According to Chuck Southam of the Ministry of Environment, water levels for Lakes Huron-Michigan are 33 centimeters below their long-term average water level for this time of year, but higher than last year. Lake Huron’s daily water levels actually rose two centimeters from October 12 “thanks to the amount of precipitation that has fallen on the lake’s surface and its drainage basin.”

“The wet weather has helped stall, and temporarily reverse, the lake’s annual seasonal decline,” Mr. Southam told The Expositor. “As a result, the lake’s level is now 18 centimeters lower than it was on October 12. Since the lake’s long-term average decline between August 2 and October 23 is about 15 centimeters, the lake has fallen three centimeters more than its average decline in the same period (August 2 to October 23) over the 1819-2010 period of record.”

“By going up two centimeters since October 12 instead of falling by three centimeters (as it has on average over the period of record) the lake’s level climbed five centimeters closer to average from October 12-23. It’s a small, but welcome improvement relative to average.” 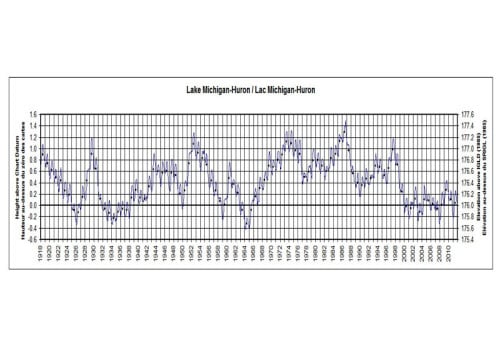 This week is Great Lakes Week in Detroit

An open letter to the candidates of Algoma-Manitoulin