EDITOR’S NOTE: This week marks the fourth installment of Olympic Odyssey by Mike Brock, an Olympics television producer for the CBC, a special for Expositor readers.

If you are the least bit inclined to engage with sports, this is the time to do it. The Tokyo Games are finally here, and this is what you need to know for the first week.

For sure, the biggest challenge to watching the Games live will be the time change. Tokyo is 13 hours ahead of Eastern Time. Night will become day, morning will become evening, and we all will become tired. But, if you park the TV on CBC and make CBC Sports your home page, you won’t miss a thing. CBC will air lots of recaps, highlights, and even re-broadcasts of the events, so if you’re unable to watch in the middle of the night, you will still be able to watch whenever you can.

The CBC, along with partners like TSN and Sportsnet will be carrying dozens of hours of live coverage on many different platforms every day of the Olympics. Plus, events will be streamed on line as they happen. Visit CBC’s website (cbc.ca/sports/olympics/summer/schedule-results) for a full schedule of events, and links to the live streams. One of the other ways to make sure you don’t miss a thing is to download the CBC Sports App onto your phone.

Make sure you check the date. The opening ceremonies will take place on Friday, July 23. But, every year, there are a few events that actually start before the cauldron is lit. This year, the first events take place on Tuesday, July 20 when the women’s softball tournament gets underway. The Canadian team’s first pitch will be at 2 am (ET) on Wednesday, July 21 when they take on Mexico. The Canadian women’s soccer team will kick off against the host Japanese a few hours later at 6 am (ET).

Here’s a daily breakdown of what you can look out for during the rest of the first week of the Olympics.

A day after the women take the pitch, the men’s soccer tournament begins. The marquee game on the first day is a rematch of the 2016 Olympic Games final. Brazil and Germany went to penalty kicks in Rio, and regardless of who wins this first game in Tokyo, both teams are likely to advance to the next round.

The rowers get in the water on Thursday, and Canada has had a great deal of success over the last few decades at the Olympic regattas. At the 1996 Games in Atlanta, Canadian rowers won six medals, led by Marnie McBean and Kathleen Heddle. McBean is Team Canada’s Chef de Mission in Tokyo and while this will be the biggest Canadian team Atlanta, with 10 crews competing in Tokyo, they may not be quite as dominant. Look for youngster Trevor Jones in the men’s single sculls. Heats for single sculls, doubles sculls and quad sculls will also hit the water.

Other sports competing today include and softball, archery (ranking round).

Grab your coffee early for the opening ceremonies on Friday morning. They’ll get under way at 7 am. The CBC stream will start at 6:30 am, and will be available in multiple Indigenous languages this year, as well.

Later on Friday—Saturday morning in Japan—the volleyballers take to the floor and the beach. The women’s beach tournament digs in at 8 pm, while the Canadian men play Italy on the hard court.

Other Canadians in action will include the softball team and the men’s road cycling team.

Swimming will consume many of the headlines for the first week of the Olympics, and Canada looks to get off to a great start. Saturday morning’s heats will feature Maggie MacNeil, the reigning World Champion in the 100-metre butterfly, Sidney Pickrem in the 400-metre individual medley, and the Women’s 4×100-metre freestyle relay. Lots of team action for Canadians to watch on Saturday, too. The women beach volleyballers continue the preliminary round. Canada’s women’s water polo team is back at the Olympics for the first time since 2004, and recently ranked as high as 6th in the world, so they’ve got a shot at the podium. The soccer team plays their second game of the group stage, taking on the 69th ranked Chile. The men’s hockey team, affectionately known as the “Red Caribou” are currently ranked 10th in the world, and will play their first match of the tournament.

Happy birthday to Mandy Bujold! The boxer, a medal contender in the fly division who just recently won her appeal to compete, turns 34 today, and will enter the ring in the round of 32. Skylar Park has a shot at a medal in Taekwondo, and the finals of the women’s 4×100-metre freestyle will look to take home a medal for the second straight Olympics. In the evening session at the pool, Canada’s youngest Olympian, Summer McIntosh, will be competing in the 400 freestyle heats, looking to continue her incredible ascension into the sport’s elites. Canada’s Matt Berger and Micky Papa will drop into competition as skateboarding makes its debut at the Olympics with the men’s street competition.

Everybody is looking forward to seeing if Penny Oleksiak can capture lighting in a bottle again, and she will compete in her first individual event today, the 200-metre freestyle. Oleksiak and youngster Summer McIntosh will be in tough against American Katie Ledecky in the 200. Canada’s other reigning world champion in swimming, Kylie Masse, should be in the semi-finals of her best event, the 100-metre backstroke. The women’s basketball team will tip off its tournament today. Led by WNBA All-Star Kia Nurse, the 4th ranked Canadians will play Serbia in their first preliminary round match.

North York’s Josh Liendo makes his Olympic debut in the 100-metre freestyle heats today. He’ll be in tough to qualify for the finals, though, against sprinters like American superstar Caleb Dressel, and Romanian phenom David Popovici. Four-time Olympian Meghan Benfeito already won three bronze medals in the last two Games, but will be looking to move up the podium as she competes in the 10-metre synchronized discipline with Caeli McKay. The team event for women’s artistic gymnastics is always a popular event and this year Canada—led by Ellie Black—could possibly be in the final, but the favourites will be the Americans, led by Simone Biles.

It’s a big day in the pool for the Canadian women. Penny Oleksiak will race the heats of the 100-metre freestyle, the event she tied Simone Manuel from the US for Gold in Rio. While the win was a surprise for everyone, including Oleksiak in 2016, she’s back in form, and should challenge for the top of the podium again. Olympic rookie Kayla Sanchez is the other Canadian in this event. Sidney Pickrem, a World Championship medallist will race the 200 individual medley, and the 4 x 200-metre freestyle relay will try for their second consecutive medal. Other sports handing out medals today include rugby (men’s), judo (men’s and women’s), 3 x 3 basketball (men’s and women’s) and rowing (men’s and women’s).

Next time, we’ll give you a daily breakdown of week two. Swimming will be finishing up, and athletics will take centre stage. We’ll have a better sense, too, of how the Canadian teams are shaping up for their medal rounds. 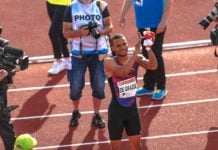