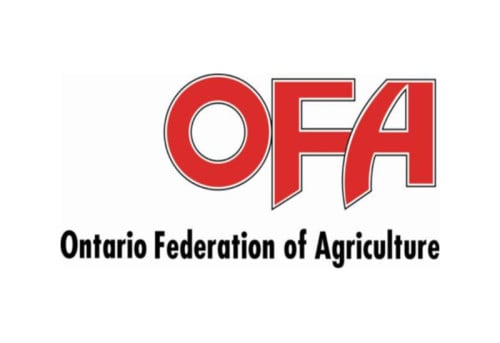 GUELPH—Escalating concerns about industrial wind turbines has prompted the Ontario Federation of Agriculture (OFA) to urge the province of Ontario to suspend further development until farm families and rural residents are assured that their interests are adequately protected.

The OFA unveiled its strong stance in a new position statement on industrial wind turbines that will be presented to government later this month.

Since 2007, when the development of industrial wind turbines began in Ontario, the OFA has worked with government on regulations, cautioned farmer members on the pitfalls of wind leases and expressed concerns about pricing. Many of these issues have not been addressed, the OFA states in a release, causing tremendous tension among rural residents and community neighbours.

“We are hearing very clearly from our members that the wind turbine situation is coming to a head, seriously dividing rural communities and even jeopardizing farm succession planning,” said OFA President Mark Wales. “The onus is on our provincial government to ensure the interests of rural Ontarians are protected. OFA is speaking up to clearly outline the issues that must be addressed right now.”

OFA field representative for Algoma-Manitoulin, Neil Tarlton, explained that the OFA fully supports moving away from fossil fuel use to green energy while recognizing that farmers are “big landowners in the province of Ontario,” but that perhaps the pace with which this is happening is too fast. “Let’s reduce the speed we’re doing this so we get it right,” he said.

“The concerns we have in rural communities are quite profound,” Mr. Tarlton said.

The OFA’s new position statement on industrial wind turbine development addresses a number of concerns of rural Ontarians including: price paid for wind power, inefficiency of wind power—it can’t be stored for use during peak demand periods, setback issues and induced currents, health and nuisance issues, removal of municipal input from industrial wind turbine projects, OFA has always supported Ontario’s need for a reliable, affordable source, of renewable energy for our future.

“We must all work together to ensure green energy projects respect concerns for noise, community involvement and price, balanced with the effective provision of energy,” says Mr. Wales.

“The OFA supports the intentions of the Green Energy Act,” the OFA statement reads. “We agree that Ontario needs to secure affordable and renewable energy for its future while reducing green house gas emissions. We encourage efforts to replace imported power, facilitate conservation and stimulate economic development through our energy requirements.”

“However,” the statement continues, “the situations regarding industrial wind turbines has become untenable. The proliferation of wind turbines across rural Ontario has seriously polarized our rural communities. Residents not engaged in turbine developments have been pitted against neighbours over concerns with health impacts and quality of life issues. Industrial wind turbine development currently preoccupies the rural agenda.”

“A balance between the province’s power requirements and local autonomy regarding land use must be struck,” the release states.

The Ontario Federation of Agriculture (OFA) is the largest general farm organization in Ontario, representing 37,000 farm families across the province. As a dynamic farmer-led organization based in Guelph, the OFA works to represent and champion the interests of Ontario farmers through government relations, farm policy recommendations, lobby efforts, community representation, media relations and more. OFA is the leading advocate for Ontario’s farmers and is Ontario’s voice of the farmer, according to the organization’s website.