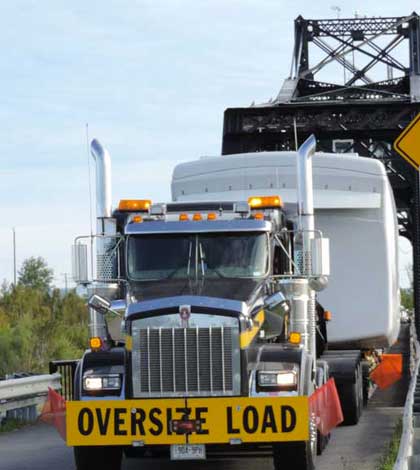 HIGHWAY 17–Manitoulin and Sudbury Ontario Provincial Police (OPP) are advising the public that as of September 16 officers will be providing escorts for the wind turbines heading to Manitoulin Island.

The escorts begin on Regional Road 35 at the Millman Yard (Day Construction) then south west on Highway 144 bypass, west onto Highway 17, then south onto Highway 6. The escorts will go over the swing bridge into Little Current to the McLean Mountain sites.

There are four escorts per day by the OPP. There are between eight to 10 loads actually being completed. The escorts start at sunrise with the last load leaving around noon, therefore there will be loads on the highways all day up until just before the five o’clock rush.

These loads run Monday through Thursday. One exception will be granted for the weekend of September 20-22 where escorts have been permitted. They will not be running on Thanksgiving Monday.