Citizens concerned for safety at bridge

LITTLE CURRENT—Manitoulin Island’s only set of lights, those found at the swing bridge, are causing a lot of contention of late as more and more drivers are choosing to not wait their turn at the red and instead, drive on through. This not only disrupts the flow of traffic on the other side of the bridge, but poses some serious safety concerns as well.

Since Islanders have begun discussing the fate of the 105-year-old swing bridge, the topic of traffic flow has been part and parcel of those talks.

Tony Ferro, a resident of Bay Estates, recently penned a letter to the Northeast Town council outlining his concerns.

“The bridge traffic lights are only manned on the hour for boat traffic if need be or only for emergency vehicles such as ambulance, fire or police,” he writes. “Between each hour the lights are on automatic mode and this is when the problems occur … There could be at times 20 to 30 cars trying to leave the Island but as soon as one vehicle activates the pressure switch on the north side the lights change to give way to the southbound vehicle while out of the 20 to 30 cars that were in line to leave the Island only a few have the opportunity to exit. This is when people run the red light and problems occur. This problem is compounded on the weekend with higher vehicle traffic.” 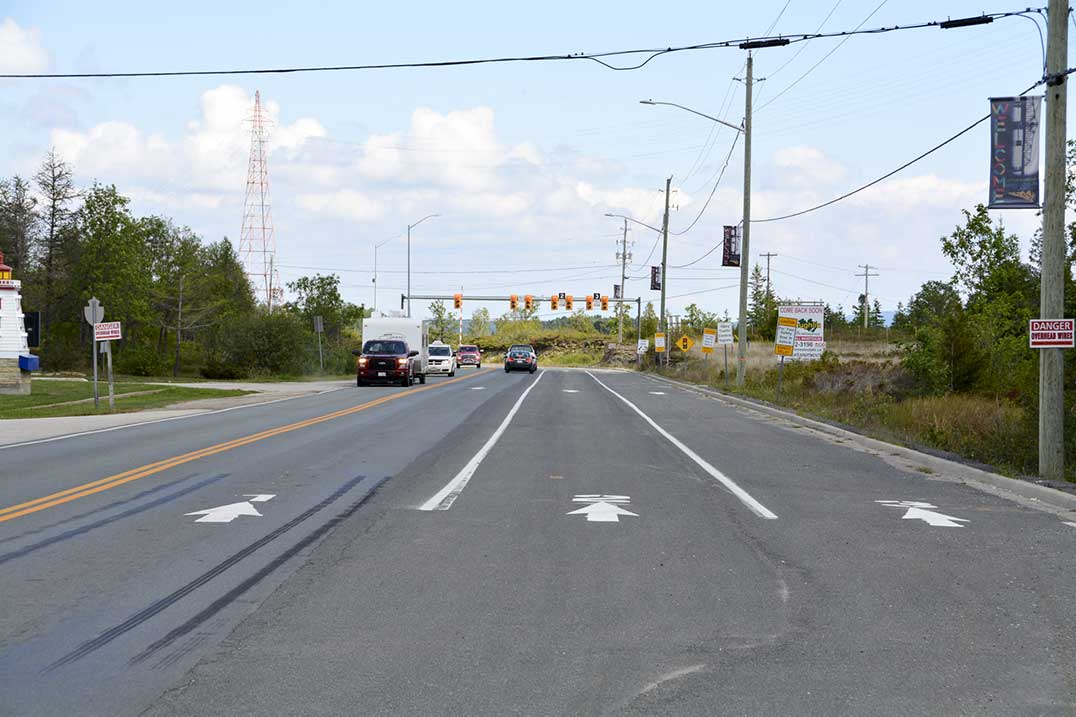 Mr. Ferro said he spoke with one of the bridge operators about his concerns and was told that the Ministry of Transportation has been approached about a traffic camera for the operators to enable a better view of the south side. At present, he said, the operators cannot see due to the high trees on that side and so are not aware “of the bottle neck that is caused on the south side of the bridge.”

According to Carole Paiement, communications services coordinator with the MTO, Northeast Region, the traffic signals are fully automated and work with vehicle detection sensors in the roadway. “Therefore,” Ms. Paiement writes, “cameras would not impact signal operations. The bridge operator only overrides the automated signals when a boat approaches to pass.”

“The ministry is currently replacing all in-ground detection systems with overhead non-intrusive systems,” she added. “This location should have the replacement system in place later this year.”

Phil Blake, proprietor of 3 Cows and a Cone, also spoke to council about his traffic concerns, and suggestions.

Mr. Blake talked of the lack of use of lanes one and two on the south side of the bridge.

“The current system is a safety issue,” he said.

Mr. Blake suggested that lane three (the far right lane) should be filled first, followed by lane two (the middle lane) and lane one (the standard lane).

“This could be in place from May to October, after which time lane one would be closed and lane two would be open to emergency vehicles only,” he said. “For the winter months, allowance must be made to ensure snow removal. Signage would be required.”

Mr. Blake has spent a great deal of time studying the driving habits of those leaving the Island and for the very few who use the alternate lanes, he noted, their light never almost turns green, forcing them to wait for an opening in the queue to get onto the bridge and off the Island.

“The traffic is a ‘right now’ concern,” he added.

The way the lanes are supposed to work is like this: The lanes all have separate automated signal phases which are intended to clear queues starting in lane one (closest to the centre line) then on to lane two and lane three,” MTO media spokesperson Kristin Franks told The Expositor in an email. “Once cleared on the south approach, the signal controller will automatically switch to the north approach if there are vehicles present. Once that queue clears it will again shift to the south approach.”

When asked why the lights seemingly aren’t activated, Mr. Franks responded by saying, “The signals are automated and work under actuated signal timing, meaning they detect vehicle presence.”

Many have called for the placement of a red light camera at the traffic lights, but this will not happen as Ontario does not permit the use of red light cameras on provincially controlled highways.

Manitoulin-Espanola Ontario Provincial Police (OPP) Detachment Commander Staff Sergeant Kevin Webb said he recognized that the running of red lights at the bridge is an issue.

“We patrol that area quite a bit,” he added, noting that within the last two weeks a red light runner had been nabbed by the OPP.

The staff sergeant said the OPP intends to keep a high visibility in the area and will enforce traffic violations whenever they can. He also urged members of the public to take note of those red light offenders.

“Police follow up on any complaints,” Staff Sergeant Webb said. “If a driver gets a description of the vehicle and licence plate number, we will follow up. It could either be a letter sent to the driver or enforcement, but we will follow up.”