﻿ST. JOHNS, NEWFOUNDLAND—“Ride complete,” stated the email subject heading to this reporter received from Peter Carter, of Evansville, who completed a ride across Canada with 20 other bicyclists on September 3, in St. John’s, Newfoundland.

“Completed the ride on September 3 at the most easterly point in North America,” said Mr. Carter. He pointed out, “the end of the ride was so special for me because the group asked me to lead them all into St. John’s and up to the top of Signal Hill which overlooks St. John’s plus out to sea to the east!”

Mr. Carter took part in the cross-Canada ride, as one of 21 bicyclists taking part in the Tour Du Canada. Riders started in Victoria, British Columbia on June 21. They travelled from Vancouver, British Columbia, through B.C. and east, eventually visiting Manitoulin Island in early August, then south to Tottenham. And eventually made their way to Mr. Carter’s hometown of St. John’s, Newfoundland.

Mr. Carter explained the Tour du Canada annual ride celebrated its 25th annual run this year. This cross-Canada ride is something Mr. Carter has always wanted to take part in. He explained before the ride began, “Life’s too short, and this ride is something I’ve always wanted to do. It will be challenging to ride 85 miles per day, but I am certainly looking forward to it. Bicycling is so relaxing and soothing for me. For many years I’ve solved issues at work, for instance, by bicycling.”

He sent a tape of an interview he did with a local Newfoundland television station on the completion of the ride to The Expositor. “We started the ride on June 21, from Victoria, B.C. and I dipped my tire in the water here in Newfoundland on September 3,” said an at times emotional Mr. Carter.

The group travelled an average of 145 kilometres every day of the ride. “It was a tremendous experience, we went to hell and back with this crew and I have made 20 new best friends that I will have for the rest of my life. It was awesome,” stated Mr. Carter.

Mr. Carter said that one of the highlights of the ride was riding the Cabot Trail in Cape Breton, Nova Scotia. He made his comments on television while standing in front of a Terry Fox statue, which was appropriate as, “when Terry started out on his famous run, I was with the St. John’s Cycling Club that rode alongside Terry out of town that day. And I was on hand among other riders when Rick Hanson ventured out on his world tour. It is pretty special to be able to relive some of these memories.” 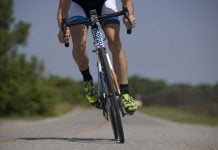