SHEGUIANDAH – Although potatoes can be a tasty treat, they can wreak havoc on the blood sugar level of people with diabetes—at least, that had been the rule until Montana State University researchers developed the Huckleberry Gold potato, which is now being harvested at Pike Lake Farms in Sheguiandah.

“This is our first year growing them. When we were looking for potatoes to grow in the spring we had never heard of these before. They’re a fairly new potato, there’s not a lot of acreage in cultivation across North America,” said Katie Cyr of Pike Lake Farms.

Ms. Cyr shared stories of friends with diabetes who have come for dinner and were unable to eat the potatoes on offer. Potatoes tend to contain a high amount of starches and carbohydrates which cause rapid spikes in blood sugar, something that people with diabetes cannot easily manage.

“There’s a lot of people with diabetes in the North, so it would be helpful here. I know potatoes would be hard for me to give up,” said Ms. Cyr.

The university researchers cross-bred two old varieties of potatoes to create Huckleberry Gold and Ms. Cyr said the seed trials have been ongoing for the past four years. These potatoes are considered a fall variety and the family has recently begun pulling them from the ground.

“Everyone who’s tried them seems to enjoy them, and they seem to be just like normal potatoes,” said Ms. Cyr. “They’re good fried and baked, boiled, you name it. They were really good when we baked them; we didn’t even need any butter. We’ve had them every way.”

These potatoes do carry one significant difference on first glance: their skin is a brilliant shade of deep purple. However, that beauty only runs skin deep and they look just like a conventional yellow-fleshed potato on the inside.

While a specially bred potato variety might imply a more detailed care regiment, Ms. Cyr said managing this new variety followed the exact same procedure as their other potato varieties.

Studies have shown Huckleberry Gold potatoes to have a low glycemic index (the ranking of carbohydrates in foods as a measure of how they impact blood sugar levels) when compared to conventional cultivars.

The Expositor could not find any reports of what the glycemic index value of Huckleberry Gold potatoes is. There was, however, a Master of Science thesis by Andy Reynaga that showed that although the compounds in the potato would suggest having a lower glycemic index than other varieties, the authors did not recommend replacing a standard russet potato with a Huckleberry Gold as a low-glycemic-index option.

The study did, however, acknowledge that Huckleberry Gold does contain a higher amount of antioxidants than an Idaho russet variety. Until more detailed test results are available, the merits of the Huckleberry Gold will remain based on the promising words by the development team at Montana State University.

Despite the uniqueness of the Huckleberry Gold and its promising nutritional content, the Pike Lake Farms team is pricing all of its potatoes the same across all three. They are currently offering Chieftan, a red variety, and Kennebec, a white variety in addition to the Huckleberry Gold. Prices are $5 for a 10-pound bag or $15 for a 50-pound bag at the farm.

For those hoping to source the potatoes closer to home, Pike Lake Farms has partnered with Orr’s Valu Mart in Little Current  to carry some of its products in store. This year, the grocery store has carried its zucchinis, cucumbers, beans, beets and garlic.

“It’s been really good. They’ve been taking quite a bit of stuff so we’re assuming they must be happy with it. We’ve been getting a lot of feedback from people saying they’ve seen us in stores,” said Ms. Cyr.

For those travelling to shop at the farm, pre-orders are preferred. Pike Lake Farms can be reached at its Facebook page or by calling 705-368-0217. 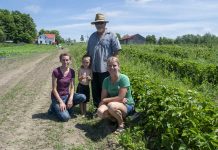