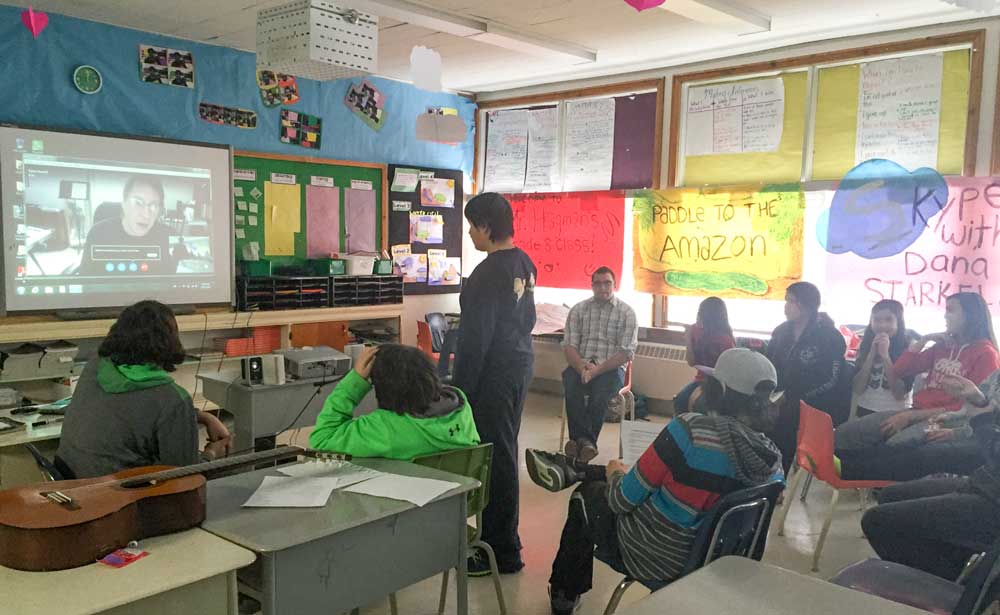 WIKWEMIKONG—The students of Blair Hagman’s Grade 8 class were preparing their questions before their second Skype session with author and adventurer Dana Starkell when this reporter had the opportunity to join them at Wasse Abin Pontiac School.

Large banners adorned the classroom to mark the occasion and to show Mr. Starkell their thankfulness at having the opportunity to meet him “in person.”

Mr. Hagman incorporated Skype into his classroom as a learning tool. Instead of just reading the non-fiction book ‘Paddle to the Amazon’ and learning about one of its characters, why not reach out and have him share his experiences first-hand with the class and be available to answer any questions the students might have, right in their own classroom. Skype allows the students to video chat with the author, with them seeing him and vice versa, on a large projector screen placed on the chalkboard.

Mr. Starkell, a teenager at the time, his father Don and brother launched their 21-foot canoe in the Red River at Winnipeg, travelling 12,000 miles to the Amazon and ending at Belem, Brazil, encountering drug smugglers, crocodiles and anacondas, hurricanes and even near death in their harrowing adventure.

“It’s almost like he is in the classroom,” one student said before the Skype session began.

“He told us to follow our dreams, to plan small to achieve big dreams,” another student added.

Mr. Hagman explained that he had read the book about 15 years ago and it always stayed with him, so he decided to use the adventure as a teaching tool for his students. Searching him on the Internet, he discovered Mr. Starkell remains in Winnipeg, now in his 40s, and has a family. He is also an accomplished classical musician. On a whim Mr. Hagman decided to send him an email. Mr. Starkell eventually responded and agreed to meet the students.

This is the second Skype meeting the class has had, as they also utilized the technology to speak with girls from Kenya and the Northwest Territories who had been a part of a Canada World Youth stop in Wikwemikong.

When the session began, Grade 8 student Travis had the opportunity to ask the first question about the portion of the book when Mr. Starkell, his father and brother were shot at. Mr. Starkell explained that two soldiers, brothers, got some rope to tie them up in the pitch black darkness. It was so dark, he said, the soldiers made his father smoke a cigarette so they could see where he was.

The Starkells lied and said the US Army was following them and that the soldiers had better leave them alone. The lie worked and they were set free.

Tyrone asked what it was like witnessing the drug trade in Colombia. 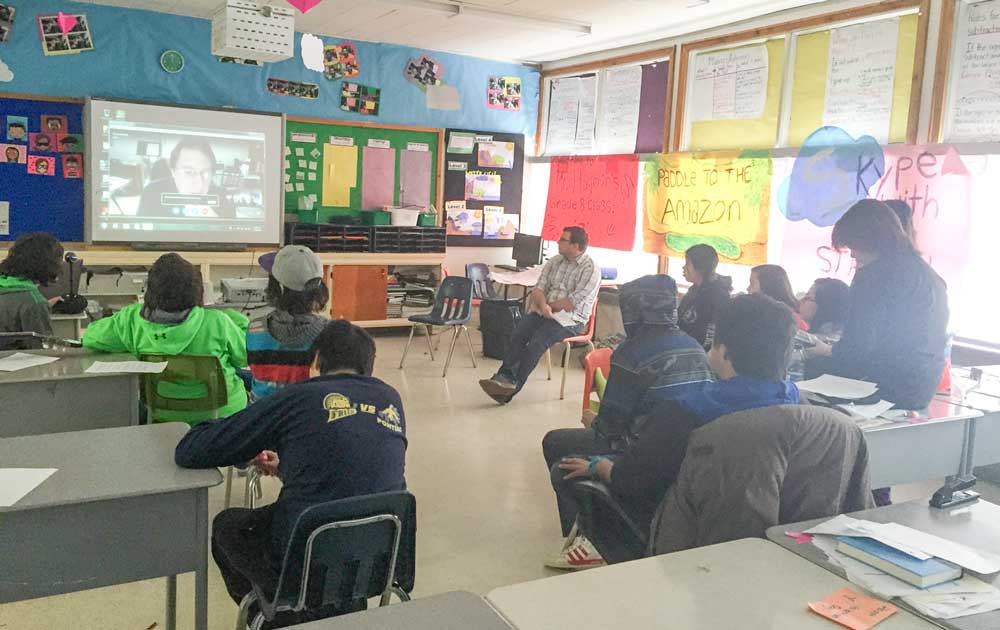 “Most people involved were native people, the same as you,” Mr. Starkell responded. “The mafia was in control and has the native people working under them. One time we saw 40 canoes paddle past in the ocean, all laden with bales of pot. Everybody pretends nothing is going on.”

He noted the native people grew it, because they had to, but never used the drugs.

He told her it would have to be stepping on a sea urchin, as its needles are filled with poison. “It feels like someone smashed your foot with a sledgehammer.”

Bernadette asked about the most interesting native tribe he met. He spoke of the primitive Wayuu people who adorned themselves with sticks poking through their cheeks. “They are super smart and super strong,” he added.

“The wisdom of the native people and their respect for Mother Earth is the only hope civilization has for survival,” he said frankly to the class, noting his deep respect for the wisdom of elders.

He then showed the class a poison arrow made by hand and the seven-foot bow that accompanies it, much to their delight.

DJ asked Mr. Starkell what it was like to work so hard to achieve a goal, finishing their adventure, only to find no one there to help mark the occasion.

“For two years we had this goal, and every day we would wake up with this wonderful sense of achievement, but once you get there, it’s over,” he said. “Canada is a funny country. ‘Hey guy, good job, see you later.’ That’s Canada, we don’t get too crazy about stuff.”

Simone wondered about life back in Winnipeg after two years in a canoe. ‘From struggles to simplicity—it’s an easy adjustment to make,” he said.

Charisma asked if he had any adventures planned for him and his son. Mr. Starkell said that he is thinking about an adventure, but one not so big, and with no oceans involved.

“The challenge is where do you draw the line between seeing things, doing things and being safe,” he said. “You need to make a plan, take into consideration the risks but don’t let the risks stop you.”

Mr. Starkell finished his interview with a quote from Mark Twain: “I’ve had a lot of worries in my life, most of which never happened” meaning, don’t worry about it until it happens.

The groups said their goodbyes, with Mr. Starkell thanking them for the opportunity to come into their classroom.