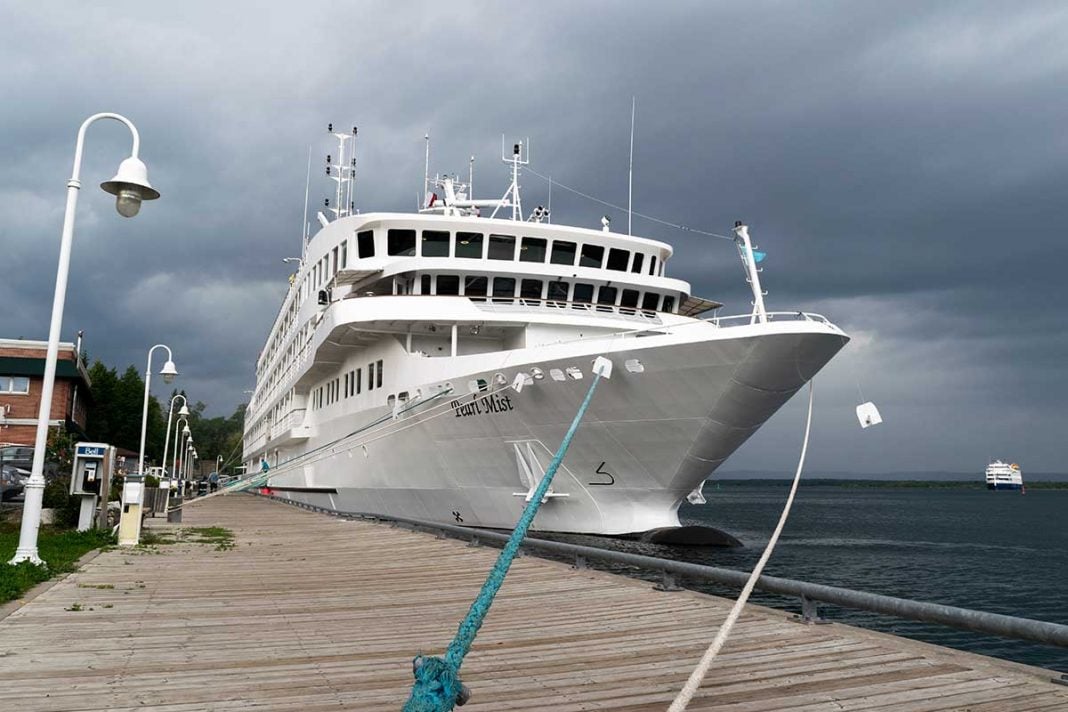 LITTLE CURRENT – The Port of Little Current announced on April 22 that it would be closing to cruise ship traffic, becoming what an observer says is the first Canadian port to take such action, which came as a surprise to an area excursion company.

“We don’t have the appropriate security measures in place to ensure the safety of our residents, our staff or the people coming off the cruise ships,” said Northeast Town CAO Dave Williamson.

Cruise ships were not scheduled to set sail for Manitoulin at any point in the near future. Transport Canada delayed the start of the cruising season until July 1 in a press release issued March 13. All ships that can hold more than 500 passengers are banned from travelling throughout the Great Lakes-St. Lawrence Seaway until at least that date.

The main cruise ships to call at Little Current, the Victory I and Pearl Mist, have passenger capacities of about 200 to 250. An April update banned all ships which can transport more than 12 passengers until the season’s new start date.

Transport Canada, in the same March 13 announcement, cancelled the entire Arctic sailing season for ships of all sizes, citing the limited health care capacity of remote, Northern communities. Although port stops in places like Toronto or Montreal would not face health care system constraints, those are a factor on Manitoulin Island (albeit to a lesser extent than a remote arctic stop).

Observers connected to the industry expect the July 1 start date to be pushed back further into the summer, possibly even to the end of the 2020 sailing season. Those dates will be adjusted by Transport Canada officials depending on the state of the pandemic at that time.

For Bruce O’Hare, whose Lakeshore Excursions business works with cruise companies to arrange on-shore activities for travellers, the prospect of Transport Canada cancelling the rest of the sailing season is likely. Little Current’s decision, however, ran against his best judgment.

“Our ask of the port was to follow the guidance of Health Canada and Transport Canada,” said Mr. O’Hare. “We thought maybe it would be a wise idea to wait and see what the rest of the country is doing, and the other Great Lakes ports, before we make the decision. That was my advice, but they chose not to do that.”

He communicated that opinion to the Northeast Town, but the port ultimately decided to opt for closure. Mr. Williamson said while many hope the season will resume by the fall, it was too uncertain at this time.

“When planning for the operation of a business, you have to make a decision on what is realistic, not hope and dream that something may change,” he said.

Mr. O’Hare, who first heard of the Little Current closure from a marine agency in Montreal, stressed that he does not want the port’s decision to be seen as negative.

The risk, he suggested, is that Little Current could potentially get a blight on its name for being the first port to close.

“There’s a reasonable chance we’ll see that going forward. I say that from working in the business for 20 years, I know how these guys think,” said Mr. O’Hare. “The long-term impacts will probably be more negative than positive.”

One factor in Little Current’s favour is its prestige as a Great Lakes port, said Mr. O’Hare. He cited Little Current and Mackinac Island as being the two most successful ports on the Great Lakes, with Little Current being one of the nicest places to tie up a ship, in his opinion.

“I worry about next year. This is never just a Little Current thing, it’ll impact the downtown merchants for sure but it really sprinkles across Manitoulin Island. The unfortunate part (if Little Current becomes less desirable) is the cruise industry is starting to grow rapidly after decades of relative stagnation,” said Mr. O’Hare.

Mr. Williamson said the implications on future traffic levels was considered in the decision and the discussions with the ship companies and booking agents did not share concerns about the port’s decision.

“We are confident that the cruise ship companies share our pandemic-related concerns and recognize that under these circumstances it was a reasonable approach, so it should not impact on future seasons,” he said. “We have bookings for 2021 and we look forward to welcoming the ships and their passengers when it is safe to do so.”

Transport Canada spokesperson Simon Rivet was unable to verify if Little Current was indeed the only port to close for the season on the Great Lakes.

“We trust that all ports across Canada are doing their part to respect all measures aimed at containing the spread of COVID-19,” he said.

German operator Hapag Lloyd last month cancelled the Great Lakes sailing of its brand-new Hanseatic Inspiration ship, which was scheduled to complete a Can-American tour of the Great Lakes in June including a stop at Little Current. The 230-passenger ship was christened this past October in Hamburg but the company stated it would be cancelling the trip due to COVID-19 risks and to encourage everyone to stay at home as much as possible.