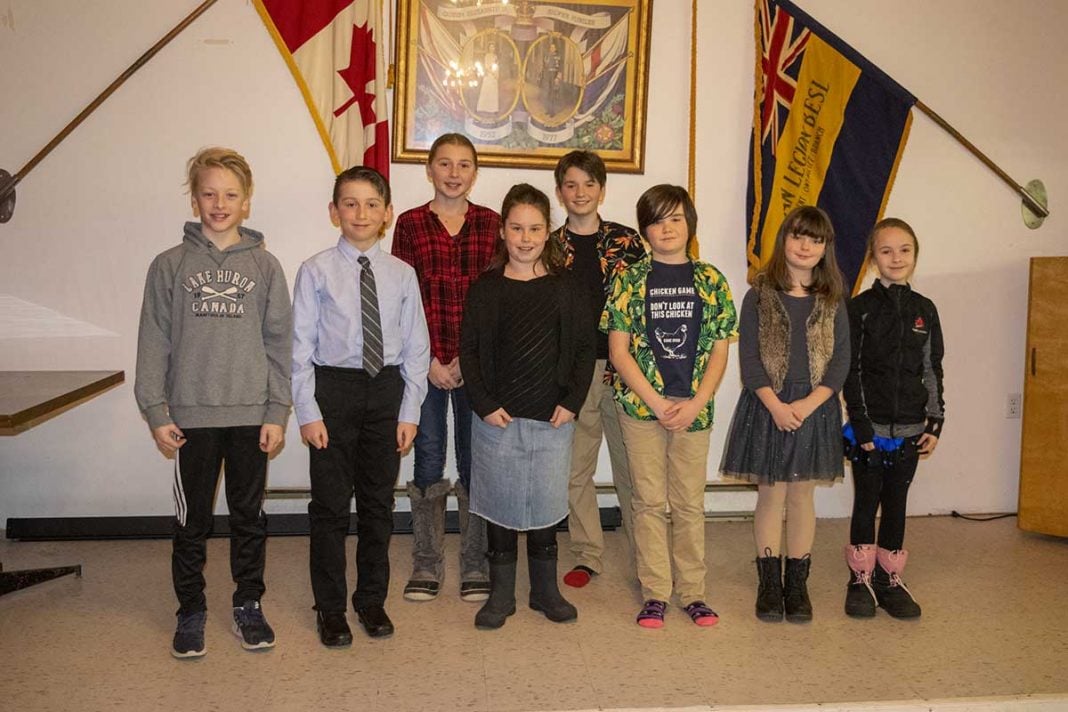 LITTLE CURRENT – Eight of eastern Manitoulin’s brightest up-and-coming public speakers faced off in a competition at Royal Canadian Legion Branch 177 in Little Current last Thursday, with the top-ranked students earning a spot at the zone-level competition within the Legion.

“We always have a great turnout, especially with the parents and friends who come out to support these kids,” said organizer Marcel Gauthier. “We’ve got some great speakers today.”

The first round of competition was for the primary division of Grades 1-3.

Little Current Public School (LCPS) student Peyton Legere drew the first speaking slot and delivered a talk about the ups and downs of living with a new puppy—her family welcomed Marley, a “goldador,” into their lives three months ago. Goldadors are crosses between golden retrievers and yellow labs.

Next up was Central Manitoulin Public School (CMPS) student Chloe Cooper who talked about giraffes and the various qualities that make them such unique creatures. She had an encyclopedic knowledge of the long-necked animals and shared interesting facts including the amount of water they consume and the fact that their tongues are dark-coloured to avoid sunburns.

In the junior division of Grades 4-6, Jaydyn Pegelo of LCPS earned the first speaking spot. She came dressed in her Skate Canada Manitoulin uniform and, as might be predicted, spoke about her passion for figure skating. Throughout her presentation she demonstrated a number of poses and discussed some history of the sport. She was also one of few presenters to speak without any cue cards.

Next up was CMPS student Jack Bridgeman who delved into the significance of the World Junior Hockey Championships and about the journey many professionals have taken to become the superstars they are today. His strong enunciation was a testament to his passion for the topic.

CMPS student Eric Wahl followed with his examination of a problem young people know all too well—chores. He talked about how the list of tasks never seem to end and how his interpretations of the work to be done never seem to live up to his parents’ expectations.

Finally, Assiginack Public School (APS) student Sebastian Mara took an interesting look at the unanswerable questions of life, centred around a monologue about what his cat Gus might have on his mind. He delved into why people seek to explain the unexplainable and why questions with no answers still have importance.

Into the intermediate category of Grades 7-9, APS student Xavier Mara was first up to the stage. He explained the process of learning new skills and becoming a master at any given challenge. Ultimately, he said, it was better to try new things and attempt to grow one’s areas of expertise even if they might not become a professional at it—even if that challenge is to become an aerospace engineer.

CMPS student Annie Balfe spoke next with a somewhat related topic; she discussed what success can mean to different individuals and about the merits to different approaches to success. Her topics ranged from the balance between winning at all costs and maintaining integrity to a question of whether one should focus on improving themselves rather than beating someone else. Ultimately, she said, it was important to focus on being the best version of oneself, and that would be considered a success.

After three rounds of judge deliberation, the winners were announced. In the primary division, Peyton took first place and Chloe took second. In the junior division, Eric came first, Jaydyn came second and Jack and Sebastian tied for third—a first, according to Mr. Gauthier. Finally, in the intermediate category, Xavier came in first place and Annie placed second.

Mr. Gauthier thanked all of the students and their supporters for making the annual event another success. He also gave thanks to the judges—Wendy Gauthier, Melissa Peters and this reporter—and wished the first-place students well on their next round of competition at the Legion’s zone level.