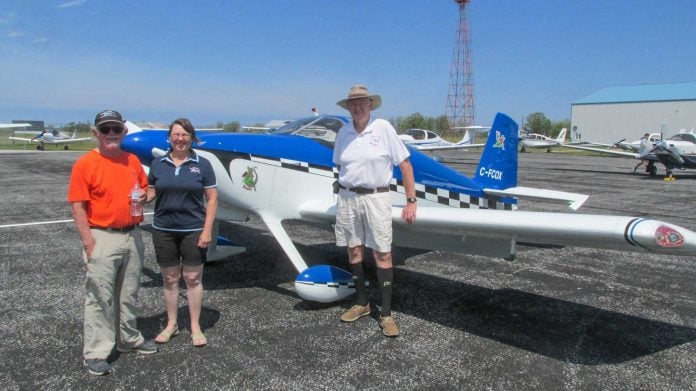 GORDON/BARRIE ISLAND – The Trillium Aviators converged from all over Ontario and even from as far as Vancouver and Victoria, British Columbia to attend a rally at the Gore Bay-Manitoulin Airport, this past Saturday.

“I’m sure excited to see so many people here today,” stated Ivan Kristensen in addressing all those at the rally. “I am from Guelph and I have to admit when it was suggested to me that we should visit the Gore Bay Airport I was unsure as it would be beyond an 180 mile radius from Kitchener, but I’m sure glad we did this with all the support and enthusiasm we see here today.”

Mr. Kristensen explained to the Recorder, “we probably have almost 100 members on an email list; we are not a club or an association. I have an email list that I keep track of and update everyone on about upcoming trips.”

He  pointed out many of the members took part in a rally in Collingwood in June. “The list of members we have are from areas like Timmins, Ottawa, Windsor, Sudbury, Hamilton, Kitchener, Elliot Lake and Ottawa. “Yes this is the first time we have visited the Gore Bay airport. I am absolutely flabbergasted at the response we have had to this visit; we even have one couple from Vancouver, and another couple from Victoria.”

The Trillium Aviators make about 15 such trips to various airports in Ontario in a year. A total of 26 airplanes were here on the weekend and that at one held in Wiarton a while ago there were 36, he pointed out.

“Our membership has grown way beyond our expectations,” Mr. Kristensen told the Recorder. “Especially now with the pandemic, people just want to get out and do something. Today we are holding a brown bag lunch with social distancing; we have to respect the physical social distancing protocols.”
“We have all types of general aviation aircraft here, both privately operated and owned aircraft,” continued Mr. Kristensen. “They are almost all single prop aircraft and about half of the aircraft have either two or four seats in each.”

There were Cessnas, Pipers, Mooney, Cirrus, Beachcraft and other aircraft on hand.

As for whether the group will ever visit the Gore Bay-Manitoulin Airport again in the future, Mr. Kristensen said “definitely.”

Robby Colwell, airport manager, welcomed all the participants at the rally. “We would like to welcome everyone to this great place called Manitoulin Island and welcome to our airport. It is great to have all of you here today. I see many faces that I recognize and many new faces here today.”

Mr. Colwell explained, “we recently received some very good news from the government In terms of major funding that is coming our way. We have received over $4 million which we will be using for renovations-rehabilitation of this airport over the next few years,” he said. “We have until 2026 to spend the funding.”

“We will be taking the wrecking ball to this 73-year-old terminal building and constructing a new terminal building,” said Mr. Colwell. Among other upgrades to the airport are a helipad, expansion of the secondary runway and enhancements to security and wildlife fencing among the list of renovations. The project will improve passenger safety and security, emergency responses and the flow of traffic.

“This is great news for the Gore Bay-Manitoulin Island Airport and aviation in general,” continued Mr. Colwell. “Don’t be strangers here. We thrive as more planes and pilots visit; there are no more important visitors to the airport as you are. As the work progresses we will be even better prepared to serve you in the next few years.”

Mr. Cox told the Recorder, “Ivan is a good friend of mine and my wife Joan and I were going to Hornepayne this morning along with Russ and Beth Popel (from Victoria) who were in their own plane. I received an email from Ivan that the group was meeting here at the Gore Bay airport. I looked on my iPad and found out we were only an hour and a half from Gore Bay, so we decided to meet the group here. I didn’t say anything to Ivan. He certainly did a double-take when I showed up at the gas pumps.”