TORONTO—Rebecca Dawson, the 2016-2017 Providence Bay Fair Ambassador, proudly represented Manitoulin and the Providence Bay Agricultural Society at the Canadian National Exhibition (CNE) Ambassador of the Fairs this past weekend in Toronto.

“This weekend went fantastic,” Ms. Dawson told The Expositor. “It was a wonderful opportunity and I made great new friendships.”

Ms. Dawson said she arrived in Toronto last Thursday, with the CNE Ambassador of the Fairs starting on Friday morning.

“We had workshops on public speaking and leadership,” said Ms. Dawson. “We also had free time to explore and experience the CNE. Lots of people stopped us to ask about the competition and we were able to explain that it focuses on agriculture and being an ambassador for our community.”

Ms. Dawson also had the opportunity to participate in a mardi gras parade along with her fellow contestants and attend the Warriors Day Parade.

“A small group of ambassadors and myself attended the Warriors Day Parade which honours veterans,” she shared. “It was very moving.”

Ms. Dawson also had a one-on-one interview with a panel of judges, which included representatives from the Ontario Association of Agricultural Societies and past CNE Ambassadors.

She joined 61 other contestants from across Ontario, but noted that she was the ambassador who came from the most Northern community.

During the actual pageant, each ambassador walked on a stage as a biography was read about them. They then introduced themselves.

“The top seven ambassadors were chosen to complete speeches based on their interviews,” Ms. Dawson explained. “Based on the speeches, the top three were selected and had to answer questions about Canada, in honour of Canada 150.”

Although Ms. Dawson didn’t make it into the top seven, she said she was honoured to be able to represent Providence Bay at the competition.

“It was a fantastic opportunity,” said Ms. Dawson of representing Providence Bay at the CNE. “I have always been really involved in the Providence Bay Fair so it was fantastic to be able to represent my community and share what makes our fair so special—our fair may not be a big as others, but it has a big spirit.”

“For more than 40 years, young representatives from fairs across Ontario have competed to become the Ambassador of the Fairs,” states the CNE website. “This year-long title takes the winner across Ontario as a representative of the CNE and all agricultural fairs. Since its inception in 1971, more than 3,000 young people from 100 communities throughout the province have taken part in this illustrious contest.”

Ms. Dawson said she was happy for this year’s Ambassador of the Fairs winner, Erica Sayles from the Paris Agricultural Society, who she said is a friend and fellow University of Guelph student.

Ms. Dawson is 18-years-old and from Spring Bay. She is going into her second year at the University of Guelph for environmental science.

This past Friday night, Michelle Campbell was named the 2017-2018 Providence Bay Fair Ambassador and will attend the CNE next August. 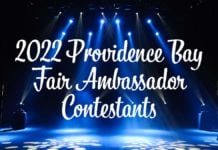