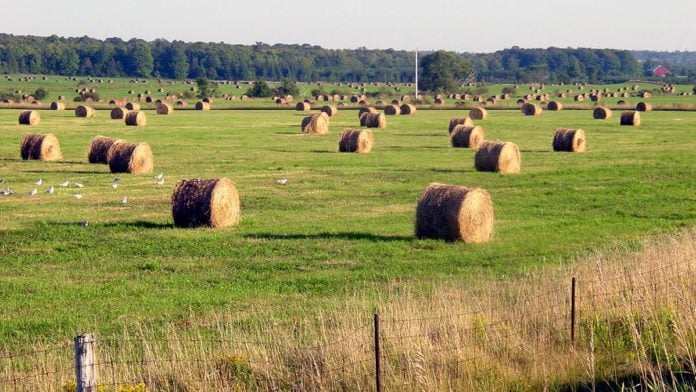 ﻿MANITOULIN—Lines of round hay bales wrapped in white plastic are a common sight on Manitoulin farms. A 2011 study found that Ontario farmers use nearly 7,000 tonnes of plastic as part of their annual operations, with plastic film such as silage film and bale wrap accounting for nearly half of that. As the world reduces, and ultimately eliminates, its use of single-use plastic, farmers are also looking for ways to reduce their dependence on plastic.

“Prior to the pandemic, there was a lot of talk among the general public in a push to reduce and eliminate single-use plastic waste,” Christine O’Reilly, forage and grazier specialist with Ontario’s Ministry of Agriculture, Food and Rural Affairs (OMAFRA) told attendees at Manitoulin Beef and Crop Info Day last Wednesday, March 24. “Things like straws at restaurants. Things like plastic bags at the grocery store. Some of that got sidetracked when the pandemic hit because of infection management, trying to reduce the spread of disease. But as things start opening up, as restrictions are relaxing, I fully expect the public to pick that up again.”

“In my own opinion, when the general public gets a good handle on their single-use plastic waste, they’re going to point the finger at us,” she said. “It’s good to hear that cattle producers on Manitoulin Island are already thinking about that.”

There are few viable options at this time, however. When properly baled and stored, hay can last a long time without degrading in quality. Net wrap is one way to do this; plastic bale wrap is another. Net wrap is a woven plastic material that sheds water well when used on round bales, but net wrap balers may also be cost prohibitive, according to one farmer. Hay driers and indoor storage are other options but are more costly.

“How do we deal with this plastic problem? I wish I had solid answers for you, but I’ve just got more questions,” Ms. O’Reilly said.

Back in 2016, there were two separate groups of students that both invented promising alternatives. One group, high school students from Russell, Ontario invented an eco-friendly alternative to bale wrap called YAY Bale. YAY Bale was an all-natural wrap that is biodegradable, even edible. It could be shredded and left on the field or mixed with livestock feed. One of its main ingredients was corn fibres, to make it stronger and more durable.

The product was the result of an international student challenge to design and market a product that addresses a real world problem. The wrap looked promising: at the time, it was presented to members of their local agricultural community, business people and even a chemistry professor. None said it wouldn’t work. YAY Bale even made it to the world finals of the Innovation Challenge, one of 20 teams chosen from over 600 teams from 23 countries.

Although YAY Bale has a social media presence, it hasn’t been active since 2016.

Around the same time, three Ph.D. students at Imperial College London (United Kingdom) invented their own edible bale wrap. The biopolymer wrap, called BioNet, was developed specifically for wrapping hay and silage. A patent was applied for while the team looked to conduct official testing.

One of the group, who call themselves BioNet Agriculture, had grown up on a farm and noticed his parents’ beef herd created a lot of wrapping waste. One cow had died after eating the waste. The trio not only fed it to the cattle in a test, but also ate it themselves with no ill effects.

A website dated 2016 notes the venture is in early stages “but the vision is far reaching.” BioNet Agriculture were winners of the Venture Catalyst Challenge at Imperial College, winning a £10,000 and were also awarded the most promising start-up award which included an additional £2,000  prize.

“Everything is quiet,” said Ms. O’Reilly. “Since those initial news releases, I can’t find any information. I don’t know if either or both of them succeeded in getting a patent and proceeding with commercialization.”

Another promising option comes from a corn-based bioplastic film developed by an engineering professor at the University of Guelph. “The formula she’s had success with didn’t specifically work on anything that would be useable for silage or baleage,” Ms. O’Reilly said. “That particular formula doesn’t solve our particular problem but I have talked to her. I know she’s very interested in doing more silage and changing the formula to work for silage.”

Many farmers are aware that Northern Ontario Farm Innovation Alliance (NOFIA) had a pilot project underway, compacting baleage plastic on farm so that it could be recycled. Emily Potter, executive director for NOFIA, told The Expositor, “Obviously COVID created some challenges and we couldn’t be on the ground as much as we would have liked to for this project, to get compactors in use and to get farmers using them. This was one that definitely needed to be hands-on,” she explained. It’s meant that the scope of the project has become smaller than initially planned.

There was a problem with the original end-user. “Again, because of COVID, he had a lot of delays and ultimately was not able to get up and running. We pivoted to find some alternate end-users, so as we come to the end of this pilot, and we are focusing on collective plastic off farms for people who have gotten involved, participating in the pilot over the last couple of years. We will be collecting all of that plastic and shipping it to a couple end-users in southern Ontario throughout the spring and summer,” Ms. Potter said.

“The thing about the compactors is, at the very least, the plastic will be compacted, allowing it to be stored away in a lot smaller sized space. That’s one good thing, even if we had to scale down the project.”

“It was essentially a pilot project to pull together data and see if this was a framework that would work,” said Ms. Potter. If the project were to proceed long-term, NOFIA won’t be driving it. Someone else may be interested in moving it forward, but that’s another unknown.