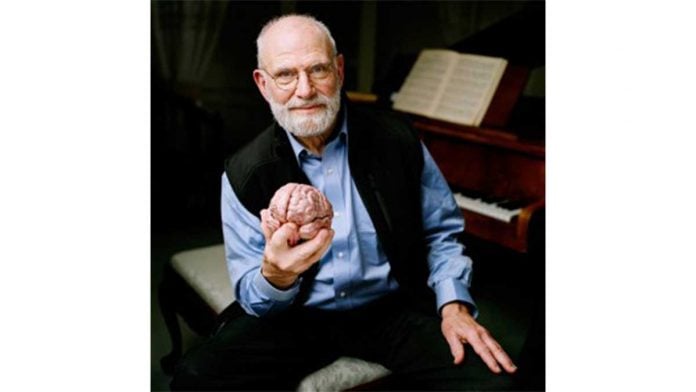 MANITOULIN – Like a lot of her former flock, retired Little Current United Church minister Rev. Faye Stevens has been spending a lot of time online these days as she maintains physical distance in her St. Joseph Island home. It was while surfing the Facebook page dedicated to her old alma mater, Central Algoma High School, that Rev. Stevens came across a post from “someone I used to teach with” that contained a link to an interesting interview with the late Dr. Oliver Sacks.

Dr. Sacks was an international icon of neurological science and the best selling author of ‘Awakenings,’ among other books, in which he explored the long-term impacts of “a less remembered pandemic,” the so-called ‘sleepy sickness’ or more scientifically labelled encephalitis lethargica, which rampaged across the globe from 1917 to 1927, killing or incapacitating as many as five million people in its wake.

In ‘Awakenings’ Dr. Sacks describes his encounters with a number of sleepy sickness survivors, referred to as post-encephalitics, in the late 1960s, some 40 years after their initial illness.

Working in a Bronx hospital where he helped care for those whose lives were altered by the disease, Dr. Sacks discovered “a new bond: that of commitment to the patients, the individuals under my care. Through them I would explore what it was like to be human, to stay human, in the face of unimaginable adversities and threats. The intensity of feeling for these patients bound us together as a community.”

Rev. Stevens was familiar with the writings of Dr. Sacks, anointed as “the poet laureate of medicine” by the august New York Times through her own studies as his writings and her interests often coincided.

Dr. Sacks’ long-time editor Kate Edger said in her notes on ‘Awakenings’ that he paid tribute to the many other healthcare providers who “also dedicated themselves, spent countless hours in the hospital.” Going on to quote the author, “All of us involved with the patients—nurses, social workers, therapists of every sort—were in constant communication: talking to each other in the passage, phoning each other on weekends and at night, constantly exchanging new experiences and ideas.”

“I used to be very fond of going to an island in Lake Huron, Manitoulin,” recalled Dr. Sacks in the interview clip bearing the subhead ‘Falling in love with Manitoulin Island, Lake Huron.’ “I fell very much in love with Manitoulin when I went there in ’79,” he said. “I was trying to write and writing some of my lake book. I was listening to music a lot.” He recalled that one of the two tapes he rotated was a Mozart Mass in requiem.

“I wandered a lot around Gore Bay, which was the chief town on Manitoulin,” he said. “I talked to a lot of people. I was in a strange mood, I normally never start a conversation, I am rather shy and rather diffident, but I found myself opening conversations—I even went to church on Sunday because I enjoyed the feeling of the church and the singing and the feeling of community. As I left after six weeks I was approached by some of the elders in Gore Bay with an astonishing proposition.

“They said ‘you seem to have enjoyed your stay here. You seem to love the place and to love us, and I think we love you.’ They said ‘our general practitioner for 40 years has just retired; would you be interested in taking his place? The province of Ontario will give you a house. How would you feel about being a village doctor in Manitoulin?’”

The offer moved Dr. Sacks to tears and he said he thought about it.

“But when I was realistic rather than romantic about it I thought ‘this can’t work’,” he recalled. But Dr. Sacks noted that in an interview many years later with Eric Candell and was referred to as a public intellectual Dr. Sacks corrected him. “I said to the audience that’s absolutely wrong,” he recalled. “I said ‘basically I am a village doctor.’ The notion of myself as a village doctor is there even though I couldn’t become one on Manitoulin.”

The interview, and those of many other famed scientists and other luminaries can be found online at WebOfStories.com. The site began as an archive of life stories told by some of the great scientists of our time but has since expanded to include a broader range of storytellers with the aim to “provide an archive of stories from people who have influenced our world. Imagine, in a hundred years’ time, future generations being able to watch people like Stan Lee, Doris Lessing or James Watson telling stories about their lives and their achievements.”

Dr. Sacks is best known for his collections of neurological case histories, including ‘The Man who Mistook his Wife for a Hat,’ ‘Musicophilia: Tales of Music and the Brain’ and ‘An Anthropologist on Mars.’ ‘Awakenings,’ his book about a group of patients who had survived the great encephalitis lethargica epidemic of the early twentieth century went on to inspire the 1990 Academy Award-nominated feature film by the same name starring Robert De Niro and Robin Williams.

For Rev. Stephens, the opportunity to glimpse Manitoulin through the eyes of one of the greatest minds of our age was priceless.