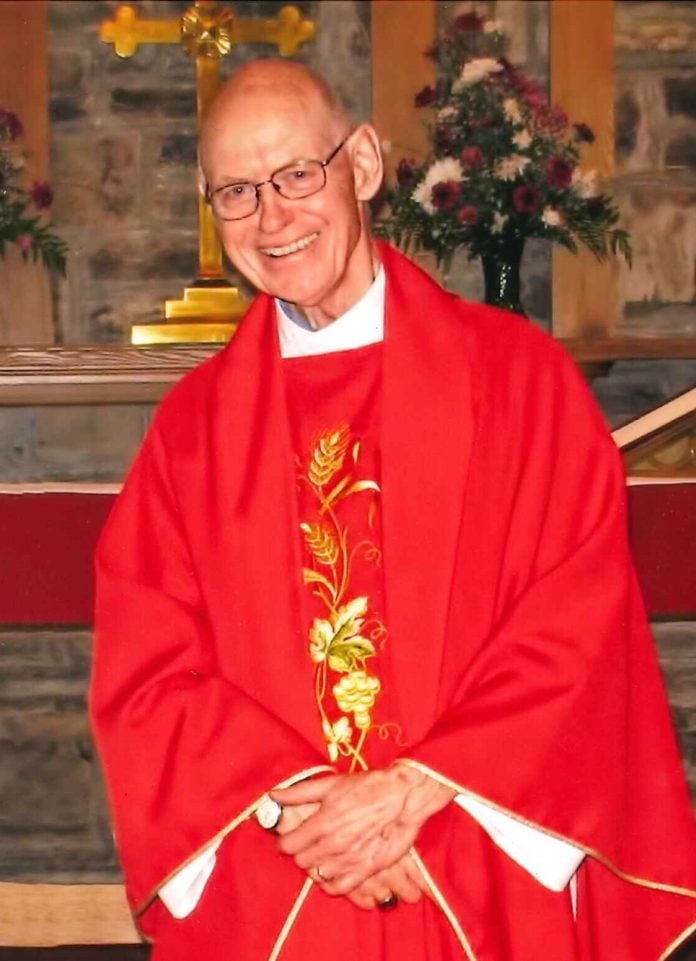 REVEREND CANON J.BAIN PEEVER
January 28, 1937 – June 23, 2020
It is with great sadness that we announce the peaceful passing of Reverend Canon J. Bain Peever on June 23, 2020 at the Manitoulin Centennial Manor at the age of 83. He is survived by his second wife Lynda Peever, son Bruce (Julie), daughter-in-law Morag Maskery (Stephen), stepchildren Brenda Kankaanpaa (Kari) and Keith Finnila (Taylor). Bain will be sadly missed by his grandchildren Erica, Kate, Liam, Jacob, Thomas, Brendan and Sara, as well as his sister Dawn Clarke, niece Marina Clarke (Andrew) and great-nephew Reece Northcutt. Predeceased by his first wife Clara Dale (Clermont), son Dr. Alan Peever and his parents Johnston (Johnny) and Olga (Parcher) Peever. Bain was the child of a devoutly Anglican family and dreamed of becoming a priest at an early age. He graduated from Concordia University and McGill University and was made a priest in 1963. This month Bain would have celebrated the 57th anniversary of his priestly ordination, a calling he lived out faithfully and with great devotion to those he served. Bain needed no fixed pulpit to preach God’s word, he used every opportunity in a respectful, kind way to spread The Word. His first parish was The Mission of Mindemoya and Kagawong, in Algoma Diocese in 1963. Then he became curate at St. Luke’s Cathedral in Sault Ste. Marie. In 1969 he became Director of Christian Education & Youth Ministry and support worker for clergy in the Diocese of Newfoundland and Labrador. In 1975 he returned to Ontario, with his wife Dale and two sons Bruce and Alan, to the Diocese of Ontario. He first became a Canon at St. George’s Cathedral. In 1980 Bain became the incumbent at Trinity Anglican Church in Cornwall and is remembered for asking Queen Elizabeth II to come to Cornwall in 1984 to help the church celebrate it’s 200th Anniversary, which she did. In 1988 he moved on to St. John the Evangelist in London, Ontario and then retired and moved back to Manitoulin Island where he and his first wife had transformed their summer cottage into a year-round home. Bain was asked to come out of retirement and take over Great Spirit Island Parish from 1998 to 2013. Bain was an extrovert, a great leader, his presence was “larger than life” energy with a lively sense of humour. Bain’s personality was such that people were drawn to him and who could say “no” to one of his requests. He loved to party whether he was hosting or organizing one. He was a dedicated mentor to many priests in training. He will be remembered for his love of people, especially with young people at Camp Manitou, organizing canoeing trips in Algonquin Park and conducting Folk Masses at St. Luke’s Cathedral in Sault Ste. Marie, as well as being the number one fan of the Toronto Maple Leafs. Cremation has taken place. Interment, Mindemoya Cemetery. As expressions of sympathy donations may be made to St. Francis of Assisi Church, Camp Manitou or the Alzheimer’s Society.