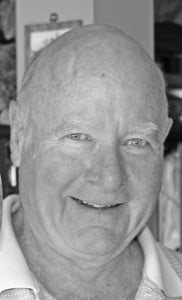 Robert John Simpson, age 69, died peacefully at Manitoulin Health Centre after a brave year-long battle with cancer on Wednesday, February 1, 2012. He is survived by Anke Groenevelt of Little Current, his partner of 15 years and his former wife Margaret of Kingston, his children Robert Jr. (Belinda) of Kingston, Brenda of Toronto, Barbara of California, his grandchildren Jenna, Justin, Dylan, Olivia, Marissa, Elise, his great-grandchild Laila, his sister Eleanor of Toronto. Predeceased by his parents Gertrude and Ernie and by his sisters Marlene and Nan, and former son-in-laws Glenn Bot of Sudbury and Zachary Kephart of California. He is loved and missed by family in Holland. Bob was born in Kingston, Ontario on February 27, 1942. He graduated from Kingston General Hospital as a Radiologic Technician in 1963. He moved to Sudbury in 1967 and was the head of the Radiology department at Sudbury General Hospital until 1980. He then operated seven locations of Northern Radiological Services until 1990. Bob lived every moment of his life to the fullest. He travelled the world, but always looked forward to returning home to his beautiful place on Manitoulin Island that he built in 1972. He loved to walk on White’s Point Road each day, and his hobbies included powerboating, skiing, pickleball, sailing, reading, and skating with his children and grandchildren. The wake services were on Saturday, February 4, 2012 from 7 pm to 9 pm at Island Funeral Home, 36 Worthington Street, Little Current. The funeral service was held on Sunday, February 5, 2012 at 2 pm at St. Bernard’s Church, 19 Hayward Street, Little Current. In lieu of flowers, Bob requested donations be made to the Manitoulin Health Centre’s fundraising campaign for new X-ray equipment. Please contact 705-368-2300 Ext 2506 or 2508 or mail donations to MHC Tree of Life Campaign, c/o Derek Graham, Box 640, Little Current, Ontario, P0P 1K0. Cheques should be made out to “MHC Tree of Life Campaign.” Arrangements entrusted with Island Funeral Home.