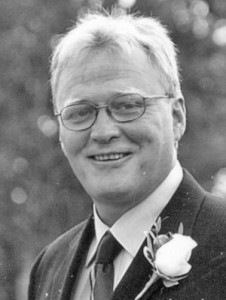 It is with great sorrow that we announce the passing of Roman Dmytro Szewczyk on January 22, 2012 at the age of 55 after a brief but intense battle with cancer. Beloved husband of Lise Szewczyk (nee Deschamps) of Hanmer. Loving father of Christina (partner Jeff Pyoli) of Gatineau, Catherine (partner Jimmy Leblanc) of Ottawa, and Lily of Pet Save. Dear son of Dmytro and Yaroslawa Szewczyk, both predeceased. Roman is survived by his siblings Luba (Doug), John (Betty) and Natalie (Mooshka). He will be sadly missed by many brothers and sisters-in-law as well as nieces and nephews. Roman was born and raised in the Sudbury area, but spent several years living and working in places such as Foleyet, Montreal and Toronto before settling in Hanmer. He worked hard to provide for his family, including as a Signal Mechanic for CN Rail and Production Employee at Brake Parts Canada. Roman had a knack for working with his hands and was often called upon for odd jobs. He enjoyed bowling, movies and being outside. His favourite pastimes were golfing and watching hockey, especially the Montreal Canadiens. Resting at the Jackson and Barnard Funeral Home, 233 Larch Street, Sudbury. Friends may call from 2 pm – 4 pm and 6 pm – 9 pm on Wednesday, January 25, 2012. Panakhyda at 7 pm on Wednesday. Funeral Mass in St. Mary’s Ukrainian Catholic Church, 40 Notre Dame Avenue, Sudbury, on Thursday, January 26, 2012 at 10:30 am. Cremation at the Park Lawn Crematorium. Donations to Toronto General Hospital Head and Neck Unit and Northern Cancer Foundation.