LITTLE CURRENT— When Little Current’s Linda Case headed out on a vacation with her boyfriend Mark Schraeder, she had no idea she was in for the surprise of her life— a proposal at 30 thousand feet.

Linda and Mark met online just over a year and a half ago, making an immediate connection through their mutual interests and strong family values.

After falling in love, Mark moved from his home in Chelmsford to Manitoulin to start his life with Linda.

After a busy year of moving and settling into a new life, the couple decided to take their first vacation together to Cuba.

“A little while before we left I decided that I wanted to propose on the plane,” Mark told The Expositor. “I asked her parents for their blessing and her daughter Kayla and son Davis and Kayla and I went together to pick out the ring. I bought Linda a promise ring for our six month anniversary and when we went back to get it sized we looked at some rings and she fell in love with the Vera Wang collection.”

“As we browsed the Vera Wang rings, the saleswoman told Kayla and I to count to three and each pick a ring to narrow it down,” continued Mark. “We ended up picking the same ring so I knew that was the one.”

The next step was asking the airline if he could propose on their flight to Cuba.

“I called the travel agent and she said she would check,” Mark said. “The Friday before we left the CAO of Sunwing called and wanted to know more about our story. I explained I was just looking for permission, but the CAO said that the stewardesses would have everything ready to help make it special.”

“When the seatbelt light went off I pretended I had to go to the bathroom,” he further explained. “I gave my phone to one stewardess to videotape it, and they handed out glasses of champagne to everyone. One of the stewardesses called Linda up to the front of the plane with me, saying they wanted to congratulate us on our first trip together. I took the microphone and talked about how we first met and then I went down on one knee. She was pretty shocked and emotional, but she hugged me and said yes.”

“We may have been in the air for an hour when the stewardess made an announcement,” Linda added, sharing her side of the story. “She said, ‘Now that we have our glass of champagne we now would like to share the glass with a celebration we have today on this flight. I would like Mark and Linda to step into the aisle.’ That is what I heard but thought, ‘that is not us.’ Mark said, ‘that is us’ and he gave me a nudge. I said, ‘no, why would we be asked to stand?’ He gave me a push into the aisle and then a push to go to the front. I was a little stiff and refusing to move not knowing what was going on but Mark has not led me astray before and he seemed to have control of the situation. I am thinking at this time they must do something different on this flight, like allow birthday announcements or anniversaries. Mark is heavy into those events and I figure he has told them something and yes, sure enough, the stewardess hands over the mic.”

“I am like ‘oh my, no one else is in front of this huge loaded plane’,” continued Linda. “It is small quarters in the front of the plane but Mark began to tell our story. He told his story and the then passed the mic back to the stewardess and reached into his pocket and dropped to one knee. Well it was not till then that I knew what all the fuss and excitement was about. He is a man excited with every day but this day was stronger. I have never had such a huge surprise in my life. I so wish I could relive that whole day. I cannot even begin to tell how I felt that moment or the rest of the day. The plane erupted with cheers and applause intensely after I bent down and kissed him and said yes.”

After a round of applause and a cheers from the passengers on the flight, Mark and Linda settled back into their seats with a bottle of champagne, courtesy of Sunwing.

The five star service didn’t stop when the plane landed, instead of hopping on the tour bus to the resort, they were whisked away to their own private car and Linda was presented with roses. Sunwing also sent along a photographer to document the beginning of the couple’s trip.

“We were really surprised by the car and roses,” said Mark, “and after arriving at the resort, we were surprised with more roses and champagne and a tour of the resort from the manager. Each night we were given special treats in our room from chocolate dipped strawberries, flowers, to more champagne. It was really the royal treatment.”

“We were told that some of the photos that were taken would be in the Sunwing wedding magazine, but we just thought maybe a small one in the back,” Mark said, “but when we got home and the magazine came in the mail there was a four-page spread of photos and our story. It was really cool.”

“Mr. Wow, what I called Mark when we first started dating, came true to the name that I gave him in the beginning,” concluded Linda. “He is such a kind, gentle and thoughtful man. What a surprise. I knew things were great in our relationship, but never did I think it was going to happen this holiday because there was so much going on at the time with our busy life of Mark moving in and us making a home together. This surprise moment will be a cherished moment in my life forever. The CAO of Sunwing said that no one had ever asked to do this in her 27 years with the company. Mark always loves to surprise me with things but this was a big one.”

Mark and Linda are enjoying life on Manitoulin and are happily planning their wedding for next summer with the ceremony to take place at the Green Bay United Church where Linda’s parents were married 50 years ago. 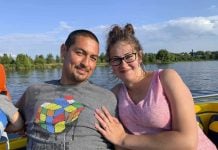