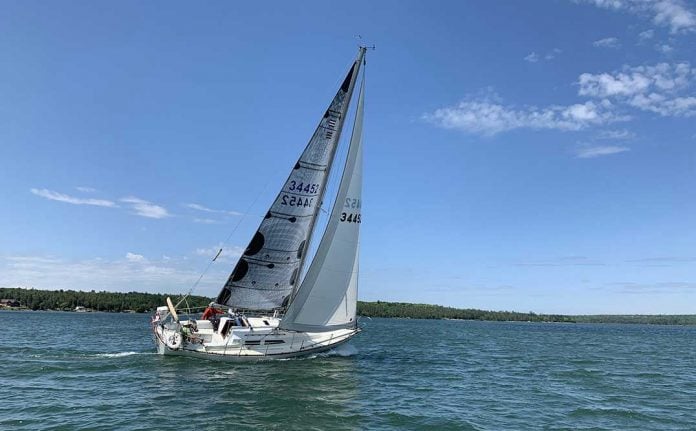 London man grateful to be alive

CLAPPERTON – A London, Ontario sailor relates a valuable lesson for anyone who runs into trouble or distress on their boat should they need to call for help when they encounter problems on the water—press the distress button on your radio.

“I had an medical emergency recently (July) when I was sailing on the North Channel. I had anchored at Clapperton Island and was trying to make my way back to Little Current,” Chris Milne told the Recorder in an interview with the Recorder on Monday. “I was already not feeling well, but I thought I could make it back to Little Current. I was wrong.”

“I really didn’t understand the seriousness of my situation and felt it was something that I could shake off. I had taken some medication for my diabetes and it had affected me,” said Mr. Milne. In turned out that he had suffered a kidney failure.

Mr. Milne explained, “when I realized I was not going to be able to make it back to Little Current I called the Coast Guard. I gave them my longitude information but I couldn’t provide my present latitude longitude,” before he passed out. “In hindsight I should have pressed the distress button on my radio.”

Mike Coomes, a Kagawong boater, informed the Recorder in an email that, “on Wednesday afternoon we heard a mayday message put out on the marine radio. We soon learnt it was in the area of Clapperton Island which is very near Kagawong where we live. As the incident progressed it became clear it was a medical emergency for the single sailor aboard his sailboat. The OPP boat was sent to deal with the emergency. When they located the sailboat it was now in West Bay. They boarded the boat and found the sailor unconscious. They then proceeded to transfer him to their boat and then into M’Chigeeng where the ambulance was waiting to take him to hospital.”

“The sailboat was then drifting slowly in West Bay. Another boat located the sailboat and stayed with it until the Coast Guard Auxiliary boat from Gore Bay came on scene and towed the vessel into Kagawong Marina,” wrote Mr. Coomes. “I went to the marina to check on the boat and found it had come up from Sarnia (where Mr. Milne keeps his boat). I was able to find out the name of the sailor so we could try and contact his family.” Mr. Coomes pointed out the Kagawong marina has taken good care of the boat since the incident.

He further explained that on July 26 he spoke to Mr. Milne who was recovering in hospital in Sudbury. Mr. Milne relayed the details of his adventure to Mr. Coomes. The sailor had started out from Sarnia on July 15, with his first stop being Heywood Island, then travelling onto the Benjamin Islands, then to Harbour Island and Clapperton. While at Clapperton on the morning of Wednesday, July 20, “he started to feel unwell, so he decided to up anchor and head for Little Current. He is a diabetic and had different medication prescribed about eight weeks ago and was to gradually increase the dosage, and he was doing exactly that,” said Mr. Coomes.

However, “when he had sailed a short way he became weak and felt as if he was going to faint. As many of us would do, he soldiered on,” continued Mr. Coomes. But things went from bad to worse, so Mr. Milne radioed Sarnia Cost Guard on channel 16. They asked for his position and he could not read the numbers on his radio as his eyesight was becoming hazy. He did manage to tell them he had left Clapperton and was heading for Little Current. When talking with him today Mr. Milne said that he should have pushed the distress button on his radio as it would have given them his position, but he did not want to bother them. A good lesson to learn—just do it.”

“From what I have been told and remember, the OPP boat and officers got me off the boat and to the hospital. Next I was airlifted to Sudbury hospital and was put on a CT scanner,” Mr. Milne told the Recorder.

Mr. Milne, in an email to Roy Eaton and the North Channel Cruisers’ Net, wrote, “I am the sailor that was rescued on July 20. I have been safely returned to my home in London Ontario yesterday, July 27. I would like to express my gratitude to all persons involved in getting me to the hospital and getting my sailboat safely into port.”

“With all the craziness going on in the world today, it is refreshing to see that there are so many caring and compassionate folks that have come to  my aid in my time of need. I am truly grateful to all involved,” continued Mr. Milne. “I would like to give a special thank you to all the first responders and the medical staff at Sudbury ICU where they put me on the road to recovery. In the next few weeks I will be organizing a few friends to assist me in returning my boat to Sarnia.”

Mr. Milne told the Recorder on Monday, “I went to the doctor today and am getting better. It really feels good to be on the right side of the grass. Yes, I can’t thank everyone who helped me out, enough. If anyone is ever in a situation like I was, they should know that they need to press the radio button—even if they don’t think they need to.”

“I try to get up to the Island and the North Channel every year. This was my fourth time up there. I have four more years of work then I will be retiring and I will be spending my summers on the Island. That’s the plan,” added Mr. Milne.