SHEGUIANDAH – This past Sunday was the last day in the kitchen for Wade and Barb Kearns as the sale of Green Acres Tent and Trailer Park and Restaurant in Sheguiandah has been finalized. The last several decades have been kind to the operation after the couple took over the popular park and restaurant on a whim in October of 1990.

“Impulse. We came up and just fell in love with the place,” said Ms. Kearns. “We basically bought it on a whim on April 1.”

The couple was operating a restaurant in Simcoe at the time and were looking to escape the 24/7 shackles a restaurant tends to place on its owners. “In all the years we ran the restaurant we really never had a day off,” said Mr. Kearns. When the couple purchased Green Acres it did not include a restaurant, although it did feature a general store of sorts.

“It’s funny,” said Ms. Kearns. “When we bought it was a time when there was a really big changeover in businesses on the Island and that seems to be what is happening now, with a lot of Island businesses changing hands.”

“We didn’t know what we were getting into,” laughed Ms. Kearns, ruefully recalling those first few months. “It was wintertime and everything was covered in snow when we saw it.”

One early visitor stepped out onto the porch and the floor gave way, dropping him a couple of feet down.

The couple soon discovered that the financials they had built their business plan upon were also somewhat less than solid—basically providing foundations more akin to quicksand than solid bedrock.

“My first clue was when the guy who delivered bread told me that my weekly order was for more than he usually brought in a month,” said Mr. Kearns.

It quickly became apparent that it would take more than the store and campgrounds to keep the wolves at bay. That provided the impetus for opening the restaurant—literally stepping out of the proverbial frying pan and into the fire.

There was another aspect of the park that took the couple off-guard.

“That first Haweater Weekend I had to call the cops 14 times,” recalled Mr. Kearns. Turns out the park was known as the place to party on the August long weekend.

“The second time the cops showed up they told us that the park had that reputation,” he said. “I told them that was going to change.” And it did.

“By the next Haweater Weekend I didn’t have to call the cops once,” recalled Mr. Kearns. His tight hand on the shenanigans may have proven a disappointment to the younger crowd that had grown used to wild and loud parties at night, but when it came to the bread and butter clients that make a park work, that stern oversight definitely paid off.

“It took three years,” said Ms. Kearns, “and I cried just about every day.”

“Years later I had one fellow come and ask to be let back into the park,” said Mr. Kearns. “He said that he was grown up now and had a family of his own and appreciated the rules. It was a place he wanted to be able to bring his wife and kids to in the summer.”

There are several stories from that first summer the couple owned the campground that are not fit for print in a family newspaper, but many of those stories centre on beachfront escapades that are far best left to the imagination.

While the growth to a sound and honest business foundation has largely been steady over the years since the couple took over, and the restaurant has acquired an enviable reputation for its solid and plentiful portions of great food (oh, and the fresh baked bread and pies), the campground and restaurant have witnessed many setbacks and challenges in getting there.

It took a number of years to live down the somewhat less than savoury reputation the park had garnered with the previous owner, but mother nature wasn’t always co-operative either.

A microburst several years ago immediately downed 170 trees in the campground, leaving Mr. Kearns literally staggered. “Not only did it take down those trees right away, but later I would be walking by a tree and the ground would bounce up and down beside a tree, just waiting to fall,” he recalled. “I had to take those ones down too. It was terrible.” The final tally topped 200.

But the experience of seeing dozens of friends, neighbours and complete strangers swarming over the park the next day wielding chainsaws, rakes and other tools was among the most uplifting experiences the couple has ever felt.

“I looked around me and realized that I didn’t even know who half those people were, but there they were hauling branches, piling wood, it was truly humbling,” said Mr. Kearns.

The restaurant was completely destroyed in a conflagration that thankfully spared the family home, but left the business in ruins.

Once again the community rallied behind the couple, holding a fundraising concert that astonished the couple and once again renewed their faith in Manitoulin.

Even though the park residents were the main organizers of the event, “I didn’t know half those guys played instruments,” laughed Mr. Kearns.

The Kearns are happy to be able to finally be able to retire; both have experienced severe health issues that have concerned many of those around them, but they both admit they will miss their Island family. “I turned 75 two days ago and I feel 175,” admitted Mr. Kearns.

The couple purchased a home in Simcoe two years ago when they first decided it was time to retire, but a number of would-be purchasers saw their offers on the Island business fall through. “It’s been quite a time,” admitted Ms. Kearns. But the children are probably more disappointed with the move than their parents.

“Most of our children and grandchildren have grown up here, most have worked here and they spend all their summers here,” said Mr. Kearns.

Asked if she is unhappy about leaving the heat of the kitchen behind, Ms. Kearns laughed. “Ten minutes from Lake Erie and it gets hotter than Hades in Simcoe, up to 140 degrees in the summer,” she laughed. “But there is this little thing called air conditioning,” rejoined her husband. “You just have to get from the car to the store to home.”

Although the couple’s departure is sad news for Manitoulin, the silver lining is that the new owners have committed to keeping the restaurant open.

“The one fellow who wants to buy it wasn’t going to, maybe operate a store or lease it out, but the folks who are buying it have said they will keep it open,” said Mr. Kearns.

Experienced? “Well, no, Jess and Jackie, they don’t have a lot of experience,” she chuckled. But the Kearns remain confident the new owners will set out in a much better position than they did when they first arrived.

The couple expressed their gratitude to the community for the years of support and assistance that it has provided them.

“We will miss the people,” said Ms. Kearns, “but it is time for younger people to take over.” 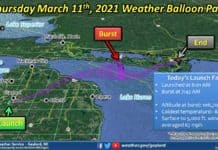