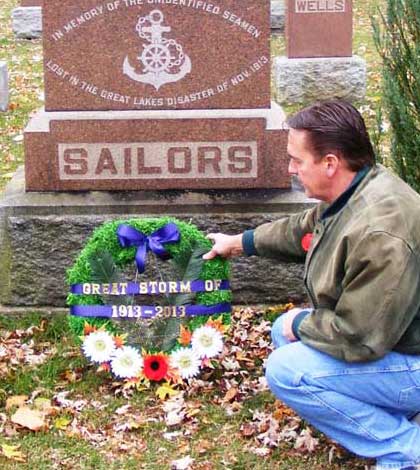 LAKE HURON—This Saturday, November 9 communities along the shores of Lake Huron will be remembering the over 250 drowned sailors, casualties in the long-forgotten Great Storm of 1913—the three-day-long storm that raged over all the Great Lakes, the worst of it over Lake Huron—marking the 100th anniversary of what has been called the worst maritime disaster on the Great Lakes.

The Expositor spoke with Captain David MacAdam, who spent some time in the Port of Little Current this summer. Mr. MacAdam is the proprietor of Mariner Solutions and the tugmaster who oversaw the North Channel trenching work when underwater cable was laid from the new transformer station at the end of Harbour View Road (to take on power from the McLean’s Mountain wind farm) to Goat Island.

Mr. MacAdam, along with Huron County historian Paul Carroll, is the mastermind behind the commemorative ceremonies that will take place this Saturday in Goderich, as well as the website www.1913storm.ca.

On that website, an excerpt from the final storm report of the Lake Carriers Association reads: “No Lake Master can recall in all his experience a storm of such unprecedented violence with such rapid changes in the direction of the wind and its gusts of such fearful speed! Storms ordinarily of that velocity do not last over 4 or 5 hours, but this storm raged for 16 hours continuously at an average velocity of 60 miles per hour, with frequent spurts of 70 and over…the waves were at least 35 feet high and followed each other in quick succession, three waves ordinarily coming one right after the other. They were considerably shorter than the waves that are formed by an ordinary gale. Being of such height and hurled with such force and rapid succession, the ships must have been subjected to incredible punishment.”

Mr. MacAdam explained that as a result of the Great Storm, 12 ships were lost at sea, with 19 total constructed losses, and 256 souls losing their lives. Of those lost ships, eight went down on Lake Huron, taking with them all hands.

It was three years ago, he said, that he and his brother Ian MacAdam, harbourmaster at Goderich, decided that something should be done to commemorate the 100th anniversary of this tragedy, and to enlighten the many who are not aware of the event while highlighting the rich marine heritage of the area.

“Our original idea was a shipping festival, but it’s grown into so much more,” he said.

The organizers have had buy-in all along the Huron Country as far south as Port Huron, with two sold out plays about the Great Storm on stage, offerings at area museums, weekly speakers leading up to the event, as well as a job fair with all the major players in Great Lakes shipping on board (the average age of a Great Lakes industry mariner is 54), including Algoma Central, Canada Steamships and McKeil Marine, to name a few.

Curious of Manitoulin’s role in the Great Storm, The Expositor contacted Little Current historian Sandy McGillivray, who recounted that local character, the late Captain Ev Ferguson, recounted coming home from school to see the Red Mill smokestack at Low Island topple over. The stack, Mr. McGillivray explained, would have been about 100 feet tall. He said that the ports of Little Current, Manitowaning and Fox Island all acted as shelter for commercial vessels during the three days.

A trip to the Little Current Public Library and The Expositor archives on microfilm there revealed that the storm did indeed make the news.

In the Thursday, November 13, 1913 edition, under the front page Local and Personal column, it is mentioned twice. “During the storm on Sunday the smoke stacks of the sawmills at Spanish Mills and Cutler were blown down.” And again, “Owing to the severe storm on Sunday, the mail boat was compelled to tie up at Fox Island for the night and arrived Monday forenoon at 11 am. She did not return to Cutler until Tuesday.”

“The hearts of Canadian people are beating in sympathy with the relatives of those who met a watery grave on the fatal 9th of November. While the Manitoulin has many sailors yet so far as known, she lost not one. She can not only be thankful, therefore, but send sympathy and help to those in distress,” the editor writes within that edition’s pages.

In the Thursday, November 20, 1913, the columnists also write about the Great Storm. In the Killarney column, the writer states: “The storm of Sunday night has beaten all record for years. Throughout the timber berths, there are thousands of pine and hemlock laying low. The storm of Sunday night has been considered a terror through the country but it is ill wind that don’t blow somebody good, when the storm brought to the home of Mr. and Mrs. Geo Pitfield a baby girl.”

The Sheguiandah columnist wrote, “One of the worst storms in the history of the Manitoulin occurred on the 9th. Our roads were blocked. The missionaries were the unfortunate ones having to keep their appointments.”

The Manitowaning News had the most interesting account of the storm. “Captain Hugh McKinnon of Tiverton Ont. is at this port waiting word from the R. Laidlow Lumber Co. of Sarnia Ont. as to getting a tug to tow his vessel to Sarnia. He anchored at Cape Smith in a gale of south wind and at 4 am Sunday, wind blowing with a squall from the north east couldn’t get under way, both anchors were let go and at 8 pm dragged anchors till her stern was striking in the breakers, seas breaking over her from end to end, she got water logged. Wind still increasing with snow all hopes were then given up to saving her. Crew of six, five men and one woman, were all on deck with sea sweeping over her. This kept up all through the night. At 9 am Monday morning the sea went down. They put all hands in the boat and got safe on shore at Wikwemikong. The crew consisted of Capt. Murdock McDonald, Goderich, mate; and sailors, Bob Gibson, Lions Head; Norman McLean, Southampton; John Johnston, Sarnia; Mrs. (Capt) Fitzgerald, Detroit, stewardess. All were stiff with wet and cold and their clothes were frozen when they got to Wikwemikong. The Captain got severely hurt from a heavy sea which struck him against the lumber but is now about alright again. The Captain says that he can never forget the kindness of the Indians that met them at the shore with a team and carried them to Gabriel Kitchikake’s store where they had a good dinner and a royal welcome.”

“The Schooner Sephie now laying at anchor with stern grounded at Cape Smith is filled with water but as yet cannot say as to extent of damage which is thought to be fairly heavy.”

“Capt. McKinnon is 67 years of age and has been sailing 44 years and says it was the worst storm that he ever encountered and was master of 30 years and never before had an accident of this kind,” the columnist continued. “All are thankful that the entire crew were saved and the schooner and cargo of lumber are not a total loss.” 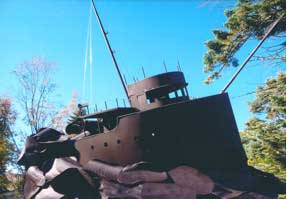 “Before leaving the wrecked schooner Mrs. Fitzgerald suggested that they have a little breakfast, so they gathered up some broken boards that were floating around and by pouring on coal oil were able to make a fire and boil a cup of coffee. The Captain says this, with bread that was floating around the cabin, made the best breakfast that he had ever eaten.”

“On Monday morning there were seven boats in shelter at Burn’s Dock here. Schooner Lyman Davis was tied to Stoddart’s dock loading lumber. All day Sunday she pounded up against the dock until the foundation of the dock gave way then it became necessary for the tug Maitland to tow her out to anchor in the Bay. Capt. Cook of Kincardine was in charge.”

“The wind on Sunday did considerable damage in the village and blew in the windows of McLaughlin and Cole’s store and D. Watson’s store and blew open the door of Mr. Reynold’s, store filling all three places with snow also blew the roofing off Burn’s ware-house.”

Back to the present, the ceremonies will begin this Friday with the unveiling of a monument to the lost souls of the Great Storm on the Goderich waterfront. A service at the Knox Presbyterian Church will replicate the very service given on November 16, 1913.

Goderich was a crucial community during the aftermath of the storm, acting as a makeshift morgue. Fifty-six bodies washed up on Lake Huron shores between the communities of Southampton and Port Franks.

“The existing breakwalls there (Goderich) today were in place, but no ship, not even today, would come in with conditions like that,” Mr. MacAdam said. “The winds were right out of the north at a constant 60 to 70 knots for 16 straight hours.”

This reporter sent The Expositor’s 1913 excerpts on to Mr. MacAdam and Mr. Carroll, who were excited to read Manitoulin’s take on the event.

“We have given credit to the ships that were totally lost, but have not paid much attention to the smaller ports,” Mr. Carroll admitted. “They are the stories that are getting lost, and it takes combing the local papers to find them.”

He noted that the stories from that time from the local Kincardine Times were all lost in a fire in 1934, burned by the publisher at the time in some kind of dispute.

Mr. Carroll, a published author on the Great Storm (also known, he explained, as Black Friday, the White Hurricane, and the Gale of November 9, depending on the part of the lake) will also be launching his latest book ‘Dear Ella,’ named after a postcard sent from New York to a man’s sweetheart in 1909. The front of the postcard included a photo of the SS Wexford locked in ice. The message read: ‘Dear Ella, This is the ship I am in. I hope it’s not like this in the fall.’ The Wexford was one of the ships lost with all hands near Goderich in the Great Storm.

‘Dear Ella’ is a collection of the victims’ families’ tales of those were lost in the storm. Those interested in purchasing a copy of the book can do so by mailing a $30 cheque ($25 plus $5 shipping) made out to GLS1913 to Great Lakes Storm of 1913, c/o the Centre for Employment and Learning, 41 West Street, Goderich, ON, N7A 2K5.

“The Great Storm is the worst maritime storm on the Great Lakes, yet it has never really found a home in our history books,” the retired schoolteacher said. “It never emerged as a great story in Canadian maritime history.”

He said he hopes the weekend events will serve as a reminder to all those who live on the Great Lakes the important role the waters play in their lives, and the lives of their forefathers. “If we didn’t have the lake as our front door, our communities would have never existed,” Mr. Carroll concluded.