NIAGARA FALLS—Manitoulin police officers were honoured at an awards gala this weekend in Niagara Falls hosted by the First Nations Chiefs of Police Association. One of them was named the Officer of the Year at the event.

Senior Constable Mack was also honoured with the police organziation’s Officer of the Year Award.

“As police chief, it is always comforting to know that Constable Mack was on duty,” said UCCM Chief of Police Rodney Nawegahbow. “His commitment and passion to get the job done meant that he always did so with objectivity, diligence and compassion.”

“Not only has Constable Mack been a dedicated officer when it comes to his investigative responsibility, but he has also been very proactive in our communities,” Police Chief Nahwegahbow continued. “I am aware that he has put time into dropping into the local schools for periodic visits with the youth. He has also been known for stopping in at the local elders’ residence that cares for our elderly and has been known for leaving treats behind for them. These are strengths and attributes that are the foundations of an outstanding officer and it gives me great pleasure to work with him and recognize him for his contributions.”

In a letter of support for Constable Mack’s nomination, Gilles Lachance, Ontario Provincial Police provincial liaison team leader, wrote in part, “Cst. Mack continuously demonstrates professionalism and leadership. He is always engaged with all the First Nation communities that he serves. When Dave is working, he is meeting or outreaching with key community contacts, stakeholders, community leadership and most important, community members and youth. Cst. Mack exemplifies the model of building meaningful relationships.”

“On several occasions, Mr. Mack has been involved with incidents that require police attention and has always treated students and staff with the utmost of respect,” writes Lakeview School Principal Neil Debassige. “He has demonstrated that perceptions of policing in the community last for many years and has shown that the organization is there for our protection and assistance.”

“On Saturday, August 15, 2015, Constable Jordan Atchison was off duty in the city of Toronto for a sporting event,” his nomination letter from Police Chief Nahwegahbow states. “It was mid-day and he was with friends in the vicinity of the Rogers Centre when he observed a lone Toronto Police Services officer engaged in a physical struggle with an emotionally disturbed man.”

“It was obvious that this officer needed assistance and Jordan acted swiftly and without regard for his own health and welfare by immediately stepping in and rendering assistance to this officer,” he continued.

“While I was wrestling with this man, Jordan, without a thought for his own health and welfare, immediately stepped in and assisted me in making the arrest,” writes Sgt. Martin Vandall, the officer Constable Atchison helped. “It was a busy street, lots of people around and he could have just as easily walked by. But he didn’t, much to my relief. He did not stick around for any more than a handshake and a thank you.”

Community Services Awards were also given to both Daughness Migwans, who holds the UCCMM social navigator position and Constable Murray Still. 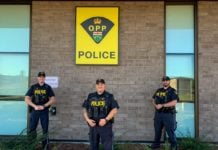