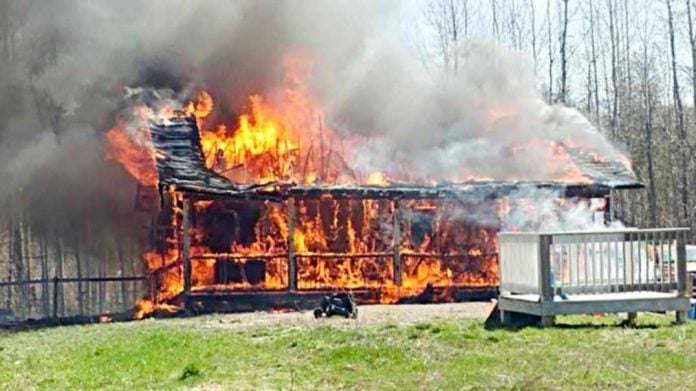 SHEGUIANDAH—Manitoulin has seen its fourth house fire in as many weeks as a fire tore through a Sheguiandah First Nation home last Wednesday afternoon, destroying the house belonging to a family of five.

The house belonged to Kim Waindubence and Dave Doucette and their three children, a 12-year-old boy, 11-year-old girl and a four-year-old girl. The family is in need of donations as they begin to piece their lives back together.

“At 3:43 pm we got a call for a fully involved structure fire on the Sheguiandah First Nation,” explained Darren Bailey, Northeast Town Fire Department fire chief. “We were on the scene 12 minutes later and the house was indeed fully involved.”

Mr. Bailey said it took his crews about two hours to extinguish the blaze.

“We were told on the scene that everyone was out of the home but the dog,” Mr. Bailey explained. Fire crews located the dog an hour-and-a-half later, alive, hiding in a closet. The dog was taken to a veterinarian but on the advice of the vet, the dog was euthanized due to smoke inhalation.

The United Chiefs and Councils of Manitoulin (UCCM) Anishinaabe Police Service enlisted the help of the Ontario Fire Marshal (OFM) to help determine the cause of the blaze.

Sgt. Brad Mack told The Expositor that the cause of the blaze is still under investigation and that it will likely be two to three weeks before the UCCM Police receive the results from the OFM.

“We are looking to interview a number of people and are asking for any information from the public,” Sgt. Mack said.

Family member Nicole Waindubence is spearheading a collection for the Waindubence-Doucette family that includes clothes, household items and monetary donations with items to be dropped off at the Sheguiandah First Nation Elders’ Centre, 11108A Highway 6, across from the Manitoulin Trading Post.

A GoFundMe account has also been created for the family by Terri Lynn Waindubence and can be accessed at www.gofundme.com/m9js86-fire-loss.