SHEGUIANDAH—Sheguiandah celebrated its 25th annual jiingtamok ( powwow ) this past weekend with a large crowd and numerous dancers.

Masters of Ceremonies Dan Fox and Chris Pheasant kept the event on schedule and the crowd entertained throughout the weekend, while arena director Chop Waindubence kept the dancers organized.

There were several drum groups rotating, keeping the heartbeat of the powwow alive including Young Biisine, Spirit Bear, High Eagle and Sitting Bear. 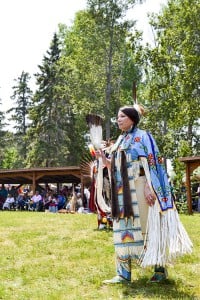 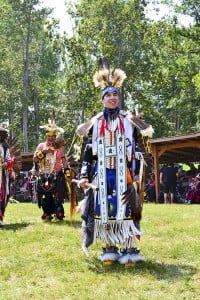 “I was very honoured to be asked,” said Ms. Madahbee Leach. “Twenty-five years ago, many communities on the Island were working towards restarting their powwows. All the communities really worked together, supporting one another and sharing best practices. It is nice to see that that the partnerships are still ongoing.” 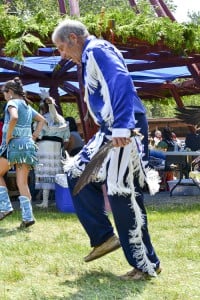 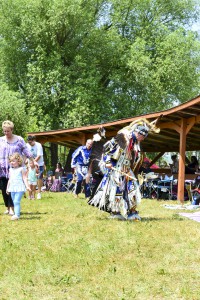 “I had a lot of fun,” Ms. Madahbee Leach continued. “The first powwow was such a big celebration and I admired the good work of the organizing committee, especially Gabriel and Clara Waindubence and their son Gordon who started clearing the grounds for the powwow grounds over 25 years ago.”

The women’s traditional dancer said that she looks forward to the Sheguiandah Powwow each year.

“It is one of the largest in the region and the organizers build a lot of fun elements into it that really create a positive atmosphere,”  added Ms. Madahbee. “It is close to the July long weekend and the start of the tourist season here on Manitoulin which always draws in a lot of dancers and a big crowd. They always add something new every year that makes it a lot of fun too.”

“It was a really awesome powwow,” said Sheguiandah Deputy Chief Georgina Thompson. “The family that runs it (the Waindubence family) wanted to still have it because they knew that’s what Richard (Shawanda, the community’s recently deceased chief) would have wanted. There was an honour dance held for him with family and friends, which was very nice.”

“The arena was full and there were a lot of dancers,” continued Ms. Thompson. “Twenty-five years is a milestone for the community and a celebration for all the years of hard work.”