Ms. Cheechoo, of M’Chigeeng First Nation (originally from James Bay, Quebec), was among 38 other recipients invested into the Order of Canada during a ceremony  at Rideau Hall this past Wednesday.

“Filmmaker, actor and visual artist Shirley Cheechoo is, above all, a gifted storyteller,” remarks made by a representative of the Governor General of Canada office read. “Throughout her multi-faceted career she has drawn on her First Nations heritage and used art to explore themes of trauma, healing and identity. A revered mentor in Indigenous arts communities, she has promoted creative opportunities for fellow artists as the founder of both the Debajehmujig Theatre Company and the Weengushk Film Institute. As the first Indigenous person and woman to serve as chancellor of Brock University, she has shared her leadership and wisdom with new audiences.”

Ms. Cheechoo had been notified on Boxing Day, December 26, 2018, of the Order of Canada citation.

Editor’s Note: See additional coverage in a future edition of the Recorder. 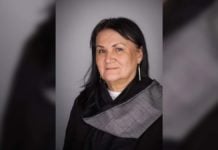