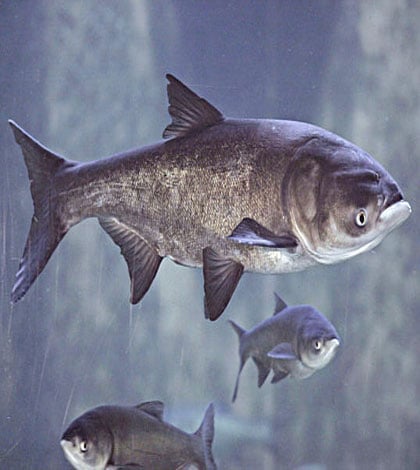 ONTARIO––Plans announced by the Asian Carp Regional Coordinating Committee (ACRCC) as a new plan of attack to stem Asian carp from reaching the Great Lakes are being panned by the chair of the Great Lakes section of the Sierra Club Ontario.

“Marc Gaden is a good person and he and the Great Lakes Fishery Commission think they (ACRCC) are doing everything they can to keep Asian carp out of the Great Lakes, but they are not talking at all about separating the Chicago basin from the other water body, which is what is needed to make sure they are not going any further,” stated Mary Muter in an interview last week. “Instead, the commission is spending millions of dollars to monitor Asian carp when, for a fraction of the cost, they could separate the Chicago waterway by building a mobile moving marine railway, and it would prevent Asian carp from getting through,” stated Ms. Muter.

Mr. Gaden told Michigan Radio on May 2, 2016 that the Great Lakes Fishery Commission has put together a three-pronged approach to tackling the Asian carp problem. “It’s monitoring, so eyes and ears and boots on the ground to know where these fish are. It’s management; ongoing activities to keep these fish from moving around, to limit their reproduction. And then, contingency planning; based on that monitoring, if the Asian carp are found somewhere where they shouldn’t be, we have  a contingency plan, or specific actions we can take to deal with the problem.”

Mr. Gaden told Michigan Radio the agencies made up a collation of federal and state agencies working to keep Asian carp out of the Great Lakes are going to double the fishing effort in the Dresden Island pool, in Illinois, which is the location of the leading edge of Asian carp.

“So we’re going to have much more commercial fishing to remove (the carp) and already we’ve removed tons and tons. We’re going to significantly increase our monitoring in 2016 through the Chicago Area Waterway System and in the rivers in Illinois,” Mr. Gaden told Michigan Radio.

Mr. Gaden said the contingency plan is brand new because what it does is outline what exactly you can do if these fish are found where they shouldn’t be. It commits the agencies who are part of the response to take that action.

Mr. Gaden noted the adult population of Asian carp is about 50 miles from Lake Michigan, with a system of locks and barriers in between.

However, a new US federal study found that small fish can be trapped between barges and get through locks and electric barriers. Mr. Gaden agreed it’s possible the same thing could happen with little carp.

He told Michigan Radio, “we’re very concerned that small Asian carp could be caught in the shadow of a barge; they call that entrapment, and moved beyond the electrical barrier, from below the barrier to above the barrier. It’s very real. The studies have shown these carp can get in an eddy or protected zone, and moved past the barrier. There are studies going on now about how that can be stopped.”

“Having a mobile marine railway in place would mean that shipping would have to be delayed for 15 minutes in Chicago,” said Ms. Muter. “What they are going to do makes no sense at all. It just demonstrates the lobby power barge operations have on the government. It’s sad, and the costs with having a marine railway in place compared to the cost of having Asian carp into the Great Lakes is small.”

“We should all be concerned about this issue and the lack of action being taken,” said Ms. Muter. “And Canada needs to take a much more aggressive position on all of this. They say Asian carp are only 50 miles from Lake Michigan, so they just keep getting closer and closer. I want to see a headline that says they are going to build a mobile marine railway and separate the two waterways. Canada needs to call on the US government to put this mobile marine railway in place at the Chicago sanitary canal. We can only hope our federal government is strong enough to make that type of request.”

“If Asian carp make it into the Great Lakes many people worry they could cause billions of dollars in damag,” she continued. The large fish are voracious feeders that can out-compete native species. Silver carp tend to jump when startled, which can injure people and damage boats.

Mr. Gaden says the total spent on Asian carp, by all agencies, is about $57 million per year. More than half of that is for the electrical barrier system.

Meanwhile, the Associated Press reported on June 2, 2016 that scientists say that one type of invasive Asian carp is spawning in a Great Lakes tributary. A graduate student at the University of Toledo in Ohio discovered grass carp eggs last summer in the Sandusky River, which flows into Lake Erie.