LITTLE CURRENT – A solid contingent of fans, family members and friends came out to support Skate Canada Manitoulin’s young athletes at its year-end ice show called ‘The Year of the Dragon,’ held recently at the Little Current-Howland Recreation Centre in Little Current, which saw the young skaters showing off their newfound and growing skills during an entertaining story about a stolen dragon’s egg written by the organizer.

“The skaters did very well; it was a lot of fun,” said organizer and skate coach Abbie Drolet. “The kids had a lot of fun, they loved their costumes, got to skate with their friends and show off their skills.”

Dozens of young skaters took to the ice for the evening’s program which opened with a darkened arena and laser lights setting the mood for the story to follow. Under a shroud of fog, the fire dragon, portrayed by Nikki Boyle, skated in from the north entrance and performed a short solo routine.

Next out was Jasmine Clark as the ice dragon as the lighting effects did their best recreation of the northern lights. The final solo dragon to appear was the forest dragon, Shaylee Taylor, followed by a routine when the golden egg arrived in the arena, lowered from the ceiling onto a protective bed under the watch of the egg guardians of CanSkate’s green group (David Cooper, Harmony Pitawanakwat, John McLean, Lourdes Taukei, Maria Ense-Cheechoo, Michael Taukei, Nova Debassige, Nyala O’Connor, Safiyah Esquimaux, Taidym Gonawabi and Taiya Gonawabi).

In the next scene, though, the egg was left unguarded and four fairies (Brooklynn Ferguson, Kirsten Bowerman, Morgan Dedman and Violet Sutherland) come and steal it away. The three dragons then arrived and found the egg to be stolen. The red fairy and a team of helpful phoenixes (portrayed by Matilda Mishibinijima, Hailee Harasym, Jaydyn Pegelo and Sadie Eadie) looked for a place to hide the egg and guard it out of sight of the dragons.

The blue fairy appeared with mermaids Ava Mandigo, Maria Loucks and Kamia Bowerman and they performed an intricate ribbon routine. As they left the ice, an excited parent who had previewed the schedule called out “bring on the penguins!”

They steadily traversed the ice as they searched high and low, with the ice dragon helping to get the penguins back on their feet if they ever should falter.

The purple fairy, though, had the strongest conscience of her team and decided the egg should be returned to its rightful owners. However, during that time it had taken on a multi-coloured appearance from its previous golden look. Before they can disappear, though, the dragons return and catch the fairies in the act of returning the stolen egg.

Before the dragons can figure out their revenge, the egg began to wiggle and out of it hatched the promised golden dragon (Ogeequa Williston Osawabine).

Then, it was a party before the big finale when all skaters came out onto the ice to the sound of loud cheers from the audience.

Spectators leaving the audience could be heard describing it as the best show they had seen in years. Ms. Drolet said she was pleased with the result.

“I’ve only heard positive feedback so far. We appreciate the hard work of all the volunteers to put in the work to get the show together,” she said, noting that 20 people helped out with this year’s production. Nicole Taylor served as narrator for the show. 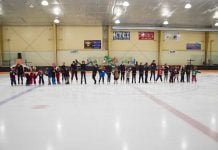 Skate Canada Manitoulin getting off to a strong, if somewhat late, start to 2022 season 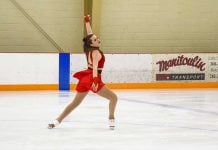 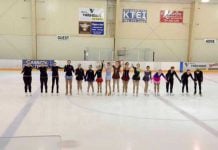 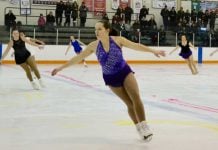