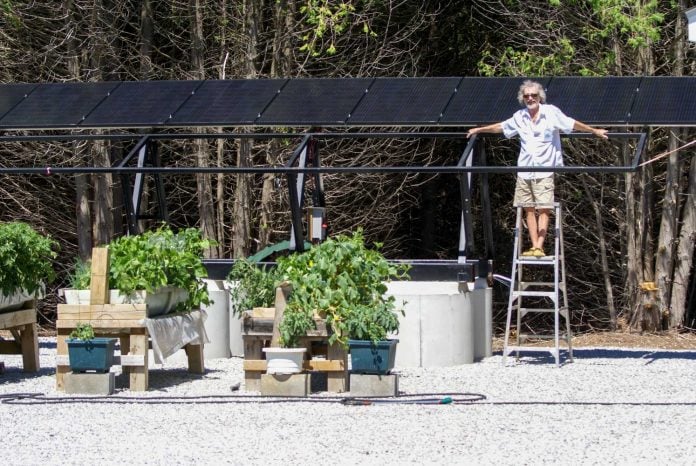 TEHKUMMAH – André Probst has been living with solar for over 20 years. When he got started, cost was the limiting factor with the outlay for solar panels in the thousands of dollars. A lot has changed over the past two decades and solar is definitely worth consideration now, he says. “It’s totally doable and makes sense for somebody who’s looking for long-term solutions, 20 years ahead. The cost of hydro is not going to come down and keeps going up and up.”

While the cost of panels continues to decrease, the price of other components are always edging up a little due to manufacturing issues or cost of parts and labour. Battery prices have been stable. “The only thing that’s really coming down in price is that panels themselves,” he said. “You can add more panels which in turn grab more sunlight but then you have to have a charge controller that can handle the power.”

Mr. Probst owns Manitoulin Off-Grid Systems, located on Government Road between Mindemoya and Michael’s Bay. Interest in residential solar power is strong, so much so that whether you want to build new or switch to off-grid you might be looking at next year for installation.

He receives a lot of calls for parts pricing or technical questions. He can help hook up a system that he hasn’t designed or supplied the parts for but he can’t guarantee how long the parts will work, or even if they will. “When someone buys parts frugally through Amazon or similar the quality of the equipment can’t be guaranteed,” he said. “The components might not work together. They might not be the right components or sizes, and they may not last as long.”

Mr. Probst said he installs systems that will last 20 years or more and come with guaranteed technical support and troubleshooting. He prefers to use parts manufactured in Canada or North America. “I know it works and it’s reliable.” His suppliers have good technical support teams in place that will either walk him through a problem or will replace the equipment if that’s the issue. “I try to steer people toward the stuff that I know works from my own experience.”

A typical system with nine solar panels and eight or nine batteries will provide four or five kwh energy a day. “City people are used to using more than that,” he said. Some people use more than 20 kwh a day with baseboard heating, air conditioning, an electric oven, dishwasher, clothes dryer and televisions in every room. They may need to wean themselves away from that, he suggested. It would be a significant cost difference: $50,000 for a 20 kwh system versus $20,000 for a five kwh system. Every system is unique.

It takes about a day to design a system once he knows what the expected loads are. Once the system and quote are approved it would be another week or two for all the parts to come in. With COVID-19 it has been a little longer, sometimes three or four weeks. A typical system will only take two days to install.

Once a system is installed the only additional cost is battery replacement. The average life is about 10 to 12 years for an AGM type if you don’t discharge them too deeply, he said, and a well maintained flooded battery can last up to 25 years. Solar panels themselves will last 20 years.

Mr. Probst installed what he calls a typical system for Kevin and Ginger Cranston about three years ago and they have nothing but praise. Their system consists of nine solar panels and eight batteries with a charge controller and inverter. It puts out 120/240 and powers both sides of the electrical panel. “I check it every morning,” said Mr. Cranston. “It’s working really well. We have electric hot water even. The biggest draw is probably our washing machine. Our fridge is a regular fridge built by Moffat. We bought it at Jake’s.”

Many Moffat appliances are designed to use pure sine wave energy now and work well with solar power, he said. “Your motors run smoother, your clocks keep better time and they’re energy efficient. When it’s running our refrigerator barely shows on the meter, only 0.8 amps. In a home powered by hydroelectricity, that would be 1.2 amps.”

At any given time, there could be kids playing games in the trailer outside with the lights on and the adults in the house watching movies, he said. “The fridge comes on, the freezer. We don’t lose any draw. I’m always getting phone calls or text messages from friends asking if my hydro is out. We get that all the time. We don’t even know when the power goes out.”

You can supplement with wind but it’s not reliable, said Mr. Cranston. It also may not be necessary. “Yesterday it was pouring rain. It was cloudy and raining and the system was still charging.” In the winter it continues to charge even when covered with a few inches of snow. “You can just use a roof rake to clear the panels. The panels won’t break. Usually once the sun comes up the panels warm up enough to melt the snow.”

“I’ll have to change the batteries maybe 10 years from now but technology is advancing and prices for (AGM) batteries are starting to come down because they’re becoming more popular,” he said. He highly recommends going solar, especially for new builds on the Island. “We’ve never had a problem, never had to shut it down. The generator has kicked in only a few times over the three years it’s been in place.”

Renewables are where it’s at, Mr. Probst said. “The environmental benefits are one thing. Every bit of reducing our greenhouse gas is going to help. More sun will give us more energy producing days and in that way, it makes more sense to go solar.”

The other thing, he said, is there are a lot of properties on the Island that are too far from the grid and it’s often not practical to connect. “It really makes a lot of sense to compare the cost of running hydro poles and lines to the cost of an off-grid system. An off-grid system can be designed and built to be very reliable and lasts many years and will actually be cost effective.”

Right now, he has two or three serious inquiries from people who want off the grid. “Hydro One just bumped everyone’s rates up 50 percent last fall and distribution is very costly to rural areas. Last November they bumped up delivery charges to $60 per month. That’s when you have to look at it and wonder if it makes sense. Switching to solar is really a win-win. It’s making more and more sense as the price of panels goes down and the cost of electricity goes up.”

Someone who is frugal with their hydro usage can still be paying $800 per year just to be connected, he said. “Spread that over 20 years and you can just about buy yourself a system and use as much hydro as you want.”