SAULT STE. MARIE – The Norgoma, sister ship to the Norisle berthed at Manitowaning, has been sold to interests in Tobermory, where plans to turn it into a quayside restaurant and tourist attraction are in the nascent stage.

The Norisle was at one time destined to also travel to Tobermory, where plans were to sink the historic vessel to create a new diving destination. The Norgoma, should plans go to fruition, will remain afloat with a new lease on life.

Mike Goman, co-owner of Tobermory’s The Coffee Shop, said the idea to bring the Norgoma to the tip of the peninsula came out when he and his partner Dr. George Harpur wanted to expand that business while at the same time preserving a significant part of Georgian Bay history.

“The captain’s quarters and the first and second mate’s quarters and the bridge and wheelhouse are in good shape and kids don’t get an opportunity to see that kind of thing anymore,” Mr. Goman told the Owen Sound Times. “I think it would be really cool to be able to open it up and let people go on it and see it.”

Other plans include enlisting volunteers to talk about the history of the ship and the role it played in the early transportation grid for a significant portion of Northern Ontario.

Built in the 1950s in Collingwood, the 188-foot Norgoma began life as a package freighter and passenger ferry operated by the Owen Sound Transportation Company. The ship spent 13 years servicing the “Turkey Trail” between Owen Sound and Sault Ste. Marie.

Improvements to Ontario’s highways made the route redundant, so in 1964 the Norgoma joined the Manitoulin ferry run along with the Norisle. In 1974 both ships were replaced by the Chi-Cheemaun, which still does the run today.

The City of Sault Ste. Marie bought the Norgoma for a dollar from the Ontario government in 1975 and the Norgoma was operated there as a museum. The ship received significant subsidies from the city, but a couple of years ago the municipality finally pulled the plug on what had become somewhat of a perennial request for “last time” donations. Last year, the city took ownership of the ship and it was moved from the city’s Roberta Bondar Marina to the Purvis docks near Algoma Steel in June 2019—going up for sale shortly after.

Both the Norgoma and the Norisle have proven controversial investments by the municipalities who hoped the vessels would entice tourism in their communities, but the cost of maintaining and refitting the vessels has proven beyond their reach. The Norisle was slated to move to Tobermory a couple of years ago to become a dive location, but the new council put those plans back on hold following an expensive court challenge and settlement. 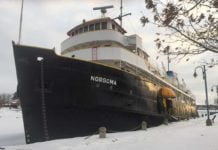 New owner of M.S. Norgoma has no definite plans for ship