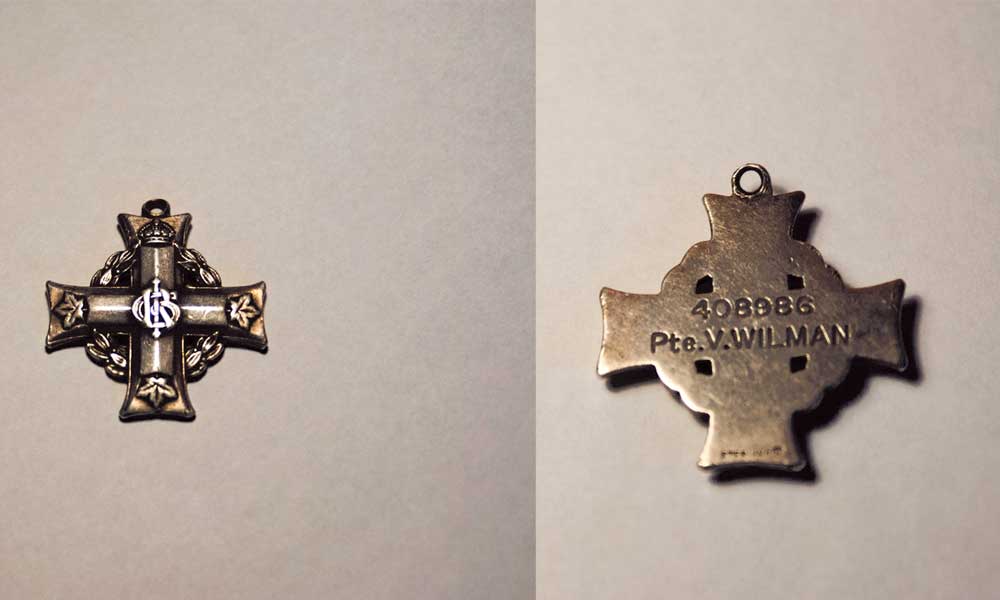 Valentine Wilman’s WWI Memorial Cross was up for sale

SOUTH BAYMOUTH—In October 2012, Dave Thomson notified this newspaper and the Little Schoolhouse and Museum in South Baymouth of a WWI military medal that was listed for sale on eBay. Thanks to generous donations from Islanders enough funds were raised to purchase the Medal for Bravery in the Field belonging to First World War veteran Henry Boyd Chisholm, who was born in South Baymouth. Last week the museum was able to bring home another WWI medal, a Memorial Cross for Valentine Christopher Wilman, also from South Baymouth.

Mr. Thomson, who resides in St. George in southwestern Ontario, is interested in Canadian history. He likes to search for Canadian military medals online, notifying the family or local museum so they can repatriate the medal. When he found the Wilman medal he notified Jane Deyell, former chair of the museum. “This cross,” he wrote to Mrs. Deyell, “commonly called the ‘Mothers Silver Cross’ would have been given to his mother Elizabeth Wilman. You will probably find over the years after WWI Elizabeth Wilman was likely the Silver Cross Mother for your area on one or more Remembrance Days.”

Mrs. Deyell took immediate action by notifying the current board, Reeve Eric Russell and the municipal office. “You’ll remember Dave as the man who got us our Chisholm medal,” she stated. “This one is the Memorial Cross…I think it is an important find and hope the municipality/museum can act on it immediately.”

Act they did. Within 10 days the medal was in Tehkummah.

Private Wilman was born May 18, 1892 in South Baymouth to parents Valentine and Elizabeth (nee Bennett). According to his obituary published in The Recorder in 1923, Mr. Wilman Sr. was “one of the earliest pioneers on the south side of the Island, having come with his grandparents who were of United Empire Loyalist stock from Pennsylvania, from Quebec in 1873 to Walker’s Point on the south shore of the Island where his uncles Christopher and Peter had already established a trading post. They had another at Gore Bay, being among the first white settlers there. Old residents will remember the loss of the “Sea Horse” when both Mr. Wilman’s uncles were drowned, also Mr. Love, Mr. Turly and another. They were on their way to Sarnia with their fish. Shortly after this Mr. Wilman moved to South Bay Mouth where he resided until his death.”

The younger Valentine Wilman enlisted to serve in the Canadian Overseas Expeditionary Force in October 1915 when he was 23-years-old. He served in the 37th Battalion, Canadian Infantry for only a short time. He died April 2, 1916 at Isolation Hospital, Folkestone. The cause of death was measles and pneumonia. Private Wilman is buried at Shorncliffe Military Cemetery.

The Little Schoolhouse and Museum will feature the Wilman and Chisholm medals in its military exhibit for the upcoming 2015 season.

Veterans and their families to remember the battle for Vimy Ridge