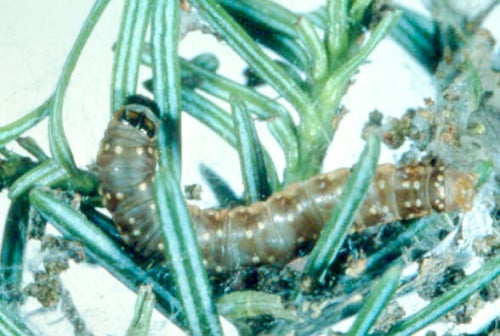 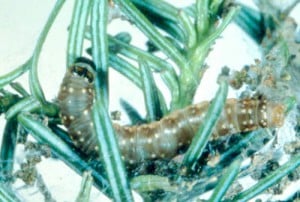 MANITOULIN––The assault on Manitoulin forest stands is intensifying. Following on the heels of reports that the emerald ash borer has been found in Sheguiandah, recent findings released by Bioforest Technologies Inc. indicate that a widespread outbreak of the eastern spruce budworm is currently underway in various locations across Manitoulin.

“It’s scattered here and there across the Island,” said BioForest Technologies operations manager Paul Bolan. “We can say with confidence that it has reached outbreak status.”

The spruce budworm is always with us, explained Mr. Bolan. Unlike the emerald ash borer, the spruce budworm is actually indigenous to this region. The creatures are usually not too much of a concern, but when stands of spruce and fir tree reach maturity, conditions ripen for an epidemic rise in the insect populations.

Unfortunately, recent economic conditions in the forestry industry have tended to provide just the right kind of breeding ground, as tree lot owners find the cost of culling mature trees by harvesting them really doesn’t have a good business case.

“There is very little money in it,” said Tom Cranston, whose Spring Bay-based Cranston Tree Services specializes in helping landowners cope with tree-related issues. “By the time you pay the cost of gas, labour, getting the wood out of the bush and loaded on to trucks and transporting it to the mill, you don’t get enough for it to make the effort worthwhile.”

The result is often that trees that are ideal for harvesting for their wood instead remain in the forest to provide ideal breeding grounds for insects like the spruce budworm.

“For the landowner it really is a difficult balancing act,” said Mr. Cranston. “If they have 100 trees in a stand, they have to make the decision on whether or not to take them out. What have you gained when you are only getting $300 to $400 per 1,000 board feet?”

Oddly, the spruce budworm prefers balsam fir trees over spruce trees. “Yes, you would almost think that they should be called the fir budworm,” said Mr. Bolan. “But the insects will attack spruce, white spruce as well as balsam fir. You don’t really find it as much in black spruce or larch trees.”

One thing is certain, however, the spruce budworm kills trees.

Travellers through the Rocky Mountain ranges have reported the intense devastation of millions of hectares of forest-whole mountainsides turned rusty brown as the trees succumb to the predation of the budworm’s western counterpart.

The spruce budworm, or Choristoneura fumiferana if you want to use its latin moniker, is described as one of the most destructive insects in the northern Canadian spruce and fir forests. Every three decades or so, since at least around the 1500s, the population of spruce budworms rises to epidemic proportions and the paleontologists tell us same thing has actually been happening for thousands of years.

The most susceptible forests tend to be those which contain mixtures of spruce and balsam fir.

When the numbers of spruce budworms are normal, the population is kept in check by natural predators, but when conditions or the cycle of the cosmos align to provide the right atmosphere for a rise to epidemic proportions, natural control mechanisms are overwhelmed.

That is when man steps in with his modern pharmecopia of solutions––literally. Chemical insecticides such as malathion, carbaryl, and acephate have been found to substantially reduce spruce budworm populations. But to be effective in large stands of timber, these have to be delivered through aerial spraying, and that method has not met with a good response from those living under the mist dropped from the air.

Green Party leader Elizabeth May first made her mark on the national scene with her battle against the aerial spraying in her native Cape Breton. While that spraying was of the herbicide best known as Agent Orange, environmental and health activists are quick to respond to any suggestion of aerial spraying of insecticides.

Microbial insecticides, such as the bacterium Bacillus thuringiensis, a naturally occurring, host-specific pathogen that affects only the larvae of lepidopterous insects is environmentally safe and a far more acceptable alternative.

“For large stands of trees, aerial spraying is the only way to deal with outbreaks,” asserted Mr. Bolan. The company he works for, BioForest Technologies Inc., was contracted to do research on the Manitoulin outbreaks by Valent Biosciences, a company which specializes in biological insecticides based on Bacillus thuringiensis.

“There is a 10-day window for the biological approach,” said Mr. Bolan. That 10-day window must hit the larval stage of the budworm, preferably before the insect manages to build itself a concoon-like shelter to hide from the pathogen.

For property owners interested in protecting individual trees, the services of a licensed pesticide applicator must be secured to tackle the problem on the ground, and The Expositor has not been successful in finding a local company with the required certifications.

“The problem is that it isn’t something that there is a consistant call for,” noted Mr. Bolan. “It gets even more complicated if it is a large tree. Then you have to get a boom truck in order to reach the top of the tree.” And of course there is the whole issue of getting the boom truck near to where the tree is located.

“I wish I had a definitive answer (for those wishing to protect a single tree or small stand),” said Mr. Bolan. “But what you don’t want is people out there spraying their trees with a household pesticide like Raid. It is dangerous and it doesn’t do any good. You would just be wasting your time.”

The Manitoulin study was conducted in cooperation with the Ministry of Natural Resources.

One of the complicating factors in attempting to deal with the Manitoulin outbreak is the lack of crown lands in the area.

“Whether you look at the lack of Crown land as a good thing or a bad thing, the fact is that almost all of the land on Manituolin is privately owned,” said Mr. Bolan. That limits government involvement in the solution. His company is currently looking for the owners of a significant sized parcel of land in the Providence Bay area that is suffering a significant outbreak in order to conduct a demonstration spraying of the biological control.