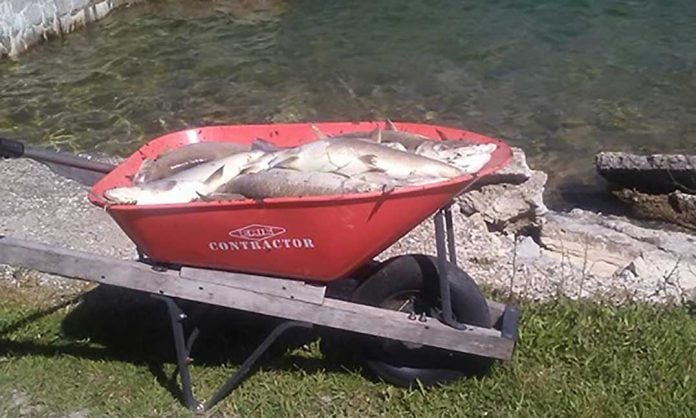 Rapid seasonal rise in water temperatures in inland lakes is the cause and is linked to global warming, biologists say

MANITOULIN—Recent mass fish die-offs in lakes Manitou and Mindemoya have caused considerable concern in area residents, with early indicators suggesting low oxygen and warm water might be the underlying cause; however, a new report states the problem will only worsen at a rapid rate in the future.

A letter in the journal Nature Climate Change published last week stated that, under a worst-case-scenario emissions model, the estimated number of reported fish die-offs in northern temperate lakes (such as Manitoulin’s inland lakes) will double by mid-century (2041-2059) and increase more than four-fold by the late 21st century (2081-2099).

“Temperature is fundamental to the study of ectotherms (cold-blooded creatures) because it impacts vital ecological rates, including reproduction, growth, susceptibility to disease and migratory ability,” the letter’s four authors—Aaron Till, Andrew L. Rypel, Andrew Bray and Samuel B. Fey—noted.

“These results expose a direct link between novel temperature regimes and the increased probability of catastrophic ecological events in freshwater ecosystems.”

The study examined a database of 502 reported freshwater fish die-offs in Wisconsin lakes alongside lake-specific water temperature models. It found that summerkill (fish die-off events caused by environmental conditions between June and September) was more commonly reported in lakes that experienced warmer temperatures during the summer, as well as lakes that underwent periods of unusually hot temperatures.

“Recent reports of singular high-magnitude population die-offs are often, in part or in full, attributed to the effects of climatic extremes,” the authors wrote.

They also noted that high surface temperatures are often coupled with longer, more intense lake stratification (lakes settling into three distinct temperature layers). These conditions can lead to a “temperature-oxygen squeeze” wherein suitable fish habitat shrinks because of high water temperatures in the top layer and low oxygen levels in the bottom layer.

Here on Manitoulin Island, reports of dead whitefish, perch, minnows, bass and a ling sparked concern among residents. Some Islanders took dead specimens to Manitoulin Streams Improvement Association and the Ontario Ministry of Natural Resources and Forestry (MNRF) for testing.

An MNRF statement issued after the first reports began to arrive indicated that die-offs occur from time to time and can be caused by low oxygen levels, spawning stress or changing water temperatures. The ministry has been working on testing the specimens.

Fisheries and Oceans Canada (DFO) research scientist Warren Currie agreed that this incident indicated stress-related death due to low oxygen and temperature changes. This was informed by the species involved in the die-offs.

“These species are particularly susceptible to drops in dissolved oxygen (large fishes need more oxygen) and within inland lakes, they can be trapped in embayments (bays) and can’t get out of the zone of low oxygen,” he told The Expositor.

Mr. Currie added that there have been reports of mixed-species fish kills in the Ottawa River this year which were impacted by high flows and spring runoff. He said this year’s cold winter and long spring may have caused a base-level of stress in fish stocks. There were also widespread fish kills in Australia this year during a record heatwave.

The higher precipitation from this past winter caused increased spring runoff, which can contribute to more silt and cloudiness in the water. A cool May and June rapidly gave way to a very hot July, leading to hotter water temperatures.

“The amount of oxygen that water can store is directly related to the temperature. Water at 4°C can only contain 13.1 mg per litre when saturated, but at 15°C the dissolved oxygen max is only 10.1 mg per litre (which is one-quarter less). In inland lakes such as Lake Manitou, the oxygen is also taken up as the sediments warm up and decomposers start to do their work,” said Mr. Currie.

“This is not the first time that this has happened,” said Mr. Mantha. “Hopefully the cause is something natural and simply a part of nature’s own plan for balance.”

The piece in Nature Climate Change stated that the likelihood of more reported fish die-offs is much higher in southern Wisconsin near the 43rd parallel of latitude, as opposed to the 46th parallel in the northern portion of the state.

Manitoulin Island resides between 45.5° north and 46° north, so based on the study data, the probability of reported fish die-offs is not likely to skyrocket immediately. However, as Earth continues to warm, that probability will grow with increasing speed.

“The anticipated increases in die-offs will probably accelerate the biological changes expected for north temperate lakes, both in terms of fish community composition and changes in traits of individual fish. For instance, increased summertime die-offs may facilitate warm-water species, such as largemouth bass, continuing to displace cool-water species, such as walleye,” the study noted.

Other conditions such as excessive phosphorus run-off after heavy winter precipitation (which contributes to harmful algal blooms and fish die-offs) are expected to increase in northern temperate lakes. Increased human population density near water bodies is also expected to boost the odds of reported summerkill; however, this data may be skewed because having more people present to report incidents will result in more reports when compared to remote lakes.

“It is possible that a global restructuring or depopulation of freshwater environments will ensue. Whether the observed relationship between extreme environmental conditions and animal die-offs is unique to aquatic ecosystems in this region remains a high-priority future research direction,” the writers stated in their conclusion.

Future predictions about fish die-offs were based on the Representative Concentration Pathway 8.5 worst-case emissions scenario, as the authors state this was the “only scenario available.” Other models do exist that showcase other possibilities for lesser pollution and, if these are taken into account, the likelihood of die-off events attributable to summerkill would decrease.