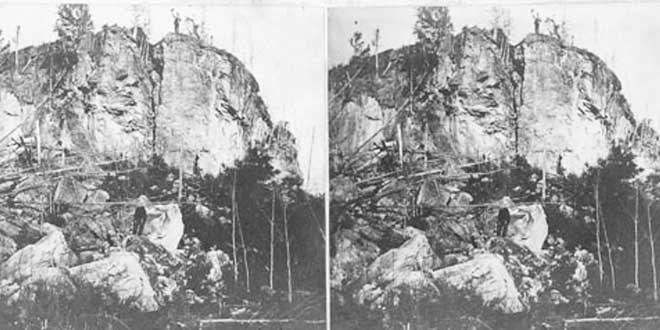 EDITOR’S NOTE: Shelley Pearen continues her series on the Manitoulin surveys. The January 15 and 22, 2014 editions of The Expositor carried her accounts of the first complete survey of Manitoulin. Today she describes the reaction of the Anishinaabe residents to the surveyors and provides an extract of the report on Assiginack Township.

Immediately following the signing of the Manitoulin treaty on October 6, 1862, William McDougall, the commissioner of Crown Lands who achieved the treaty, ordered an exploratory survey of the Island. A small team of surveyors explored the Island in November and December 1862. Their notes resulted in a promotional map of the Island that was released in January 1863.

Not surprisingly, the map showed future roads, good land, hardwood, burned land, swamps, thickets and seven tiny “Indian clearings.” It was clearly an attempt to illustrate the inaccurate premise that the Anishinaabe only utilized a tiny portion of the land while highlighting settlement potential.

Surveys of Assiginack, Bidwell, Billings, Howland, and Sheguiandah Townships were ordered by the department of Crown Lands in May 1863 but not carried out until much later that year.

When the surveyors returned to Manitoulin Island to carry out actual township surveys late in 1863 they were met by small deputations of Anishinaabe men who informed them that surveys were unwelcome and unnecessary. In the year since the treaty had been concluded Manitoulin’s Anishinaabe residents had met and discussed the future of their Island. The majority had agreed that the treaty was illegal and should be annulled.

On December 1, 1863 the Anishinaabe acted. They wrote a petition to the governor stating that the treaty was unlawful according to the Royal Proclamation of 1763. “We are, as we always believed ourselves to be, the proprietors of our lands not ceded, and which we possess as a nation. Now, no cession of the Island has been made to the Government in accordance with the conditions required by that proclamation.” Noting that they had already sent four petitions from all parts of the Island against the treaty they declared, “we do not consent to any work undertaken by the Government upon Manitoulin Island.” They said that they were sending letters to the surveyors asking them to stop work.

Letters of protest were delivered to all the surveyors, signed by residents of Wikwemikong, Adjidawaiganing (South Bay) and Michigiwadinong (M’Chigeeng). Surveyors John Grant, George McPhillips, Alex Niven and Jos. Hobson were visited and directed to stop surveying by 22 Anishinaabeg on January 9, 1864. The local superintendent for the Indian Department, Charles Dupont, convened the treaty and non-treaty people separately and persuaded them to stop protesting and to leave the matter in the hands of the government. Mr. Dupont informed his superiors that the treaty people had participated because of persuasion, deception and intimidation, the very claim the Anishinaabeg themselves made to explain their participation in the treaty.

Despite the protests, the surveys were conducted. The actual boundaries of the townships appear to have been drawn up by someone in Crown Lands between January 1863 and the summer of 1864, based on the 1863 exploratory survey information. Five surveys were conducted in 1863-64: Assiginack, Bidwell, Billings, Howland, and Sheguiandah.

Assiginack Township was surveyed by John Grant. He was not very impressed. “The portion not surveyed was omitted, on account of its total unfitness for cultivation; it being, as a general thing, a rough, broken, and rocky surface, covered with rolling boulders, interspersed with swamps and a few hardwood ridges; the eastern portion, being the larger part, swamp with cedar, balsam, tamarac, spruce and pine.”

“On the balance, up to portion surveyed on 11th Concession, small ridges of hardwood land, and the balance rock ad swamp. From the 12th Concession to the southwest angle of township, most of the land has been burnt over, little soil being left—it being left nearly a bare surface, covered with stone, except some swamp on the extreme south-west angle, and some high ridges of hardwood on South Bay. The portion between the 1st Concession and 11,12,13 and 14 is high and broken limestone rock, interspersed with mixed timber, principally cedar, balsam, birch and maple.”

Mr. Grant described the soil as principally a clay loam. In the east as far as the west side of Sucker Lake, 1 to 18 inch deep clay loam on limestone rock. The 1st and 2nd Concessions, a lighter clay loam, becoming sandier in the extreme west but, “considerably mixed up with stone, and many rolling boulders on the surface.” “That portion of the township on the south side of Manitou Lake, extending to the 11th Concession and west boundary, is a light clay loam, considerably broken up with ridges of rock, and large quantities of rolling stone mixed with it.” Additionally, he noted that “the parts of concession (from 11 to 14) surveyed, is very much broken up with rock, and with very little soil—a large portion entirely bare rock.”

Mr. Grant was also unimpressed by the waters. “A few streams of little importance, none of sufficient volume for mills purposes.” He noted he had not found any minerals, although he admitted that surveying in several feet of snow limited his research. Then described the concession and side roads as so broken up to be impracticable to open them as roads for travel.

He found “about 400 acres of clearing, in scattered patches” and described Manitowaning as containing 18 houses (four frame and the rest log), a church, mission house, school, and storehouse with a population of about 120.

Perhaps his most positive comment was: “There are some portions of the survey which offer fair inducements for settlement, probably one-third of the survey, the greatest portion being between Manitowaning and Sucker Lake, and around said lake, as far west as 19 on Concessions 1 and 2, and the balance in strips between the several ridges.”

It seems that Jako Atagiwinini’s description of Manitoulin to William McDougall during the treaty negotiations turned out to be fairly accurate. Mr. Jako described the Island as full of rocks, with many lakes and swamps, and lacking enough land for even ten of McDougall’s farmers.

In future columns, Ms. Pearen intends to provide Expositor readers with extracts of all the townships surveys, in alphabetical order by year of survey.

Shelley Pearen is the author of ‘Four Voices The Great Manitoulin Island Treaty of 1862’ and ‘Exploring Manitoulin.’ She has been researching Manitoulin history for more than 40 years.