Arrived in Canada three years ago with limited English

MINDEMOYA—Recent Manitoulin Secondary School (MSS) graduate Hadeel Alhadi is right at home when taking part in classic Manitoulin activities such as swimming and boating with her friends, but a significant distinction makes her especially unique—three years ago, she was living in Syria.

“It was a little bit scary at the beginning. Everything was new: the culture, the people and the language, but it got better once I got to know this place a little more,” said Ms. Alhadi.

It was in September of 2016 that Ms. Alhadi and her younger brother Kal immigrated to Canada from their home in Shahba, Syria. They had to make the voyage alone since they lost their parents in a car crash when Ms. Alhadi was just nine years old.

Fortunately, their uncle and his family live on Manitoulin Island and were able to sponsor their arrival. It took two years of filing paperwork and arranging all the required documents to allow them to arrive.

“(Syria) was in war, and still is. There’s not really a future there, so it was the right decision to move over to Canada,” said Ms. Alhadi.

They arrived in Ottawa and soon relocated to the Island. Ms. Alhadi had taken school-based English classes in Syria but, as many students who have gone through French classes in elementary and high school can attest, being able to apply language skills is often an entirely different challenge.

“When you’re new, everyone loves talking to you and I probably looked rude because I didn’t understand half of what they said, so I just smiled and nodded a lot,” said Ms. Alhadi with a laugh. “I was really worried about getting embarrassed when I tried to speak the language, but the teachers and students were super nice.”

Improving her English skills was a top priority once she arrived, to the extent that Ms. Alhadi studied a dictionary in great depth during her first year in Canada. Listening to songs and watching movies and TV shows was also a major help. It did not take long before she experienced first-hand just how important learning English would be for her future.

“I’ve always loved medicine and wanted to do something in health sciences. When I came here, I thought it was going to be impossible. My marks suffered in first year,” she said. “The hard part was understanding what the teacher was saying in lessons. I could at least look up the words that were probably going to be on tests and exams before.”

Her final average in Grade 10 was 75 percent—a respectable mark in its own right, especially given her circumstances, but nowhere near the requirements to make it into medical school.

“I’m not used to getting bad marks like in my first year, so I started working extra hard to make sure it didn’t happen again,” said Ms. Alhadi, adding that she did not get involved in extra-curricular activities or spend much time relaxing with friends because she was so focused on her goals.

That all changed remarkably fast, however, and her marks were soon on a steady upward track. In Grade 11, she got involved with the Share/Go Green club at MSS, grew her social circle through friends and a youth group and took up painting.

She spent a couple of weeks last summer volunteering at a health clinic in Mindemoya and also took a job in waitressing and housekeeping at a resort. One thing she had been missing from her life was writing, something which she had thoroughly enjoyed back in Syria. Her “amazing teacher” for Grade 12 English had an incredible impact on her and encouraged her to pick up a pen once more. She has taken up writing in her journal daily.

“My writing is inspired by the things that are hard to talk about. Writing has a great power to show people what you really feel and describe something in a beautiful way,” said Ms. Alhadi.

All of her hard work evidently paid off when she walked across the stage at her high school graduation last month, after having earned an incredible 97 percent average in Grade 12—the highest mark of the entire graduating class which also named her as an Ontario Scholar.

“I have a super supportive family so that was a huge part of it,” she said.

Ms. Alhadi’s dreams of a career in medicine are one step closer to reality. This summer, she is working at the resort once again and has moved into a paid position at the health clinic. She begins school at the University of Ottawa in September for biomedical sciences and said she wants to explore a few medical fields before deciding which one she will choose as a career.

“It’s going to be really exciting. I know my family will always be there for me and they can come visit and help out. They’ve done so much for me since I came here,” said Ms. Alhadi, adding that people on Manitoulin Island have been very welcoming and inclusive toward her.

“It is kind of terrifying to be in a new country with a new language and culture,” she said. “I came in an ideal situation, with family here. Some people have nothing.”

Ms. Alhadi acknowledged that a lot of immigrants do not have the same advantages she had and that some people are not as welcoming to newcomers.

“A lot of people feel like they don’t have a place here. In Canada specifically, immigrants make up a huge part of the country. You don’t know what people are going through, so give others a smile and say hi,” she said. “Even a smile can make a big difference.”

Although Ms. Alhadi will miss her family’s Syrian cooking when she moves to Ottawa to live independently, she could likely learn some of these recipes in no time. After all, for the person who mastered a new language and went on to graduate near the top of her class in a nation halfway around the world from home, it might seem that anything is possible. 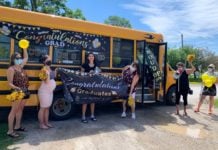