TEHKUMMAH – Volunteer members of Tehkummah’s newly re-formed recreation committee were hard at work Sunday as they travelled throughout the township to deliver physically distanced driveway visits to more than 50 households during their campaign to spread some joy for Valentine’s Day.

“(The recreation committee was) going through ideas of what to do, with COVID and the restrictions, and this is what we came up with to add a little bit of cheer to the community,” said committee member Lisa Lepage during the event.

Ms. Lepage served as the ‘Queen of Hearts’ in a nod to ‘Alice’s Adventures in Wonderland’ (though her interpretation was notably less bloodthirsty). She toured the township alongside Lorie Leeson, Janice Mitchell, Lori Gordon and Ginger Mead—fellow members of the recreation committee who formed ‘The Sister Act.’

They stayed physically apart from each other as they danced around and mimed the words to famous love songs (thanks to the sound system provided by Steve Fisher of Island Animal Hospital) and handed off small goodie bags to the homes they visited. The committee members created an extender basket to make the hand-offs and they hand-wrote greeting cards for the people who booked appointments and requested personal messages.

It has been nearly a year since the first widespread public health restrictions took hold in Ontario and that year has brought many challenges to people across the province. The hardships have particularly struck older people because they tend to be more susceptible to severe cases of COVID-19, and many are seeing fewer people in their daily lives as a result.

“Especially for seniors, but there’s been a lot of people that have been really frightened over the past year. Just seeing them happy, especially on Sunday for Valentine’s Day, was a big reward,” Ms. Mitchell told The Expositor the day after the event.

All of that was top-of-mind when the township’s recreation committee re-formed in late 2020 after several years of hiatus. Grassroots volunteers had locally run a similar campaign last spring with a clown visiting a few homes; when many of them joined the committee they felt doing a similar but larger event would help spread some of the same cheer.

“The smiles were so genuine; you could just feel people’s energy. They were just thrilled, even with people who you might not expect to be excited about something like this, they loved it,” said Ms. Mitchell.

The sign-up list totaled 49 households but the group made several more impromptu visits when they saw people walking about or decided to stop outside at an address unannounced. Some of those happened when they mistakenly walked up a neighbour’s driveway instead of their intended target.

Tammy Russell and Jeff St Pierre, who were among the list of recipients, said they were pleased to feel so much community warmth through this initiative.

“I think this is amazing for the community. It brings a lot of joy amid hard times. These guys are awesome,” Ms. Russell said.

Gifts flowed in both directions during the five-hour tour. A few homes knew they should be expecting a visit and traded off homemade cookies or packaged sweets to keep the volunteers’ spirits jovial.

Their matching outfits were former choir gowns from a church on the North Shore that Tehkummah resident Ruth Streicher gave toward the effort.

The group asked for $5 donations to help offset the costs of running the event and to help build the recreation committee’s coffers for its future plans, many of which are in the works. They are planning a driveway visit program for St. Patrick’s Day already.

Although they got a lot of interest, the group was not rushing to count their earnings.

“This is all about bringing joy and smiles to people. The money to do things in the future is just a secondary bonus,” Ms. Mitchell said. 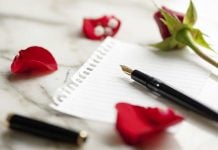