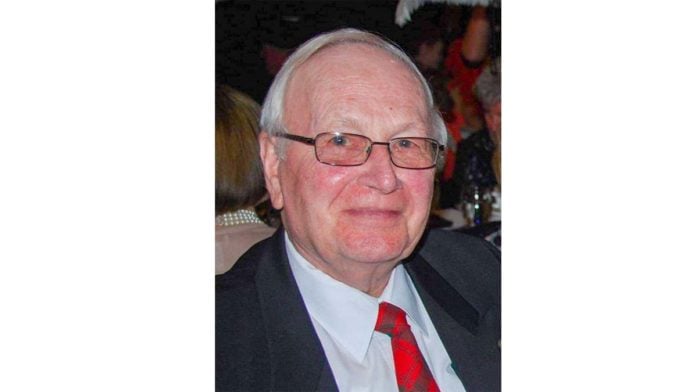 GORE BAY—Manitoulin Island icon and historian Willis John (Jack) McQuarrie of Gore Bay passed away peacefully with his family by his side on Tuesday March 1, in his 91st year. The tributes have come in waves from those who knew this man who contributed so much to Gore Bay and Western Manitoulin, indeed to all of Manitoulin Island.

“Yes, we were very close,” said former Gore Bay Mayor Ron Lane. “I originally got to know Jack because of my dad (the late John Lane) as they were very good friends even before dad was elected as member of the provincial parliament for the area.”

“I was really close to John and (his wife) Arlene through my work at the courthouse and socially,” said Sharon Sloss, who is the former court administrator in Gore Bay. Jack was the justice of the peace when I worked at the courthouse.”

“When John was the JP, I always felt he was very fair in his decisions,” said Ms. Sloss. “We were friends for a lot of years. Jack and Arlene were actually friends of my parents before I got to know them. Jack was a member of the Western Manitoulin Board of Trade, as was my dad.”

“Jack and I became quite good friends over the years,” said Darlene Hayden, who was a sitting JP at the courthouse (while Mr. McQuarrie was a non-presiding JP). “I loved his dry sense of humour. He was a gem.”

“We worked closely for a while. It was always nice to have him there, and he was always willing to help out,” said Ms. Hayden.

“It is very sad news hearing about Jack’s passing,” stated Ian Anderson, mayor of Billings Township and a former conservation officer with the Ministry of Natural Resources. “We’re all going to miss Jack.”

“I have so many good memories of him,” said Mayor Anderson. “And I had infinite respect for him. He was the editor and owner of The Recorder, justice of the peace and did a whole lot of other things in the community. And he had a really good sense of humour. I’m certainly going to miss him.”

“I always thought Jack and Arlene were the salt of the earth,” said Mayor Anderson.

“I had an awful lot to do with working with Jack early in my career as a conservation officer,” said Mayor Anderson. “He was the JP and he would sign the search warrants, and he was so accommodating to me.  I could call anytime, 24/7, even at 3 am and there was never any hesitation. Talk about being supportive and helpful for a new C.O.”

Doug Smith of Manitoulin Transport was a lifelong friend of John McQuarrie. “The story is, we had a gang of six of us, all under 10 years of age. Jack was one, along with Jack Gibbs, Louie Geiger, Tom Davis, Ken MacKenzie and myself. We were the ‘sandbox gang.’ There was a sandbox in my grandfathers’ back yard and we played there when we were young.”

“When we were old enough to move out of the sandbox, we played games as kids in the back field at home,” said Mr. Smith. “We have all been friends ever since.”

“John was a great guy,” said Mr. Smith. “I went into the trucking business, and he went to the into the newspaper business. We were lifelong friends.”

“I started with the local ambulance service in 1979. I looked after it but, fortunately, Jack was always behind me to help,” said Ms. Clarke. “He was a great guy, we were good friends all our lives.”

In 2015, on the occasion of the town of Gore Bay’s 125th anniversary celebrations, Jack McQuarrie, along with Doug Smith and the late John Lane were presented with the first Gore Bay lifetime achievement awards. (Mr. Lane’s award was presented posthumously and was accepted by his son Ron, at the time the mayor of the town, a position his father had once held.)

“To inaugurate this policy, and on the recommendation of the 125th anniversary committee, the council of the Town of Gore Bay, on behalf of its citizens has chosen to honour three gentlemen, who by a lifetime of effort have made a lasting and profound difference to their community,” said Ron Lane (mayor of Gore Bay in 2015) at the ceremony.

“John (McQuarrie), as his wife calls him or ‘Jack’ as he is known to myself and many others, was born and raised in Gore Bay. Jack had many adventures in his youth but fortunately for him, he was able to persuade a fair young lady from the Silver Water area to marry him in 1953 and following that he had someone to provide the strength and guidance he needed to carry out his future endeavours,” said Mr. Lane.

After a stint at the local bakeshop and McQuarrie Motors, “Jack McQuarrie ventured into the world of journalism when he acquired the Manitoulin Recorder newspaper,” continued Mr. Lane. “The Recorder was one of the oldest newspapers in Ontario with its roots going back to 1877. The first chore was to bring the operation of the historic Recorder into the 20th century operational mode. Following that, Jack moved on to enhance the commercial print shop and also a weekly newspaper for the Espanola area. Through the development of these businesses, it was always a family affair with everyone taking on their own responsibility and making their own contributions.”

Mr. Lane explained that it was through his work with the Recorder, “that Jack gained his respect of history and the fact that, with every edition of his newspaper, it was history in the making as his paper reported on current events of the day which, as the years passed, would become a permanent historical record.” said Mr. Lane. “These writings provided information and insight to help future generations to know and understand their origins and roots.”

“Jack, through his many years as the owner and operator of the Recorder, became the ‘historian’ of Gore Bay and the Manitoulin area. For Gore Bay’s Centennial year in 1990, he researched and wrote “The Early Years of Gore Bay” with its amazing pictures and detailed text.” In total, Mr. McQuarrie wrote over a dozen books. (The Early Years of Gore Bay, was updated by Mr. McQuarrie to celebrate the town’s 125th anniversary).

Mr. Lane further explained in 2015, “besides his contribution to providing us with a record of our history, Jack has participated in every aspect of his community from being a municipal councillor,  service club (Rotary) member, his church, the development  of our local ambulance service, as justice of the peace, the construction of the Gore Bay Medical Centre and a member or contributor to too many committees and projects to list.”

Ron Lane told The Expositor recently, “John was on council when dad was the mayor and he was his press secretary, local contact for all his press releases and signs when he was campaigning for the MPP’s seat for Algoma-Manitoulin. Dad had a campaign team for all his election campaigns, with Jack, Tom Riching and Bob Wright from Espanola. That’s how I first got to know Jack. And then later I joined the Rotary Club and was able to get to know Jack even better. He was one of the instrumental people in getting the Gore Bay Medical Centre built, and was the first chair of the new medical centre committee.”

“Jack was presented with the town’s lifetime achievement award, not just because of his success in business, but for giving so much back in the community,” said Mr. Lane. “Jack always wanted to make Gore Bay, and the West End of the Island, the best place it could be.”

“And on a more personal side, he was the ultimate family man,” continued Mr. Lane. “Arlene and their children were always first and foremost. And I can never recall seeing him without Arlene right there with him.”

“I got to know Jack even better when I found out his interest in boating,” said Mr. Lane. “He had a boat and he would take his family over to Cockburn Island, which I think was his sanctuary.” Mr. Lane’s wife Greta and their children visited the McQuarrie’s many times on Cockburn Island.

“Jack is going to be missed,” said Mr. Lane. “I’m going to miss him for all the fun times we had on Cockburn Island. And you could always count on Jack if you needed to discuss something; he was so knowledgeable about everything. And I appreciate all the time and effort he afforded for dad, and myself. He was a great friend.”

A memorial service will be held at a later date.