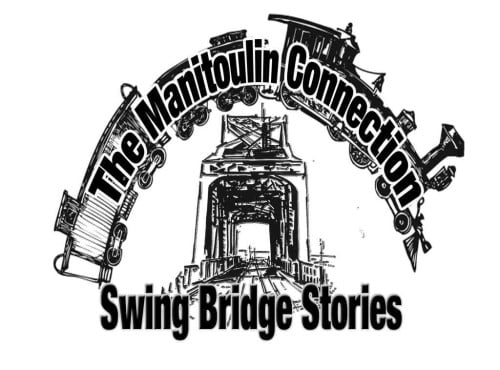 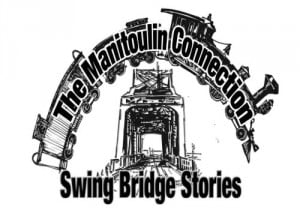 From the late decades of the 19th Century, Manitoulin people were longing for a land link to the North Shore. Several different parties held the charter to build the rail line but each in turn made promises but never performed.

Hopes were high at the turn of the 20th Century when the prominent industrialist, Francis H. Clerque’s syndicate held the charter. For numerous reasons the latter also failed to meet expectations.

It was thought at the time that the Manitoulin and North Shore Railroad would go across the Island and by ferry to the Bruce Peninsula. It was predicted that Little Current would become an industrial centre and property in town would increase in value.

Delays continued into the second half of the first decade but by then some real progress was being made by the company. A swing bridge was part of the plan for the new route. The builders received an extension of the 1911 deadline for completion of the line.

Besides being annoyed by the many delays, Manitoulin residents were disgruntled when it was revealed that the new railroad would be called The Algoma Eastern Railway with no hint of “Manitoulin” in the name. Fears were expressed that the line might terminate on Goat Island and not reach Manitoulin.

By January 1913 tracks were laid on Goat Island and a construction train was seen within a half mile of the Channel. Some freight and construction trains ran from Goat Island but it was not until later in the year that the Manitoulin Railroad or AER as it was known officially opened for business on October 1, 1913. Forty-two Little Current citizens were included among the passengers on the first trip from Goat Island. The group included Mayor Turner, Dr. John Carruthers, pharmacist Herman Currie, publisher J. Snowdon and many other leading businessmen. The train left Goat Island at 8:15 am and arrived in Sudbury at 12:15 pm.

Before the bridge was in place, a ferry conveyed passengers and freight across The North Channel.

With a land link to Sudbury, the focus of Islanders began to shift from the shipping lines ports of Collingwood and Owen Sound to the northern city just four hours away.

In the fall of 1911 surveyors for the railroad were taking soundings in order to estimate the cost and feasibility of constructing a bridge from Goat Island to Little Current. Although some feared no bridge would be built and Goat Island would become the terminus of the railroad, an official in the parent company announced in 1912 that the bridge would be started that summer.

An article in a railway magazine described the proposed bridge as a 372’ span swing girder with two clear channels 150’ wide and a centre pier over 30’ in diameter going down to the bedrock. Although the plan had been filed and approved by the appropriate government department, the possibility of substituting the swing span with a bascule lift span was still being discussed. At about the same time, the railroad purchased some park lots in an area on the Manitoulin side where bridge touched land.

The contract to build the cement piers was awarded to the Foundation Company of New York and Montreal with Mr. Charles Hillman acting as foreman. Materials were delayed; nevertheless work began in early October 1912 and machinery for construction arrived by boat later that month. The contract for constructing the bridge was reported a being in the neighbourhood of $300,000.

Mr. Hillman who was “…giving good wages,” expected to have 100 men at work all winter. Supplies kept arriving by boat and later by train that fall and winter. Mr. Norman Trotter obtained the contract to supply sand and gravel and his tug ‘Crowe’ for that purpose.

The construction site for the bridge included a storehouse for cement, machine and blacksmith shops and offices. Steam boilers provided power for a crusher, cement mixer and derrick. Steam was conducted in pipes to prevent sand and crushed rock from freezing. Cement was mixed by machine and run out on a track to a derrick scow which delivered it in large buckets.

The abutments on each side, two piers on the Goat Island side and one on the Manitoulin side as well as the large circular pier on which the bridge pivots were built over the winter of 1912/13. Cribs totaling 200’ in length were constructed to accommodate the bridge when open. In a terrific gale and blizzard on Good Friday, March 21, 1913, two of the wooden cribs were carried down to the Red Mill and into the ice near Picnic Island. One of the construction steam derricks was also wrecked. The same storm blew over the smokestack at the dynamo building at the Red Mill thus depriving the town of power for a considerable time. The town obtained electric power from the Red Mill at that time.

The centre pier, which was the last to be built, required 5,000 bags of cement. By early April it, and the cribs on which the steel superstructure was to be built, were nearly complete.

Later, in the month of May, some construction workers staged their own informal celebration. They marched down Robinson Street with the band, sailed in boats around the piers and finally went back to Wm. Astle’s, the blacksmith house, for ice cream.

Delays in securing material kept back construction of the steel work which was to be done by The Canadian Bridge Co. of Walkerville. Machinery for its erection including a large derrick and crane weighing 100 tons began arriving in July 1913.

By August work was progressing on building a “false works” on which the swing span would be constructed. The centre pivot was laid on September 2 with due formality. A copy of The Expositor and other papers were placed beneath it “…for some future generation to discover.” By late October four gangs of men using compressed air and red hot rivets were assembling the super-structure of the swing span.

Shortly after 9 am, Tuesday, November 18, amid the clamor from steam whistles from many sources, launch horns and at least one church bell. The swing span “…easily and gracefully swung off the trestle on which it was erected and moved round into position,” linking Goat Island and the North Shore with Manitoulin for the first time. Because not all the machinery was connected to swing it by the engine in the tower, the procedure was accomplished by manual effort. The original design incorporated a manual emergency method of swinging the bridge in the event of motor failure. It was possible for eight men to turn the bridge manually by revolving a capstan type device.

The Expositor, in a report that was copied by other newspapers around the country, described the new bridge as massive “…yet it has a very light, graceful and artistic appearance and reflects great credit on the designer, Mr. Boller of the firm of Boller, Hodge and Baird of New York.” Unfortunately the designer died the previous spring and was not present to see his handiwork.

The bridge was over 20 feet clear of the Channel. The top of the central tower reached almost 70 feet above the water. The district engineer and his wife and child were the first to cross the bridge. Mr. McGillis was the first Manitouliner to cross it. The first train went over it with construction supplies on November 24. The first passenger train crossed the bridge and arrived in town December 17, 1913.

In those days the bridge remained in its open position except when trains crossed in order not to interfere with navigation. The bridge operator would row out and swing the bridge for trains. Of course it remained in the closed position in winter after navigation ceased. It was owned at that time by the railway company, The Algoma Central Railway.