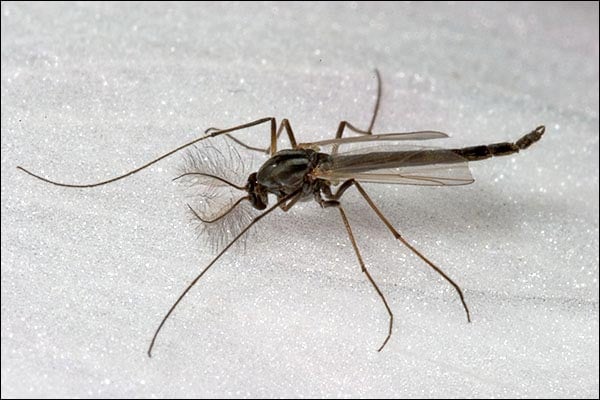 Editor’s Note: This article first appeared in 2015. In light of the current midge invasion, the Expositor shares this article by Dr Joe Shorthouse on all things midge.

Swarms of midges often contain millions of rapidly flying flies and they often accumulate at the heights of people throughout the Island from spring to fall. Often mistaken for mosquitoes, the adults of midges are harmless and the appearance of swarms is only temporary. Swarms found at the vineyard likely occur for only a few hours when the light and temperatures are just right in the fall.

Midges are small, delicate mosquito-sized flies with long legs and slender wings.  Males have large bushy antennae and are often referred to as “fussy bills.” They are of the insect family Chiromonidae and are commonly referred to as chironomid midges or ‘gnats.’ There are about are about 750 species in Canada. Unlike their mosquito relatives, adult midges do not have mouthparts, don’t feed, and therefore cannot bite people.

Midges are aquatic insects in the larval stage tolerant of a wide range of environmental conditions including slow moving streams, stagnant ditches, and ponds and lakes rich in decomposing organic matter. Larvae of most species of midges are highly desirable organisms in aquatic habitats where they are an important source of food for fish. Larvae ‘clean’ the aquatic environment by consuming and recycling organic debris. Adult midges are important sources of food for many species of birds.

There are four stages in the life cycle of midges: eggs, larvae, pupae and adults. Eggs are laid on the surface of the water then sink to the bottom and hatch within a week. Larvae of some species live on the surface of rocks at the bottom of lakes, while others burrow into the mud and construct small tubes in which they live. Organic matter suspended in the water is used as food for the developing larvae.

The larvae of some species turn pink and then a dark red giving them the name “blood worms” because of haemoglobin in their blood that allows the larvae to respire in areas of low oxygen.

The larval stage lasts from two to seven weeks depending on water temperature. They transform into pupae while still in their tubes, then after three to four days, the pupae swim to the surface and the adults emerge several hours later.

The entire life cycle in the summer from egg to adult can be completed in two to three weeks. However, in the fall, the larvae do not pupate and instead suspend their development and pass the winter as mature larvae. Pupation and emergence of adults occur the following spring in early May. Several more generations of midges are produced throughout the summer resulting in the mass emergence of adults.

Swarms of midges commonly appear on the Island in the early spring and can be annoying as you walk or ride bikes down roads, especially with your mouth open. Swarms are sometimes so thick they look like plumes of smoke from afar. Adults live for four to seven days so the mating dance is understandably frantic as all their energy is spent looking for mates rather than eating.

While the masses of midges may look like an unruly, enveloping gaggle, the clouds are actually organized mating dances where females come to find a mate. Most individuals in the giant mating swarms are males. Females come looking for these swarms and fly into the mass. Somehow, throughout all the chaos, the females select a male for mating.

Midges that appear in the fall, such as those found for a few hours on warm days, tend to congregate over markers such as stones in fields. In other words, both male and female midges are programmed to search for light-coloured stones about the size of dinner plates found in pastures.

Midges often swarm on people who are the tallest objects in flat landscapes making us sort-of lightening posts for insect mating. However, when you come across swarming midges and they decide to use the top of your head as a marker, try to get down low and blend into the background.