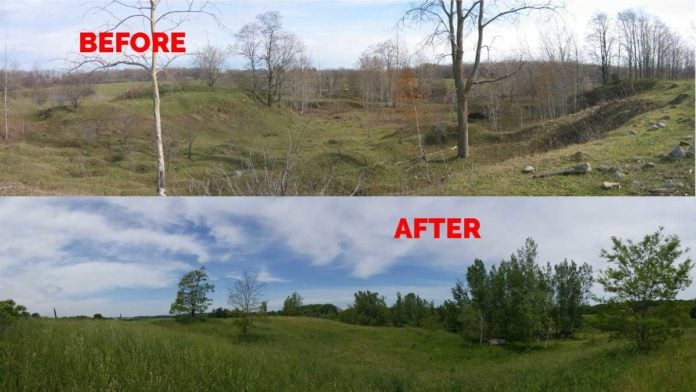 MANITOULIN—The Management of Abandoned Aggregate Properties (MAAP) program has rehabilitated more than 600 pits and quarries across Ontario covering almost 900 acres, at no cost to landowners. The approximately $12 million tab was funded by aggregate producers through a levy per tonne. MAAP technicians will be on Manitoulin this summer, reaching out to landowners of about 30 legacy sites known to be located here.

Manitoulin Island was only designated under the Aggregate Resources Act (ARA) in 2007, explained Danielle Solondz, project coordinator for MAAP. Many sites across the province, mostly in southern Ontario, were previously operating under the Pits and Quarries Control Act; those were grandfathered into the ARA. At that time, some areas in the province, mostly located in Northern Ontario, did not necessarily fall under the area. Areas like Manitoulin Island, Bancroft, parts of Sudbury, northern Hastings County, Muskoka and Thunder Bay were all designated under the ARA in 2007.

There are three classifications for sites: active, surrendered and legacy, or abandoned. Active sites are sites that are currently licenced or permitted under the ARA and follow strict guidelines outlined by Ministry of Northern Development, Mines, Natural Resources and Forestry, Ms. Solondz said. Surrendered sites are no longer extracted from as they have been rehabilitated and no longer have a licence or permit. Legacy sites are pits and quarries that were extracted from before licences and permits were mandated, and rehabilitation may not have been completed.

“Legacy sites were really used in building municipalities,” she added. “There are a lot of these wayside pits (often located in farmers’ fields), where the municipality was putting in county roads. They’re called abandoned but they’re not actually abandoned. They belong to individuals in the province.”

Those 30 sites were identified in 2009 by the Ontario Geological Survey. MAAP is sending out its own technicians because “they have a better eye for what is and what isn’t a gravel or sand pit and whether it has good potential as a MAAP project,” said Paul Hartnett, a landscape architect and construction supervisor with MAAP. Many of the sites identified in 2009 were noted as ‘landowner not interested’ at the time. The big challenge now is getting enough people signed up to give MAAP a purpose to conduct rehabilitation work here.

Once an area is identified and enough landowners have signed up for the program, the work begins. “We fly the site with a drone to do a survey and gather data,” said Mr. Hartnett. “From that, I develop site plans and calculate the cut and fill for the area we’re going to reshape, then put together the drawings that direct the contractors on what’s expected of them in terms of earth work and hydroseeding. Then we hire the contractors and I oversee construction.”

Mr. Hartnett has been with MAAP for 12 years and has completed about 350 rehabilitation projects with them. He was lands manager for a fairly large company in the aggregate industry prior to joining MAAP, and started out in landscape construction before obtaining his master’s degree in landscape architecture. He tries to accommodate people’s wishes for the rehabilitation projects but said each site is typically unique and will “lend itself to what it wants to be.”

Some sites will return to agriculture because they’re in a farm field, he explained. It works the same with naturalization sites; some sites are forested or located beside a forest or a meadow, so he tries to incorporate those things into the design. “We work with what we’ve got on site, but we are working with more advanced methods of seeding and re-establishing vegetation.”

Mr. Hartnett will discuss each stage with the landowner. Once they agree, he’ll develop a design and go over that with them, explaining exactly what’s going to happen. At that point, they’re free to change their mind. There’s no actual commitment until the landowner has signed off on the design and MAAP begins the contracted work. It’s the best program in Ontario that absolutely no one knows about, he said. “First of all, it doesn’t cost landowners a dime.”

MAAP is completely subsidized by the aggregate producers of Ontario. “Landowners don’t pay for any earth work,” said Mr. Hartnett. “They don’t pay for the seeding. They don’t pay for my design or anything else. It’s all gratis to the landowner, and it adds value to the property.”

“It’s a good opportunity for people to have some work done on their property for free, provide employment to locals and of course, when we’re up there we’re spending money on fuel, lodging and food. It’s really a win-win for the community, not just those individuals who are receiving the benefit of the work. It’s a benefit for the environment, the landowner, the local community and workers. It’s a fantastic program.”

Aggregate producers are one of the most heavily regulated and mandated industries in Ontario, said Ms. Solondz. The government oversees licenced sites and can revoke a licence when the producer is not fulfilling their obligations under the act. MAAP rehabilitates those sites as well as legacy sites.

“I think there’s a little bit of misconception too, about the rehabilitation and what they can do and what are the goals of rehabilitation and just understanding progressive rehabilitation,” she said. “The producers are all mandated to do that final rehabilitation. I think it’s just hard for people to think that it’s going to be done. You might not see results in five years. It’s probably a 50-year timeline, so I think that’s usually hard to wrap your head around.”

She noted that, especially in southern Ontario, a lot of people don’t realize that some of their favourite hiking or fishing spots are actually rehabilitated aggregate sites, as are many fields where they’re growing corn and hay. “They’re prime agriculture land and those actually used to be aggregate sites,” she said.

Aggregates get a bad rap, Mr. Hartnett acknowledged, adding, “We’re putting things back or better as best we can.”

MAAP staff will be on Manitoulin for one to two weeks starting May 16 and periodically though the summer and fall, following up on sites and setting up projects for 2023.