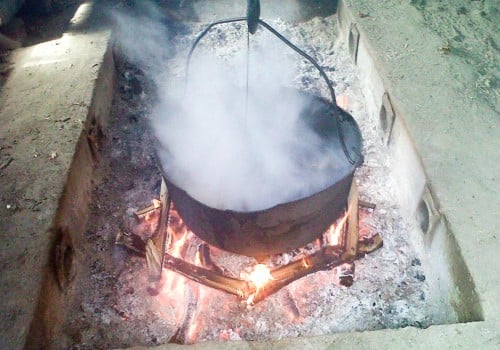 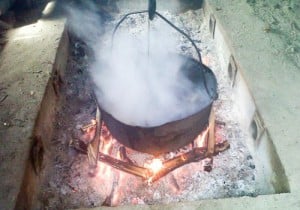 MANITOULIN—“The season was short and sweet,” was how Ed Ferguson Sr. of Sheguiandah described this year’s unusual syrup season.

Mr. Ferguson is the proud owner of a Sheguiandah sugar bush that has been producing the sweet stuff for area families since 1888, purchasing the lot for his family in the early 1980s. With the original sugar camp came a logbook, documenting the seasons since 1923, a tradition that the Ferguson family has gladly kept up. Future generations may puzzle at the notations under 2012, as the yield was a mere 25-30 percent of a typical season, Mr. Ferguson said, 50-60 quarts. During the 1940s and ‘50s, he added, nobody would tap their trees until mid-April.

The season lasted a week, thanks to a lack of frost. “By Friday (March 16) the sap had turned yellow and the trees began to bud,” he explained, noting that the maples are located on the south side of a slope, causing them to dry up quickly.

“Now, I suppose we should have tapped sooner,” he said.

“It was a great run for the five-day period,” Mr. Ferguson continued, noting that the sugar bush kept up the longstanding tradition of entertaining little ones in the ways of the syrup season, as it has done since the ‘80s, when Little Current Public School kindergarten teacher Barb Cranston would bring her class to Sheguiandah for a special outing every spring.

Mr. Ferguson noted that the sap was very sweet this year, perfect for maple sugar candy, which the family made last week.

“The first couple of days the syrup was light in colour, but there was only two days run that was really quality stuff,” he added.

“On Sunday (March 18) we had homemade blueberry pancakes with syrup and I even managed to find a patch of snow to make taffy,” he gloated.

“It’s definitely been a very unusual year, I already have some palm and date trees on order,” Mr. Ferguson chuckled.

Ashlee Manitowabi of Wikwemikong tapped 200 trees at his family’s bush lot in Murray Hill with the run starting Wednesday, March 14.

Mr. Manitowabi said the season lasted a week before they decided to stop production. “It was getting too warm and the sap was getting pretty milky,” he said. “The season normally lasts around four weeks. We usually have to do two trips on the four-wheeler every time to empty the buckets, but this year we only ever had to make one trip.”

The Manitowabi family makes syrup the traditional way, by boiling the sap over an open fire in cast iron pots, but unlike Mr. Ferguson, didn’t notice particularly sweet syrup.

“This year we’ll have to keep the syrup for ourselves,” he noted, hoping that the cold snap at the beginning of the week will yield more of the sweet stuff. “We may tap different trees and try again.”

“We had one really good day (out of a one week season),” he continued. “It’s been 30 percent of an average year,” Mr. Hayden echoed Mr. Ferguson’s figure.

“Frost is your best friend in any type of syrup production, but then the extreme warmth came,” Mr. Hayden said.

The producer does sell his syrup and the low yield is causing the price to go up this year, and to eliminate 4L pails. The price is $25 a litre from $20 last year.

“People just won’t be able to get as much as they normally do,” he said. “I’m guessing production is down across the board.”

“We’re at the mercy of the weather, and this is the extreme of that,” Mr. Hayden continued. “I’ve talked to old-time producers, and they don’t ever remember a season like that. If this is the norm, producers will have to look long and hard as to whether they even tap. For a one-week season, it’s not even worth it.”

Joan Beard in Tehkummah said she and her husband Bob only took off one small batch in a one-week period. “We had 63 buckets this year and normally it’s in the 80s,” she said.

Most of the syrup will be used for personal consumption, she added, noting that some is normally sold to the public at farmers’ markets.

The Beards had yet to take their buckets off of the trees on Sunday, as they were hoping to get a little more out of Mother Nature with the impending cold snap.

“The sap is still nice and clear,” Ms. Beard continued. “Fingers crossed that there still might be a small run, but once the buds are out and the moths come, it’s over. You really need at least one degree of frost at night to have any run during the day. The old timers say you need lots of snow and lots of cold, but that didn’t happen.”

Ted Smith of the Gypsy Family Farm in Gore Bay had over 400 spiles in production, with about 100 litres of sap, as opposed to 300-400 litres in more ‘normal’ years.

“If we get a couple of cool nights, the sap might come,” Mr. Smith said. “We need between minus five and plus five degrees, sunny days and no wind for perfect conditions and this year we haven’t had that once.”

A market gardener and syrup producer, Mr. Smith said he worries about filling his orders, that it’s going to be tight and very unlikely that there will be anything left to sell to tourists during the summer markets.

The farm had its first spiles in the second week in March, but Mr. Smith said he “can’t say there was really one day with a really good run. 2010 was a disastrous year and I thought it couldn’t get any worse, but it has.”

“But, of course, the upside is that the honeybees are already out working, coming back to the hive full of pollen, probably from the pussy willows,” Mr. Smith commented. “While it may have been a poor syrup season, it may turn out to be an absolutely great honey season. Mother Nature’s a great equalizer.” 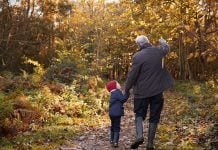