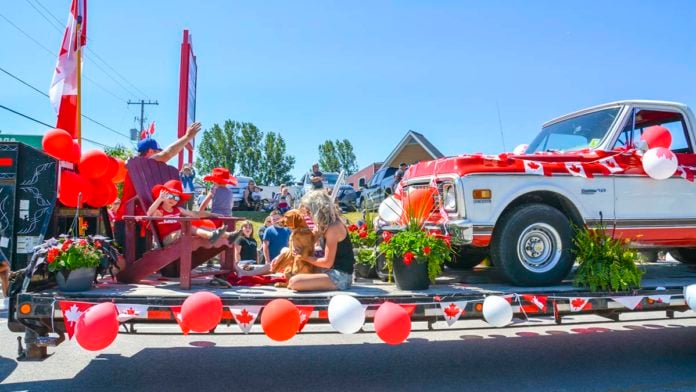 ﻿MINDEMOYA—By partnering with Ribfest and with no COVID to hamper attendance, the 45th annual Central Manitoulin Lions Club Homecoming Weekend was the most successful of all time, at least in terms of numbers of people in attendance.

“I think we had a very good weekend,” stated Dale Scott, president of the Lions Club. “And working with Ribfest was certainly a good thing. The events brought in thousands of people. When I was helping to sell 50/50 tickets for a while, I would say 80 percent of the people who were buying the tickets I didn’t know, they were visitors to the Island. And on Saturday there were more children at the (Lions) pavilion than we have ever seen before, taking part in all the activities.”

“It was an amazing weekend,” stated Lions Club member Marcus Mohr. “It certainly did exceed my expectations. We’re already in discussions for next year.”

Daniel Duval of Manitoulin Events Group which put on Ribfest stated, “It was an awesome weekend and show. I walked around the community and saw people moving around, and shopping in local stores, which is exactly what we wanted to see happen. Everyone did extremely well, and everyone seems to be happy with the way the weekend went. And everyone is excited about next year.”

“We couldn’t have done all this without Marcus (Mohr) and the Lions Club and all the volunteers, everyone helped out,” said Mr. Duval.

Mr. Scott said Daniel Duval of Manitoulin Events Group, which put on the Ribfest, “wants to come back again next year. He contracts out the vendors and he definitely wants to work with us again next year.  If we have a full day Saturday, he suggested working together on holding the dance Saturday night, with a couple of really good live bands.” With the two groups working together, “it made the weekend a really big festival.”

The lines for everything taking place on the weekend were long, but not as long as the lines for the Ribfest vendors, which featured ribbers Go Gonzalez BBQ and Brickyard BBQ. People reported to this reporter that it took in some cases as long as two and a half hours to get through the lines to buy ribs or chicken.  Mark Scarlett, one of the ribbers from the Brickyard BBQ group said, “this is the first time we have been here. For the weekend we expect to sell about 4,500 full racks of ribs.”

Mr. Scott said that the Lions were only able to work with the Ribfest organizers for about three weeks prior to the weekend. “Unfortunately there wasn’t enough time to plan everything to the hilt. We had the area for the beer garden, one ballfield and the booth for the licenced area fenced off  but people just moved the fence and walked over it to get by. Little things like this will need to be planned better next year.”

There was certainly a lot of things to take part in over the four day weekend. There was fantastic live music provided throughout the weekend, including blues, Americana, folk, rock, pop, soul, rhythm and blues, country, roots and rockabilly, ragtime blues and more,  a comedy show, a whole bevy of kids games and activities and along with the featured ribbers, other food vendors on hand. Thre was also a licenced dance Saturday evening with DJ Crash, the Brant Mathews fire eater show, and much more.

On Saturday, there were many different kids’ games held, including an ice cream eating competition, hot wheels races, and prizes handed out for each of the events.

About 20 youngsters took part in the soap box derby, held on Duke Street in Mindemoya. After many preliminary heats and qualifying races, Spencer Johnston of Providence Bay won the final championship race which included three other competitors.

Prior to the soap box derby races, Pastor Jamie Greenwood of the Spring Bay Pentecostal Church asked everyone to join in a moment of silence. Three of the cars held the names and badge numbers of the late OPP Constable Marc Hovingh, the late OPP Constable Vu Pham (the son of former Pastor Dan Thompson and his wife Terry of Providence Bay), who both died in the line of duty, and Owen McKelvie a little boy who was fatally injured in a farming accident a few years ago.

The Lions hosted a rib cook-off contest with eight local residents taking part. John Bisaillon, a member of the Swine Fellows team which won the Jack Daniels International Barbecue Invitational Barbecue competition several years ago, judged the entries. There ended up being a two-way tie between Rob Sheppard and Wayne Legge for best ribs. After a coin flip, Mr. Sheppard won the $500 first prize and the championship trophy.

Mr. Sheppard told The Expositor, “I was taught by a (former) National Hockey League player and Stanley Cup winning coach, Randy Carlyle, how to make barbecue ribs. No, I can’t tell you what the secret is.”

Everywhere you could go to take in an event on the weekend, everyone was talking about the huge crowds on hand. “It’s called decoviding,” stated weekend volunteer Wes Newburn. “Everyone is just excited about getting out and doing things after two years of the pandemic and they have been looking forward to events like this.”