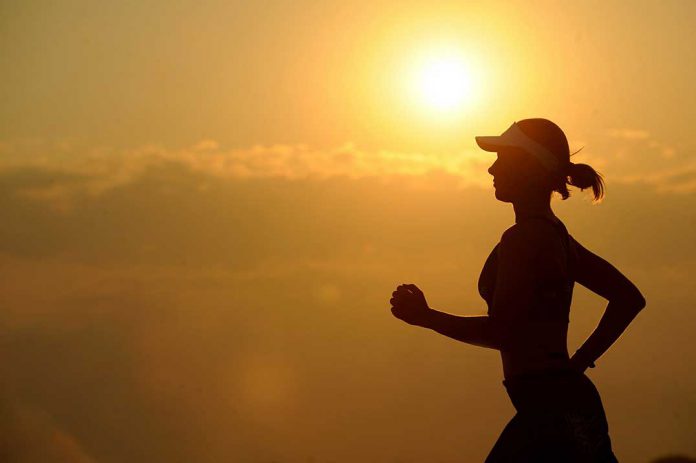 With the rise in temperatures and greening of grass, many Haweaters can’t wait to start spending more time outdoors and this includes increasing their fitness levels, especially after a winter that kept many of us indoors for far longer than we would have liked.

A popular goal is ‘couch to 5K’, or going from being completely sedentary to tackling a five kilometre jog over a span of weeks.

Popular running coach Gerry Holliday, a long-distance runner since his youth, says the key to running is to start small, set goals and keep it fun.

Mr. Holliday was in his day a marathon runner, competing in two Boston Marathons in the 1970s, placing 42ndin 1973 and 93rd in 1974—an Olympic qualifier year.

While running track for Laurentian University, Mr. Holliday was offered a scholarship by Colorado State University to join their track team and was flown to Colorado to take a tour of the campus and be wooed by the coaches. Because a teaching certificate that was viable in Canada could not be guaranteed by them Mr. Holliday turned the offer down and stayed at Laurentian. He did, however, pursue his goal of becoming a teacher and was a much-loved educator and coach at Central Manitoulin Public School.

Mr. Holliday also ran a popular after-school program known as Mini Gerries where he trained elementary school children from across the Island at the Manitoulin Secondary School track in the lead-up to the Island track and field championships held each year at Charles C. McLean Pubic School in Gore Bay.

If you’re interested in becoming a runner, “it has to be a priority,” Mr. Holliday explains. “Set a time during the day and keep it consistent. Some people like to go out before work while others are not morning people and so would prefer to run during their lunch. Others might prefer to go out in the evening—it all depends on your preference.”

It’s important to recognize what level of fitness you’re starting with and plan accordingly.

“If it’s a low level, start with a walking program,” Mr. Holliday suggests.

Joanna Rosenbaum of Manitoulin Physio Centre, and a registered kinesiologist, held popular running clinics on Manitoulin for beginners. She too suggests starting slowly.

“As with any new physical activity, it’s important to check with your doctor in order to clear you to start,” Ms. Rosenbaum states. “After that, if you’re totally sedentary, you still might want to start by putting together a few weeks of consistent scheduled activity that is low impact, such as walking, to prep your body. It should be said that sometimes running is just not the thing for everybody, but you don’t know till you try.”

Both Ms. Rosenbaum and Mr. Holliday say that a goal should be set. Try choosing one of the many fun runs Manitoulin has to offer, such as the Mindemoya Classic (a triathlon with a running component), Haweater Fun Run or the famed Wiky Road Race held each October, and work towards becoming a participant in it.

Next, would-be runners should work on incrementally increasing the time they spend in the running phase. Using telephone poles is a great way to start. Walk from one pole to the next, then jog the next pole-to-pole sequence and so on. Eventually you can increase the number of poles you run to the number you walk.

“The (incremental) approach is designed this way to allow your body (the musculoskeletal system as well as your cardiovascular system) the appropriate time to adapt to running and build up endurance and strength little by little and make it so you don’t hate it on the first or second try,” Ms. Rosenbaum says. “The goal is sustainability versus doing too much too fast, which is uncomfortable and could lead to injury and leads most to stop prematurely and just quit.”

Mr. Holliday agrees. “Don’t overdo it early. There’s nothing worse than being injured and having to go back to square one. It can be really defeating.”

“Start small and make small goals in an effort to get to that long-term goal,” he continues. “It’s kind of like the January 1 diet. Most people eventually give up. If you miss a day of jogging, don’t just quit.”

Both runners suggest finding a partner to jog with—someone who is a good motivator, will help keep you accountable and “ensure you get to cross off those squares on your calendar when you’ve had a good workout,” Ms. Rosenbaum says.

Adding some cross training into your routine is also beneficial, such as hiking or going for a bike ride. This switches things up, works a few different muscles and keeps things interesting.

When it comes to injury prevention, Ms. Rosenbaum suggests 180 beats per minute (bpm) running cadence, meaning shorter and faster steps. “This naturally tends to encourage a midfoot strike, avoiding the shock of a hard heel strike plant which means less stain on tendons and joints and improves efficiency because you’re also avoiding the braking effect of hitting the ground hard with the heels. You also tend to be in contact with the foot directly under you versus out in front of you.”

Derek Debassige is a registered physiotherapist and clinic director/owner of the Manitoulin Physio Centre in M’Chigeeng. He says that running injuries often begin as symptoms of pain or irritation after activity. “Consult early with your manual medicine practitioner of choice (physio, chiro, athletic therapist, osteopath) to limit progression of the issue. Seeking treatment early to manage the condition can minimize treatment time and cost, minimize time off due to dysfunction and/or pain. An assessment of gait (aka walking mechanics) and equally, if not more importantly, running mechanics are components of a solid treatment and prevention plan. Start your running season slowly with adequate rest between outings and plan a reasonable progression in duration, pace and terrain.”

Part and parcel of a person’s gait is the shoes they wear and Mr. Holliday and Ms. Rosenbaum could not extol enough the virtues of having a good pair of shoes. Mr. Holliday says he sometimes sees people selling their used running shoes on Facebook buy and sell sites, and that makes him cringe.

“Don’t buy cheap shoes,” he says, noting that shoes do have a shelf life.

For a good document on picking a running shoe for your needs, visit TheRunningClinic.com.

Most important, the pair say, is making it fun.

May the road rise up to meet you! 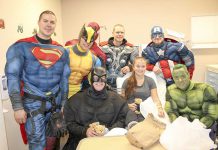 Two Haweaters on Sudbury police to be superheroes for little heroes