This is a digital mental health tool for police patrol response to members of the public in an acute state of crisis. This police force joins 13 others using the program in Ontario, is the first in Northern Ontario to implement this procedure and is the only First Nation police force to do so.

HealthIM was announced by the OPP Commissioner in 2014 to implement the interRAI system for police. InterRAI was originally the International Resident Assessment Instrument used in the long-term health care system. InterRAI is used in 35 countries for vulnerable people through a seamless, all-inclusive assessment system. Networks include Acute Care (iNAC), Integrated Care and Aging (iNICA) and Mental Health (iNMH.) The first world interRAI conference was held in Toronto in 2016.

Here on Manitoulin, the system was rolled out at the UCCM Anishnaabe Police Force building in M’Chigeeng on September 22. Social Navigator for the force, Daughness Migwans, facilitated the conference which saw the inclusion of many community partners. Attending the roundtable discussion were representatives from Mnaamodzawin Health Services, M’Chigeeng Health Services, Mnidoo Mnising Mental Wellness Crisis Response, Manitoulin Health Centre and Health Sciences North and were welcomed by Police Chief Rodney Nahwegahbow who was pleased to announce the operation of this new tool for his police officers. Ms. Migwans is implementing and overseeing the program which, she said, will take a holistic approach to assist those in need and will be effective and efficient.

Police on patrol now have the assistance needed to improve their response to individuals with unmanaged mental health struggles and who find themselves in dire straits. The research for this program was done by Dr. Ron Hoffman, a retired Toronto Police constable, retired Ontario Police College mental health instructor, and assistant professor at the School of Criminology and Criminal Justice at Nipissing University. He is an Associate Fellow of interRAI serving on the international Network of Mental Health. Dr. Hoffman has also been named an expert witness on police training as it pertains to responding to persons with serious mental health disorders. He is a co-developer of the interRAI Brief Mental Health Screener (BMHS), an instrument designed to standardize police officer observations of mental health individuals and assess mental health issues, thus allowing for improved transitions from police custody to health care.

As stated at the seminar, HealthIM assists Canadian Police Services to improve their response to individuals with unmanaged mental health challenges in an acute state of crisis. The BMHS is a structured interview tool that focusses the officer’s attention on behaviours that are statistically likely to correlate with violence. Officers can use the information gathered and, as Chief Nahwegahbow stated, their professional judgement as to whether the person in crisis should be incarcerated or entered into hospital or community resource care.

The software, installed both in cruisers and on officers’ cell phones allows for fast decisions to be made. The screening and documentation tool utilizes objective observations of behaviour. Officer risk analysis can lead to a referral to an immediate trip to the hospital for care, to community resources or to incarceration. Hospitals, where the program is in place, have reported significant value and benefit from participating in the system.

The HealthIM program is also in effect in Saskatchewan and was implemented in Manitoba in nine police agencies on October 1.

At times, the second most calls received by the police are in regard to mental health issues. 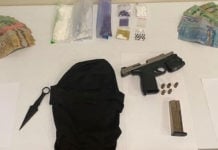