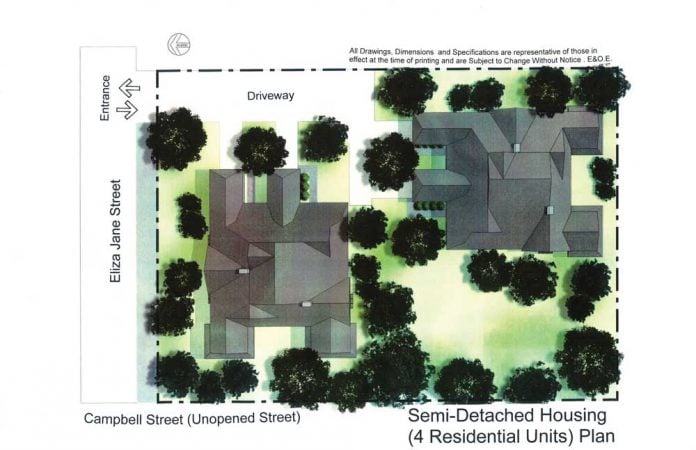 PROVIDENCE BAY—Architect Peter Favot is hoping to drum up interest in a new approach to cottaging in Providence Bay.

The concept—four semi-detached units at Eliza Jane and Mutchmor in Providence Bay (the lot located next to the Toots and Murray McDermid family home)—has been approved by Central Manitoulin and the Manitoulin Planning Board, now Mr. Favot is hoping for some buyers.

Mr. Favot originally hails from Sudbury and is familiar with Manitoulin and, now, especially Providence Bay as this is the place his daughter has chosen to call home. He picked Providence Bay for the project because of the “natural amenities there and the big beautiful beach,” as well as the character of the community.

“Instead of the idea of living on the beach, this is living in a town with a huge beach that you don’t have to maintain,” he told The Expositor. “That’s efficient.”

He said most of the cottages in Providence Bay are tucked away in the woods. This development is more front and centre—a slightly more urban approach (Mr. Favot is also an urban planner).

“It’s a new way of looking at cottages,” he said.

The units will be winterized and can be used for four seasons.

Mr. Favot has a theory that more and more, urban folk will be looking to spend more time closer to nature on places like Manitoulin.

“There is a realization that the new urban and electronic worlds are not self-sufficient,” he explained. “There is also a need to ‘hug a tree’ and enjoy the sensory world of the unhurried small towns. At the same time, the concepts of the summer cottage, holidaying and work are changing.”

“The previous approach was a cottage on the waterfront located deep in the woods, devoid of neighbours and used primarily during the two to three summer months of the year,” Mr. Favot continued. “The newer approach is the small seaside town approach of an all seasons cottage not on the water, but a cottage located in a small town within walking distance of large public beaches, with sand dunes, boardwalks and with access to the arts, hiking, bicycling and other social activities—seaside small-town living that is not limited to the summer season, but one that partakes in all four seasons.”

“It is now possible, due to electronic communications, to live and work in both worlds—six months in the bustling urban world and six months in the small town unhurried sensory world,” he added.

To contact Mr. Favot, email him at Peter Favot Architect and Urban Planning LTD at theprovbayresidences@gmail.com.