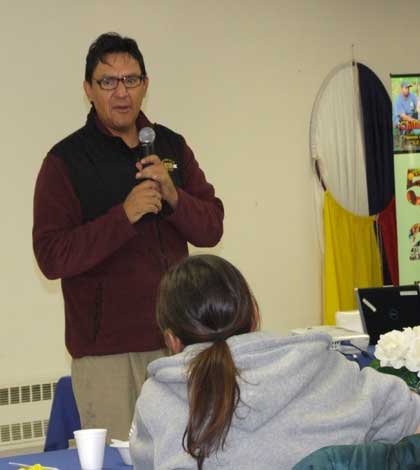 AUNDECK OMNI KANING—Urban polling (aka Nordic walking) has been gaining in popularity across the globe since its inception as a method of off-season cross country ski training, particularly since the use of the poles much catapult the health benefits and calorie burn of walking, with hardly a blip of noticeably greater effort.

The November 6 Unite for Diabetes workshop sponsored by Noojmowin Teg at the Aundeck Omni Kaning community hall featured a host of seminars for people dealing with various stages of diabetes, including a presentation on Urban Poling by Louise Hickey.

Urban poling is somewhat different than the original Nordic walking regime, generally utilizing collapsible poles that can be adjusted to suit different heights and encompassing a range of exercises an urban poler can work on without even leaving their chair.

Exercise is an important weapon in the arsenal in the battle against diabetes and the regulation of blood sugar.

Other seminars at the all day Unite for Diabetes event included ‘My Dialysis Options’ by Adrienne Barrett, RN, from Health Sciences North Sudbury; ‘Heart and Stroke’ by Stephen Lundquist of Toronto, CCRP; ‘Hyperglycemia’ by Angela Shawanda, RN, Noojmowin Teg diabetes wellness nurse; and a diabetes panel facilitated by Debbie Shawana and Albert Larieviere.