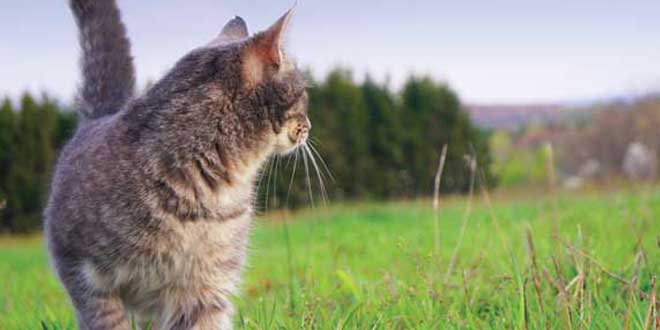 AUTHOR’S PREFACE: There was a day when this article would have opened with one of literature’s best known poems to a lady’s man. It was written by the poet T.A. Daly in his satirical, lilting tribute to a certain Giuseppe, the Barber. At present, however, since the poem was penned in a strong American/Italian dialect many find it offensive. Consequently, with its lack of ethnic consciousness it is no longer seen as appropriate for today’s press.
To respect present conventions, we offer a totally different and hopefully inoffensive kind of lady’s man, although one whose description slips from the lip with much the same cadence as Daly’s original. Furthermore our alternative has many of the same attributes and is every bit as vainglorious in his pursuit of the ladies as was Giuseppe. Surprisingly, however, our substitute comes from the animal kingdom for he is our tomcat, our so-called “That Cat,” who in the end proved to be a much finer creature than Giuseppe ever was and this is his story.
“That Cat” was a lady’s man.
He was wide of the shoulders and slim of the hips and he leapt lightly into the fray.
He was polished of grooming and black of mustache and none could deny him his way,
For his were the ladies and his were the spoils and he kept all contenders at bay.
All knew when his time was upon him for his nightly screech ravaged the streets and his battles
they shattered the day.

Such, at least, was ‘That Cat’ in his prime but over time it became evident his tomcatting ways were taking a serious toll on the aging marauder. Each year he returned from the ladies to his post on the farm so increasingly raddled of ear and staggering of gait we began to wonder how much longer he could endure.

Although the old fellow had previously garnered little personal attention among the rest of the farm stock in the barn, now his depleted form, stretched out motionless and “limp as a dishrag” in the straw of the thrashing floor, prompted our concern. Soon we found ourselves tempting him with eggs beaten into warm milk still frothing from the milking and finally he rallied enough to locate a more nurturing place to recover. He crawled up onto the broad, chaff-covered backs of the penned cattle where he’d lie in their thick curly warmth twitching in his sleep – no doubt dreaming of the day when he’d leapt easily up ladders and generally pursued his duties as all good tomcats reared to a work ethic do.

Gradually we, in the kitchen, began to hear news of his revival with such comments as, “That Cat” had his mouth wide open, down begging for milk directly from the cows at milking today.’ And later, “That Cat” had his big paw on a mouse over behind the feed-mill this morning.’ And finally, ‘‘That Cat” has started coming up to the house. He’s taken to soaking up the sun on the kitchen’s black roof where it slants down over the back step. He might like a bowl of scraps at the bottom of the clothesline pole where he goes up.’’

Thus apparently ‘That Cat’s’ and our lives were blending in a small way—although never so much that he became a pet. He simply spent some time nearby, ate his bite at the base of the pole and remained his own man. But one noticed him and even though he went back to his work in the barn daily and to his old habits generally it was decided for discussion purposes he needed a proper name. With our wish that he would continue to “come home” safely to our Bailey farm, the name of choice could be none other than Bill Bailey and a very appropriate name it proved to be.

Bill Bailey had a contrasting counterpart on the farm—our very lovable and admired dog, Casey. Both he and the cat were working animals but Casey distinguished himself as a gentle, smiling, hardworking border collie as opposed to our rough and tough Bill Bailey. While neither could be described as a pet, Casey came much closer to being one. He remained near the house where he kindly received a pat on the head from time to time while Bill Bailey favored the barn and never welcomed so much as a tender touch.

Casey, who had been given to us when his owner moved away, was a pedigreed aristocrat with a registration and beautiful body to prove it. Not only did he look the part of a border collie, he was genetically coded for his role, which unfortunately presented him with a problem. It is perhaps not common knowledge that border collies are bred to herd animals and will languish if denied the opportunity. Since we had neither flocks of sheep nor ranging herds of cattle requiring herding, Casey was denied the opportunity to apply his skill. Consequently he substituted by “running herd” on the farm—and he did this through his master, Les Bailey, my husband.

As the phrase goes, Casey “dogged” Les’s footsteps, resting during daylight hours only when Les did. After meals he took a short nap on the earth leading up to the back steps whenever his master took his “forty winks” on the couch within. Not to be totally left out, Bill Bailey occasionally joined them on the warm roof above. Thus through the turning seasons from spring work to autumn harvests, Casey patrolled the farm and all the while kept his eye out for trouble. Consequently the farm and the farmer prospered and Casey’s herding instincts would seem to have found sufficient outlet.

This, however, was not quite the case for after his master retired for the night Casey surprisingly became a “moonlighter” and undertook a seemingly almost surreal task. He positioned himself under the window of the youngest child nearby where he’d doze, keeping vigil until daybreak. There he stayed each night until another babe was born in the neighbourhood, when he would relocate to the younger child’s window. We never knew how he determined when there was a new arrival and we can only assume he believed he was there to keep the youngest child herded safely within. Although his behaviour made us wonder, we knew one thing: Casey earned great admiration throughout the area for his outstanding devotion to our farm and all who dwelt around it.

“If it moves, it wears out.” So goes the old saying and so it went with Casey. One summer the multiple miles he’d traveled began to take their toll. A badly deteriorating hip gave him a decided limp and a sidling gait that quartered him off to the side. Although he still smiled when patted, his drooping posture and his slower, crippling pace told the tale of his decline all too clearly. Even more distressing, he eventually lost his eyesight, convincing us with its awful truth – our Casey really was wearing out, and all we could do was grieve.

Despite his condition, however, Casey wasn’t through with us yet. There were days when, apparently, hearing the cattle bawling at the barn he would not only cripple blindly toward the sound, but go to the damp field beyond. There he’d “run” on and on without realizing the effect of his deteriorating side was drawing him around in a large circle—creating a watery trench that grew broader and deeper, and much muddier with each punishing revolution. Although we rushed to his rescue whenever we noticed this happening, there were occasions when we were not as timely as we wished in spying his predicament and in bringing his poor muddied form home.

But one could not always be present. After Les and I had to be away together for what unexpectedly turned out to be one whole day we returned to find our exhausted and mud spattered old fellow collapsed on the earthen ramp at the back step. Fortunately, someone else had been nearby and had rescued him. We needed to increase our surveillance somehow.

His hazardous circuiting happened next after I’d taken a pill for a bad tooth. When I awoke and rushed out to look for Casey, what I observed occurring in the field was such an example of supreme animal intelligence and compassion it left me awed. Unexpectedly, there to the rescue had come Bill Bailey who stood rubbing his big warm body against our forlorn Casey’s mud spattered face and chest. And that wasn’t all.

As Bill Bailey proceeded to back away a step, Casey with his nose still buried in the cat’s warm fur, took an accompanying step—and another, and another until with nudging encouragement and one backward move after another, the cat finally enticed Casey to a spot where the old dog could be urged up out of the depths of his ditch. Then having brought the blind old dog onto solid ground, Bill Bailey turned his own body around so Casey now followed his whisking tail and high rump all the way to the house. Once there, the exhausted dog was allowed to collapse onto the earth at the back step while Bill Bailey leapt onto the roof above his old friend for a while. It was now obvious who’d brought Casey home the day we’d been away.

At last, knowing the old cripple’s welfare was safely in Bill Bailey’s tender care we felt able to lighten our surveillance somewhat. And so over time it proved, until came the day when a terrible tomcat yowl brought us out the screen door. From there we could see a bedraggled Bill Bailey frantically scrambling in a section of reeds he’d flattened at the edge of the nearby scum-covered swale. After hurrying down we discovered to our despair Casey’s lifeless form mired in the water’s treacherous depths. There, freed of his pain, our poor restless collie had gone to his eternal rest.

After proving what great love can exist between species, Bill Bailey resumed his duties and his old ways, but it wasn’t long before he followed Casey. One day a neighbour brought the sad evidence to our door. While attempting to cross the highway after visiting his ladies the crippled old fellow had been struck down by a car. Bill Bailey had come home for the last time and his passing broke our hearts.

But he left us a legacy. We are surrounded by a number of his offspring. His ancient daughter, our present ‘That Cat,’ still sleeps by my recliner where I spend my declining years while, Sam, one of his grandsons, lives at our daughter’s house nearby. We are aware he has other descendents in the neighbourhood for on occasion at night we hear an all too familiar screech rattling the streets, while a litter of kittens “all polished of grooming and some black of mustache” has appeared in our barn.

In the end we settle, knowing as his line goes on so does our great-hearted Bill Bailey – although at times we are haunted by the familiar old refrain: