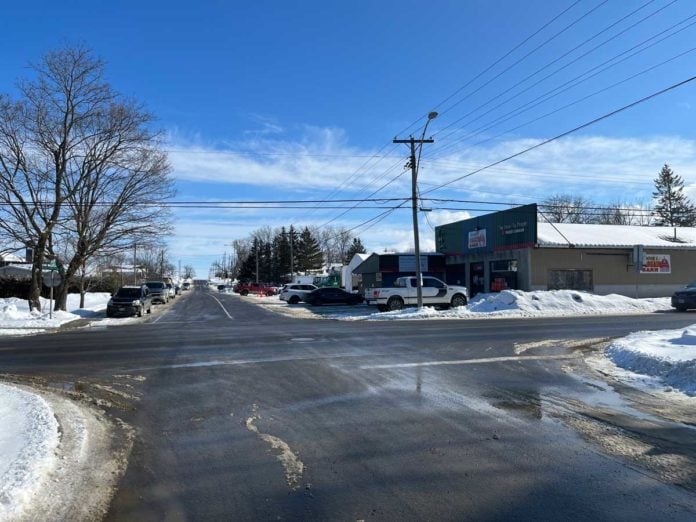 LITTLE CURRENT—The topic of an increase in traffic on Little Current’s Vankoughnet Street, and what to do about it, was discussed at length during the February 1 meeting of the Northeast Town council.

The item was put on the agenda by Councillor Dawn Orr at the behest of some concerned taxpayers, she explained.

CAO Dave Williamson admitted that the corner of Vankoughnet Street (at Barney’s) and the highway “can pose a problem.” He explained that, currently, public works is not clearing the parking spot closest to the stop sign on the north side of Vankoughnet Street in the hopes it helps traffic heading west to see what’s coming along the highway, but he did note that the Island Funeral Home needs all the parking it can get, too.

Playing the devil’s advocate, Councillor Orr suggested a one-way street, which elicited an audible “uggghhh” from Mayor Al MacNevin. “I can envision the Facebook comments now,” he said.

Councillor Laurie Cook said she agreed the traffic was a problem and has witnessed two accidents there in the past year.

Councillor Jim Ferguson said after the last major snowstorm on Manitoulin, he worked as a fill-in driver for provincial highway contractor Emcon and he used that throughfare to get from Highway 540 to Highway 6.

“It was an act of wizardry” to get the plow through there with the wing and plow up, he said, giving kudos to the public works crew for managing through that area with the plow down.

Mayor MacNevin said that history shows that the majority of accidents happen when drivers back out of spots in front of Barney’s front doors and into cars parked on the north side of the street. A one-way street wouldn’t necessarily stop this, but would just make it easier for through traffic to get from one highway to another.

Mr. Williamson explained that Barney’s currently exceeds the number of parking spaces required by bylaw, also noting that “a one-way street will accomplish nothing.”

“We’re living with the consequence of a business in a residential area,” the CAO added.

“When that place is busy, quite frankly, it’s a disaster zone,” the mayor said, likening it to a grocery store parking lot, “only it’s a road.”

Councillor Al Boyd added that a one-way street sounds good in theory, but reminded council that Vankougnnet Street is a busy thoroughfare that contains other businesses.

Rodney Deforge, proprietor of Barney’s Bargain Barn, admitted that the street does see levels of high traffic, but said 60 to 70 percent of the people visiting the area are actually attending the free centre located next to the store.

“I have been asked by people to help direct traffic, or place cones, but I don’t own the property,” Mr. Deforge told The Expositor, noting that the former store, Tim’s and Co., saw busy levels of traffic, too.

He noted that Vankoughnet Street is also home to funeral home parking, the hospital, Legion and more. “This is not something I would remotely say is solely our fault,” Mr. Deforge added.

“We’ve done everything we could,” he continued, explaining that he plows the snow after snow events to ensure that his 20 or so parking spaces are cleared and trims the snowbanks to help line of sight.

Mr. Deforge said he has a good working relationship with his neighbours, saying that if the funeral home is expecting a large turnout for a funeral he will close the free centre early to allow for ample parking for funeral home guests.

“At the end of the day, people have to take responsibility for their own actions,” he continued, asking people to be vigilant drivers and noting that the last accident on Vankoughnet Street was the result of a drunk driver. “That certainly didn’t have anything to do with our store.”