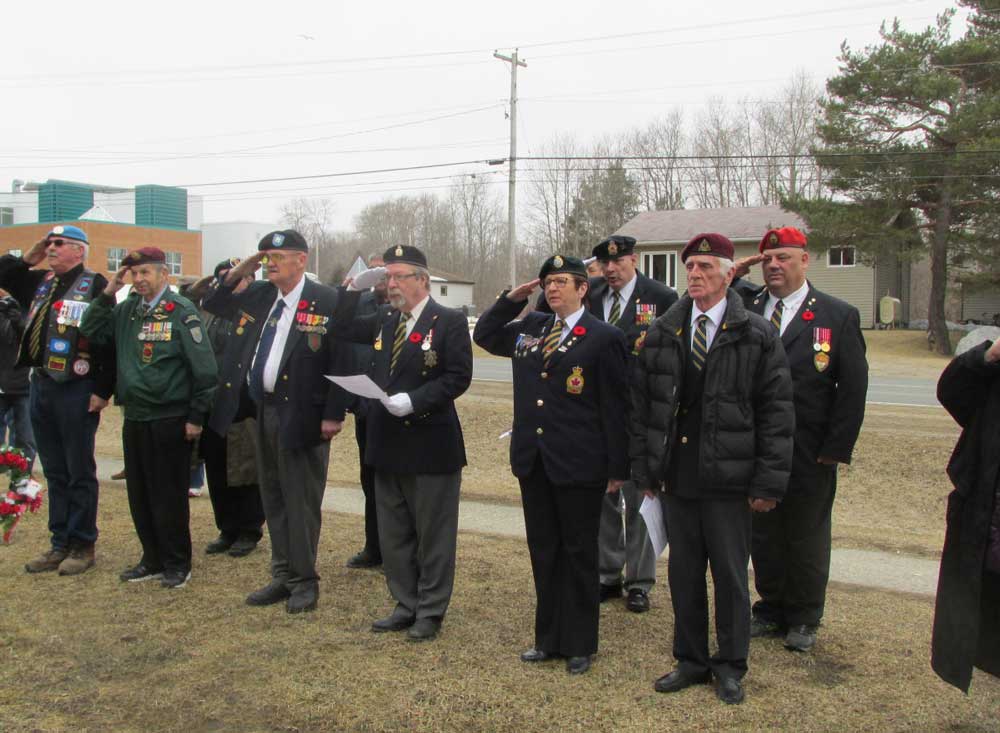 MINDEMOYA—Ninety-eight years ago, the World War One battle of Vimy Ridge took place in France as part of what was known as the Conflict of Arras. The fight, which pitted four divisions of the Canadian Corps against the German Sixth Army, lasted from April 9 until April 12 and saw the capture of the land by the Canadians as essential to stop the enemy’s movement and to allow the advance of the British troops.

Over 3,500 Canadian soldiers died in this conflict, but two men who did return home safely at the end of the war were David Migwans and David Wezo Debassige, both of M’Chigeeng. On April 9, these men, as well as others who fought and died in the Great War, were honoured with a tribute held at the cenotaph in M’Chigeeng under the direction of Colin Pick, the president and CEO of the War Pensioners of Canada (WPC). Mr. Pick gave a tribute to these veterans following an opening prayer and smudge ceremony and opening remarks by Terry Debassige, who was filling in for Chief Joe Hare. The service also saw the reading of the names on the M’Chigeeng cenotaph and the laying of wreaths by band members and WPC and Royal Canadian Legion (RCL) family members as well as the recital of the Act of Remembrance.

Ken Migwans of M’Chigeeng was at the Vimy Ridge ceremony and explained that his grandfather David served as a sapper with the Army Corps of Engineers. As such, he was a combat engineer who would move ahead with other sappers to prepare the way for the following troops. These individuals would perform duties ranging from bridge building, road construction, securing water and so on to facilitate the movement of the advancing Corps members and also to use measures such as the laying of mines to stop the advancement of the enemy.

Mr. Debassige also talked about his grandfather and his service for Canada. He explained that his grandmother said that David was a quiet, shy man when he went off to war but was a boisterous individual when he came back. Mr. Debassige shared a story of his grandfather’s experience at Vimy Ridge. “As you know,” he remarked, “horses were used extensively throughout the conflict and one day the shelling killed my grandfather’s horse and he was thrown and lay stunned on the ground. His buddies tried to drag him to safety as they thought he was severely wounded, but it was only that he was covered in the horse entrails.”

Mr. Debassige went on to say that his grandfather, who lived well into his seventies, was severely wounded by shrapnel around the area known as the slagheap after Vimy Ridge.

The Vimy Ridge ceremony also saw the reading of the iconic poem In Flanders Fields, written by Lieutenant Colonel and Canadian physician John McCrae and recited by Comrade Brian Sprack, as well as a closing prayer and recital of God Save the Queen. The service attendees then went on for fellowship and lunch at Seasons Restaurant in M’Chigeeng.