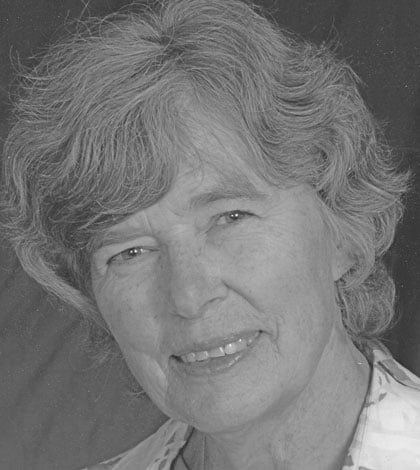 Proverbs 3:6. In all thy ways, acknowledge Him and He shall direct thy path.

Vivian Marie Pilmanis passed away quietly in her sleep on December 28, 2013 after a lengthy illness. She was greatly loved by all who met her, and is remembered for her enthusiasm for life, adventurous spirit, infectious laughter, great sense of humor, creative talents, and positive outlook on life. She was a joy to family and friends and will be greatly missed. Vivian was born in Mindemoya, Ontario, Canada, and grew up in Sudbury, Ontario. She loved to help people. After completing high school and her Registered Nursing degree, she practiced nursing in British Columbia, Bahamas, California, and Texas. While in Vancouver, Canada, Vivian was certified in scuba diving and this sport became a life-long adventure. She moved to Southern California, and in 1970 she married Andrew Pilmanis. Vivian worked both in nursing and for United Airlines as a flight attendant, which permitted her to scuba dive and sky dive in Hawaii between flights. She and her husband travelled widely. Their passion for diving and boating took them to many interesting places, including living in an underwater habitat in the Bahamas for a week, twice. In 1972, they moved to Two Harbors on Catalina Island where they both worked at the University of Southern California Catalina Marine Science Center. Vivian became a certified Diving Instructor and was the Diving Officer for the Center. She participated in underwater physiology research with her husband, worked as the nurse for the Catalina Hyperbaric Chamber facility in the treatment of diving casualties, and was instrumental in establishing a unique one-room schoolhouse at Two Harbors. On their 41 ft. sailboat they cruised extensively in the California Channel Islands. Their children spent their younger years at Catalina and learned at an early age to sail, fish, and dive. In 1989 the family moved to Bulverde, Texas and Vivian continued her career in nursing at the Methodist Hospital in San Antonio. She was very active for many years in the Baptist Church. The family continued to travel widely, including the UK, Alaska, Panama, various Caribbean islands, Canada, Latvia, and Hawaii. She is survived by her husband, Andrew, and their two children, Jennifer Hutzler (Julius) and Bret Pilmanis (Patricia). They have three grandchildren, Hayden and Aubrey Hutzler and Clayton Pilmanis. Vivian is also survived by her mother, Marjorie Marshall, and her three sisters: Maureen Allen, Beverly Perigord, and Debra Shelswell. In lieu of flowers, donations to Michael J. Fox Parkinson’s Disease Research (in Canada or USA) are suggested. Friends and family are invited to attend a graveside service at Mindemoya Cemetery on July 26, 2014 at 1 pm.

…Simply take Him to your heart

And let Him dwell inside

Then through no merit of your own

With you He will abide.

The road is not an easy one

All who are on it will tell

But the great reward is eternal

With Him, all will be well… Vivian Pilmanis