SHEGUIANDAH FIRST NATION—On Thanksgiving weekend, a mother and daughter, members of the Sheguiandah First Nation, felt the need to share their gift of thanks and a strong message with family, friends and the people of the community.

Last Friday, Sharon and Jen Waindubence held a Thanksgiving feast at the community centre in Sheguiandah, which saw 60 people attend, and although not everyone who was invited was able to come, the pair was happy with the turnout. In fact, the mother and daughter have a whole lot to be happy about these days.

In two months it will be a year since the Waindubence women were in a car accident on the Sagamok First Nation. They were visiting friends that Friday in mid-December, merrymaking with the holidays so close at hand, when they made a fateful decision to get into a car with a drunk driver.

Sharon explained that she doesn’t remember the trip to Sagamok at all after the car lost control on an icy hill during a snowstorm, sending it careening into the ditch. The last thing she remembers is being at home while daughter Jen remembers all of the terrible details, including watching the driver run off, leaving them to fend for themselves, as well as the sound of her mother choking on her blood in the back seat of the car.

“I thought he was our friend,” Jen said of the driver, anger in her voice.

The crash left Jen’s foot pinned and she wasn’t able to get out of the car until first responders released her with the ‘jaws of life.’ The other passenger made the risky move of moving Sharon to stop her from choking, despite not knowing if spinal cord damage had occurred. Thankfully it hadn’t, but the elder Waindubence spent the following week in coma at the Sudbury Regional Hospital, and both spent Christmas and New Years in a hospital bed.

The two women still bear both the physical and emotional scars of what happened to them that night. Jen still needs crutches to get around, for the time being, as her ankle was badly damaged that night and was probably made worse, she said, by tugging at it to try to get out to help her mom. She still attends physio sessions twice a week.

Jen points out that her mom has suffered short term memory loss since the accident and a couple of times during the interview Sharon stops and tries to remember her line of thought, getting frustrated with herself when she can’t remember.

“I get so emotional now,” Sharon said. “Before the accident, I would bottle up my feelings, but now I just let it out.”

The mother urges people to pay close attention to the television commercials by Mothers Against Drunk Driving (MADD) or the LCBO, “just stay where you are for the night or call a friend. Never get into a car with a drunk driver or try to drive yourself.”

“You really don’t understand until it happens to you,’ Sharon added. “I learned I could have died and it seems like my family still doesn’t want to overwhelm me with the details. The community knows too, but it just comes out in little dribs and drabs.”

The women both agreed that it was a shame that it took something so awful to make them aware of the dangers and to bring the family together, saying most of the family rushed to Sudbury as soon as they heard what had happened.

While Jen was released on January 10, her mother had been released earlier, on New Year’s Day. Sharon said she returned to an empty house. “All I did was sleep,” she said.

They spoke of the many services that were made available to them, as well as the work the community did to make their new reality a comfortable one. The band quickly built Jen a ramp for her house, gave her a wheelchair and a housekeeper and Mnaamadzowin Health Services supplied them both with a personal support worker (PSW) and meals on wheels once a week.

“There’s so many services out there that can help you,” Jen said. “If Mnaadmadzowin wasn’t there, I don’t know what I would have done.”

Sharon agreed the health organization provided an important role, and the band too. She pointed out that Sheg sponsored the feast for them as, on limited income, it wouldn’t have been a possibility otherwise.

“I could have died or been in a wheelchair permanently,” Sharon said. “Your body is so fragile and death is just a breath away, you know?”

The mother shared that she has been sober since the accident—almost a year. “It’s sad to say, but it was a real awakening for me,” she explained. “Drinking was a way of coping with life.”

“Now,” she continued, “I speak from my heart how I feel. I don’t bottle it up. Jen notices the changes especially—now I call it like I see it.”

Sharon said she no longer lets others take advantage of her and while she doesn’t miss the alcohol, she stays away from those who do drink.

“There were so many times when I tried to quit drinking and now I’m just living one day at a time,” she continued, noting that she has been attending Alcoholics Anonymous meetings.

“I worry about Jen too,” she said, glancing across the table at her daughter. “She’s so fragile now. What happens if she’s drinking and falls and hurts herself even more?”

Jen explained she was sober too for the first six months after the accident, but the stresses of life got to her and she began to drink again, but this time she’s careful of who she’s with or where she goes.

She continued, saying she feels closer to her family now too, since becoming sober. “Before, I felt so distanced from them.”

Sharon said that while she was unable to work for some time after the accident, she is back working part-time with the band, which has been very accommodating to her health concerns. “I’m happy,” she said with a smile.

The idea for the Thanksgiving feast came from discussion with Jake Ago Neh, a traditional healer in the community, they explained.

“My family said how nice it was to come together and eat and be together on a good note,” Jen said. “We were celebrating life, not death.”

The women showed a long list of all those who received personal invitations to the feast, including the doctors and emergency crew who tended to them during that time and while they were unable to attend, they did send their thanks.

“This was quite the life lesson,” Jen said. “And I guess it happened that way for a reason.”

“You should be close to your family no matter what,” she urged. “There are so many things that we take for granted. If it wasn’t for all these people, we wouldn’t have made it,” she said, pointing to the list.

“I don’t want this to happen to anyone else,” Jen added. “It was so traumatizing—we came so close. Drunk driving is still happening, but it’s up to the individual to make that decision. Don’t get in that vehicle or stop someone if they are. You could change someone’s life.” 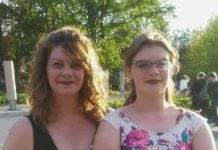 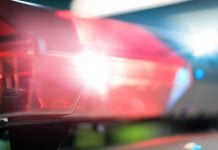 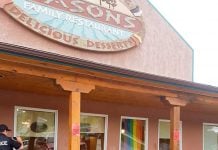